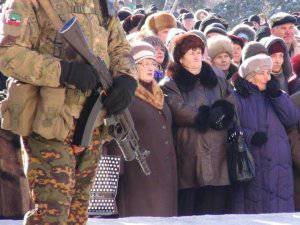 Leaders of the self-proclaimed ‘Donetsk people’s republic’ have responded to the generally catastrophic humanitarian situation in Donbas and mounting disgruntlement by staging ‘rallies’ with the enticement being free food and / or products sold at very cheap prices.   Although the ‘rally / market’ in Makiyivka in recent days was ostensibly in support of local producers, the goods used to bring in a crowd were very likely from so-called ‘humanitarian aid’ sent from Russia to areas under militant control.

There was a distinctly Soviet feel to both the events and the manner in which they were reported.  The DPR official website, for example, mentions that after the rally in Makiyivka, Andrei Purgin gave a press conference on burning current issues.  Not one question (or answer) is mentioned.  Instead we are told that the rally was preceded by a concert programme, “met with applause and ovations from the Makiyivka residents gathered on the square”.  There was also a ‘market’ where people could buy goods at significantly lowered prices.

This was precisely the ploy used to bring people out during the pseudo-elections on Nov 2.  Then, as on Dec 7, food items in short supply altogether were sold dirt cheap, and free food handed out.  When people have not been paid or have not received their pensions for months, and the entire infrastructure of the area is in ruins, the incentive is great.

Similar rallies, though seemingly on a smaller scale were reported at Nizhnya Krynka and Khartsyzsk.

Any wish to ask hard-hitting questions or express disgruntlement was surely tempered by the armed militants standing around with machine guns.  As reported, these armed thugs are known to have previously ‘arrested’ at least one person intrepid enough to ask one of the DPR leaders Pavel Gubarev about the militants’ unfulfilled promises.  If any tough questions were asked at these staged ‘rallies’, they were carefully edited out of the perfect propaganda video produced by the Russian pro-Kremlin newspaper Komsomolskaya Pravda.