The Soviet echoes in the prevailing atmosphere of fear and intimidation in Donbas are most chillingly seen in the widespread use of ‘denunciations’ with accusations as empty, but potentially fatal as in Stalin’s times.

Civic initiatives trying to obtain the release of hostages held by Kremlin-backed militants in eastern Ukraine have addressed a plea for help to former hostages.  Vostok-SOS and Donbas-SOS write that hundreds of people are believed to be in the hands of the militants but with information scant, and the militants often moving them from place to place, it is next to impossible to negotiate their release.  They ask those already freed to contact them since any information they may hold could help to save a life.

It is likely that the ‘official’ list of people missing regularly updated here only covers those formally reported missing.  Families may simply not know that a person has disappeared, or be trying to secure their release through private contacts.

People can be detained – or worse – for trivial reasons like being out without a passport, or for no reason at all.  On Nov 28 Oleksandr Polivanov from Naholno-Tarasivna in the Luhansk oblast and a friend were drinking beer in a bar.  In the argument that arose because some local ‘Cossack’s’ and another armed and drunk militant thought the young men should be ‘at the front’, Polivanov was shot in the stomach and died soon after in hospital.

Said Ismagilov, Mufti of the Spiritual Directorate of Muslims of Ukraine and himself from Donetsk writes that it’s hard to know whether to laugh or cry.  A distant relative from Donetsk told him that she had been at the market and bought up some items to last a while.  The bag ended up very big and the vendor whispered to her that she shouldn’t risk buying so much food – “in DPR” [the so-called Donetsk people’s republic] “they don’t eat so much”.  They transferred the products into several bags, but that didn’t help and when she got near her apartment block she was met by the old ladies “who are the main fans of the ‘Russian world’.  The woman had to endure a grilling about where she’d got the money, what she’d bought, etc. There was no question of not answering since these women are notorious for their swift ‘denunciations’.

That intrepid shopper got away lightly.  People have been ‘arrested’ for criticizing DPR leaders like Denis Pushilin or Pavel Gubarev. Any suggestion of support for Ukrainian unity can get a person into trouble.  According to civic activist Anna Mokousova, the use of denunciations on a wide scale began in June.  You don’t like your neighbour so ring the self-proclaimed Luhansk People’s Republic [LPR] hot line and tell them that he or she is ‘for Ukraine”.  There was also a new wave of militants, more like armed fighters, she says, who would drive to specific addresses and without any explanation take people away. 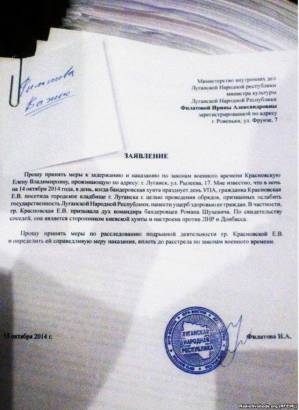 The first two documented denunciations, Radio Svoboda writes, were at the beginning of October.  One is from Iryna Filatova, so-called LPR ‘minister of culture’ though best known for rather provocative poses in a bikini.   It reads:

“Please take measures to detain and punish according to martial law Olena Krasnovska who lives at [address].  I have learned that during the early hours of Oct 14, 2014 when the Bandera-supporting junta celebrate UPA [Ukrainian Insurgence Army] Day, Krasnovska visited the local Luhansk cemetery in order to hold rituals aimed at weakening the statehood of the Luhansk people’s republic and to damage the health of its citizens. She called for example on the spirit of the commander of the banderivtsi Roman Shukhevych. According to testimony from her neighbours she is a supporter of the Kyiv junta and against LPR and Donbas. Please take measures to investigate Krasnovska’s subversive activities and assign just punishment, including execution, according to martial law”.

Radio Svoboda managed to ascertain that this elderly woman, denounced by ‘neighbours’ with whom she had lived for decades as in the worst years of the Stalinist Terror, aroused suspicion as a teacher of Ukrainian and supporter of the relatively small Donetsk EuroMaidan.

A Donetsk regional police report speaks of a 27-year-old woman who got the militants onto her own parents who have now disappeared.

One resident, for obvious reasons identified only as Dmytro, recounted how a young woman who had been close to the militants from the outset and was now living with one of them used her friends in DPR to come and take away a person whom she had borrowed money from and didn’t want to return and her own father who had told her to behave properly and pay back the loan.

A logical development, probably, that the militants sent and / or funded by the Kremlin should be reinstating some of the worst traditions of the Soviet Union whose collapse Russian President Vladimir Putin memorably called the greatest catastrophe of the twentieth century.