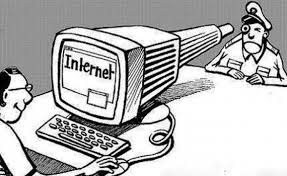 With Russia's censor having found Facebook worryingly willing to block information about a protest in support of beleaguered opposition figure Alexei Navalny, it is now trying to censor a Ukrainian website.

Roskomnadzor, the Russian body effectively responsible for censorship, has threatened to block the Ukrainian website GORDON if it does not remove information about protests planned in Moscow on Jan 15 in support of opposition leader Alexei Navalny and his brother.  Most worryingly, Facebook has already given in to similar demands

Roskomnadzor, the Russian body effectively responsible for censorship, has threatened to block the Ukrainian website GORDON if it does not remove information about protests planned in Moscow on Jan 15 in support of opposition leader Alexei Navalny and his brother.  The two are facing long sentences in the latest prosecution widely seen as politically motivated.

Gordon simply informed that such protests were planned, however this was enough for Roskomnadzor to assert that the report contained “calls to mass disturbances, extremist activities and to participation in mass events carried out with infringements of the established order.” 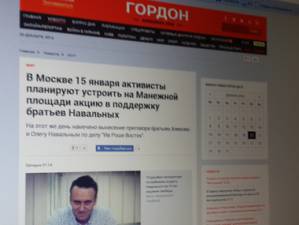 Screenshot of the material Roskomnadzor is threatening to block the site over, although it only reports plans to hold a protest

The Russian censor’s letter to Gordon received on Dec 20 demands the removal of the material within 24 hours and states that this is on the basis of a demand from Russia’s Prosecutor General’s office.

Olesya Batsman, GORDON’s Chief Editor says that the editorial office is at present consulting lawyers.  She is dismissive of what she calls “the absurdities that the Kremlin dictatorship comes up with out of fear of losing power” but is concerned that readers “accustomed to receiving honest and objective information from us” should not suffer.  She says that the site is read by more than 1 million visitors from Russia.

Opposition activist and anti-corruption blogger Alexei Navalny and his brother Oleg were formally charged with fraud on Oct 29.  This latest of many prosecutions against one of President Vladimir Putin’s main critics alleges embezzlement of up to 26 million roubles from Yves Rocher, a further 4 million from the Multidisciplinary Processing Company, as well as the laundering of 21 million roubles.

Alexei Navalny is under house arrest, his brother on a signed undertaking not to leave the city.  The prosecution is seeking 10 years for Putin’s opponent, 8 years for his brother.  The court is due to issue its sentence on Jan 15 and it is on that day that protests are planned in Moscow and St Petersburg.  By Dec 20 Russian Internet readers were unable to access the Facebook page of the Moscow protest.

The fact that Facebook has clearly complied with a demand from the Russian authorities has caused anger and concern.  Washington Post was blunt in calling the move “a sign of new limits on Facebook’s ability to serve as a platform for political opposition movements”.

This is not the first time that Roskomnadzor has threatened to block foreign media, including Ukraine’s Glavkom and the BBC if they do not remove information about peaceful protests planned in Russia.

In August 2014, the Russian censor threatened to block at very least 17 Russian or Ukrainian media, as well as the BBC, over entirely innocuous material about the planned march in Siberia under the slogan “We’ve had enough of feeding Moscow!”.  The protest was aimed only at calling for greater autonomy enabling the people of Siberia to: introduce benefits and wage supplements for people living in harsh climactic conditions; introduce a regional component to the tax on extracting precious metals, resulting in a fairer divide between local and federal budgets; and exercise their constitutional right to their own authorities who are more independent of the centre, rather than having all decisions taken by the government in Moscow.

That march was banned, as was another equally in line with the Russian Constitution.  Even more repressive measures have been taken against similarly peaceful initiatives in Krasnodar.  Three people who tried to hold a peaceful march in support of ‘federalization for Kuban’ have been placed on Russia’s Federal List of Terrorists and Extremists.  One is presently in custody, two have fled the country (one is expected to receive asylum in Ukraine).

In August a German web hosting provider Hetzner Online AG informed the Ukrainian information agency Glavkom that the latter would be blocked within 24 hours if it didn’t comply with Russia and remove the material.  Glavcom refused, and the enormous publicity forced Hetzner Online to consider its reputation and turn down the Russian prosecutor’s demand.

It seems that the Russian censor is concerned only with blocking information available to the Russian audience regardless of the impression such clumsy attempts at bullying and threats have on the country’s reputation.  On Sept 22 Roskomnadzor again demanded that the Ukrainian site Novy Region remove two items about the march, published in August.  One of the reports suggests that “the Kremlin is in a panic” and describes the Russian authorities’ actions in response to the planned march.  By Sept. 23, the Moscow-based Sova Centre reported, the material could not be accessed in Russia.

Roskomnadzor’s heavy-handed reactions can seem comical in countries accustomed to free access to information, however its activities are increasingly directed at crushing the few independent media sources in Russia.

In late October the independent radio station Ekho Moskvy was warned over ‘extremism’ for its report on Donetsk airport siege.  The formal Roskomnadzor warning accused Ekho Moskvy of ‘extremism’ and claimed that the material in its Oct 29 programme “With our own eyes” [Svoyimi glazami] “justifies military or other crimes”.  Another such warning within the space of a year can be used to close one of the last bastions of critical journalism in Russia.  Examples of the material in question can be found here.  The two Russian journalists denied key themes of Russian propaganda and presented Ukrainian soldiers as defending their country.  This in Roskomnadzor Newspeak was ‘justifying war crimes’.