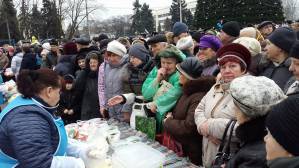 As the UN and numerous NGOs warn that Donbas is facing a major humanitarian crisis, with the most vulnerable in danger of starvation, militants from the self-proclaimed ‘Donetsk people’s republic’ have resorted to coercion and bribery to pull off propaganda stunts in the centre of Donetsk.

On Dec 20 a mass gathering officially to mark ‘Day of Solidarity’ was held in the centre of Donetsk.  The web publication OstroV has posted a document which, if authentic, shows that educational, medical and other public sector institutions were simply told that each institution needed to send 150 people to the event. The letter sent out to these bodies states that by 12.00 on Dec 19 the full name and contact information must be provided of the person responsible for the attendance of these employees and a list of those to be present.

Such compulsory appearances at various ‘rallies’, etc. were common under the presidency of Viktor Yanukovych.  Then people went out of fear of losing their jobs.  That may still be a consideration, however with armed militants everywhere and numerous people having disappeared after asking questions or in other ways annoying those wielding power, people may well have feared other consequences for refusing to attend.

In any case, there was an incentive to be there since food items, almost certainly from Russia’s so-called ‘humanitarian convoys’, were sold for much lower prices.

News of Donbas also reports that the ‘DPR’ militants ordered that all schools in Donetsk send children to Lenin Square on Dec 20 for a ‘New Year concert’.

The events had presumably been coordinated with the Kremlin as one of the trucks in the latest Russian ‘humanitarian convoy’ was labelled as carrying children’s gifts.  Alexander Zakharchenko, head of ‘DPR’, announced that the ‘convoy’ contained more than 100 thousand children’s presents and claimed that Donetsk businesses had contributed the same number.

Zakharchenko claimed that they would do everything to ensure that these ‘first New Year festivities in the Donetsk people’s republic would pass happily, with smiles and joy”.  All the children would be handed presents, he added.

And very little else.  The situation in the areas under militant control is near critical.  The militants have shown skill only in pillaging, violence and killing, and are clearly unable to provide for the population in areas under their control.  Russia has proven lavish in providing arms, military technology and men, as well as propaganda, but no real measures to ease the suffering caused by the undeclared war it is waging.   On Dec 15 the UN High Commissioner for Human Rights reported that: “the breakdown in law and order as well as the violence and fighting in the eastern regions,  fuelled by the inflow of heavy and sophisticated weaponry as well as foreign fighters, including from the Russian Federation, has had a direct impact on all fundamental human rights, including the security, liberty and well-being, of individuals living there”.  “The conflict is in its ninth month and the situation is becoming increasingly dire for the population still living in the east.”

There have already been reports of people dying of starvation and the numbers are likely to increase.  With winter setting in, people already seriously weakened by months of hardship, will also be susceptible to illness, and that in conditions of medical shortages and numerous other difficulties.

The situation is especially critical because of the announcement by Ukraine’s government back on Nov 7 that from December (extended now to Dec 31) pensions and social benefits will only be paid out to people registered in areas under government control.  The UN report also indicates concern at this decision.  It points out firstly that the registration of internally displaced persons does not have the capacity to cope with the increased inflow of IDPs following the adoption of this policy.

“The situation of many people, including those held against their will, in areas under the control of the armed groups may well be life-threatening, ” said High Commissioner Zeid. “The Government of Ukraine remains responsible for protecting the human rights of all Ukrainians, including the right to health, education and social security, in all its territory, including areas it does not fully control. I urge the Government to carefully consider the human rights impact of this decision.”

With the Kremlin-backed militants of the so-called ’republics’ concentrating on propaganda stunts at which supposed ’humanitarian aid’ is sold,  and the Kremlin showing no sign of releasing its grip, the human rights aspect could indeed not be more grave.