Russian, or else: On how Russia is foisting its citizenship in CrimeaCrimean Tatars and others face citizenship dilemmaRussian methods: Calls for Crimea’s return to Ukraine could get you imprisonedMGIMO historian fired for article comparing Crimean annexation to Hitler’s AnschlussInformation channels at warDonetsk Front in Putin’s Dirty WarScurrilous rumours used to spread fear and distrust in Eastern oblastsAutoMaidan activist shot at near ChongarRussian troops already deployed in mainland UkraineThe Crimea is our Home: Get your troops out!Crimean "referendum" a grotesque farceCrimean Tatars call on all Crimeans to boycott "referendum"Avoiding Ukraine’s language minefieldsChief Rabbi and others dismiss Putin’s “anti-Semitic extremist” claimsRussian propaganda must be challengedWestern Media: Don’t distort the situation in Ukraine!Russia’s aggression poses dangers beyond Ukraine’s bordersCrimea: Anti-Semitic card and other provocation in time of siegeMr Putin: We ethnic Russians and Russian speakers don’t need protectionDangerously orchestrated Crimean exercise
• Topics / Freedom of movement

Transport blockade of Crimea a Gift to the Kremlin? 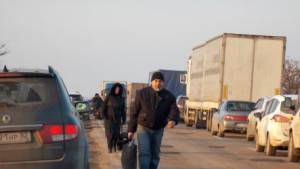 At a time when enthusiasm for Russian rule in the Crimea is likely to be on the wane, Ukraine’s temporary transport blockade has aroused panic among ordinary Crimeans, but also bemusement at the excuses given and criticism of an unlawful restriction of people’s rights

The Ukrzaliznytsya [Ukrainian Railways] statement from Dec 26 calls the restrictions “for passenger safety”.  It announces that trains normally heading to Simferopol, will stop in Novoaleksiyivka or Kherson, and that the trains via Ukraine between the Crimea and Moscow have been cancelled. There is a similar ban on freight.

At a press conference on Saturday, Andriy Lysenko from the National Security and Defence Council’s information centre told journalists that the restrictions were temporary and aimed at preventing “groups of saboteurs pretending to be peaceful citizens” from reaching mainland Ukraine.  “Diversionary acts” are taking place almost every day, he said.

There have been a spate of explosions over recent days, and there have long been well-founded grounds for believing that Russia is using the Crimea (as well as the part of the border under militant control) to provide arms, equipment and men to the Kremlin-backed militants in eastern Ukraine, and probably also for attempts to destabilize the situation in Odessa.

How this justifies a blanket ban on transport is considerably less clear.  Britain and the USA, for example, have both faced terrorist attacks over recent years.  The attacks have led to a tightening of security, not to a ban on people leaving or entering their countries.

The ban between mainland Ukraine and the Crimea is not absolute.  The Border Guard Service has said that individual cars can travel through, and there are also reports that despite the cessation of coach services announced on Dec 26, some coaches are still running.  These are, however, small details against a background of major disruption to people’s plans, especially coming on the eve of New Year and Christmas.

Radio Svoboda’s Crimean Service reports the plight of up to 80 conductors and other railway staff stranded in Russia because of the ban on further transport.  They have received no support in Russia either, and have been left in cold carriages, with food supplies already used up.  Staff told Radio Svoboda: “We understand that there are force majeure situations, we’ve been in various situations over 25 years of work. But such an attitude where we’re not needed by anybody for the first time. The head of the train rings, and nobody listens to him. We’re a ghost train”.

Radio Svoboda also reports voices of protest against the ban.  Aslan Omer Kyrymly from the Mejlis, or representative body of the Crimean Tatars, is scathing of the reasons given, pointing out that there remain hundreds of kilometres of uncontrolled border between Ukraine and Russia.

“By turning Crimeans into islanders and isolating the Crimea from the mainland, Ukraine risks not being understood by its own citizens. If its aim is speedier integration of the Crimea with Russia, then they’ve chosen their methods well.”

Yulia Tyshchenko from the Ukrainian Independent Centre for Political Research, suggests that the move may be used in energy negotiations with Russia, as well as those over the situation in Donbas.  She also feels that the temporary restrictions are likely to work against Ukraine with the Russian propaganda machine and the self-declared regime in the Crimea extracting dividends from an unpopular decision.  Ukraine, she warns, will be presented as the cause of social and economic ills, although she believes that those Crimeans who have been against annexation may, on the contrary, see the move as positive.

Well-known Crimean human rights defender Olha Skrypnyk is blunt in her condemnation of the move. She says that the restrictions violate Ukrainian citizens’ right to freedom of movement and to family life, especially coming, as they do, at a time when families would be uniting for important festive occasions.

“Such actions cannot be seen as in the interests of Crimeans, whatever political interests they’re based on”.

Human rights activists are planning a protest against the move on St Sophia Square in Kyiv.

The announcement that all coach and rail transport was being stopped came just days after Russia cancelled trains to the Crimea due to low demand.  It has also coincided with the dramatic fall in the value of the rouble (now used in the Crimea, as well as Russia); the exit of Visa and Mastercard from the Crimea in the face of increased international sanctions and severe power cuts.  Ukraine is suffering a major power shortage due in no small part to the fact that coal from Donbas areas under Kremlin-backed militant control is being smuggled to Russia.

Over recent months the Crimea has had every reason to understand, despite Russian political hype and media propaganda, just how dependent the peninsula is – for energy, water, food products, etc. – on Ukraine.  All of that should act in Ukraine’s favour, unlike the ban on transport.

Russia’s annexation remains illegal and the Crimea still part of Ukraine, making moves to prevent Crimeans from travelling to other parts of the country both counter-productive and illegal.