Russia puts forward Navalny verdict out of fear of protests 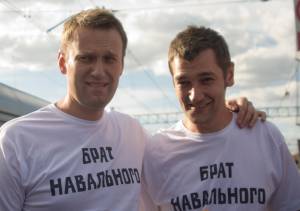 Opposition politician and anti-corruption campaigner Alexei Navalny has announced on his blog that the authorities have put forward the verdict due to be passed on him and his brother to Tuesday, Dec 30.  The move seems very obviously aimed at trying to forestall the planned public rally in support of the Navalnys on Jan 15.

Navalny writes that people had suggested that the court hearing might be brought forward, and verdict handed down “more suddenly”, but he’d considered such a situation “in principle impossible”.

Not so, it appears, and he and his brother Oleg have been informed on Monday afternoon that the court hearing will be on Tuesday, at 9.00.  Any protests, aside from single person pickets will thus be illegal.

This is not the first sign that the Kremlin is determined to imprison Navalny while trying to prevent peaceful protest against such repression.

Just over a week ago, Roskomnadzor, the Russian body effectively responsible for censorship, threatened to block the Ukrainian website GORDON if it did not remove information about protests planned in Moscow on Jan 15 in support of opposition leader Alexei Navalny and his brother.  It is not known how many Russian sites were threatened in similar fashion.

Particular concern was aroused at the time by clear evidence that Facebook had given in to such demands and blocked the Facebook page about the planned protest.  Washington Post was blunt in calling the move “a sign of new limits on Facebook’s ability to serve as a platform for political opposition movements”.

GORDON had merely informed that such protests were planned, however this was enough for Roskomnadzor to assert that the report contained “calls to mass disturbances, extremist activities and to participation in mass events carried out with infringements of the established order.”

Alexei and Oleg Navalny were formally charged with fraud on Oct 29.  This latest of many prosecutions against one of President Vladimir Putin’s main critics alleges embezzlement of up to 26 million roubles from Yves Rocher, a further 4 million from the Multidisciplinary Processing Company, as well as the laundering of 21 million roubles.

Alexei Navalny is under house arrest, his brother on a signed undertaking not to leave the city.  The prosecution is seeking 10 years for Putin’s opponent, 8 years for his brother.