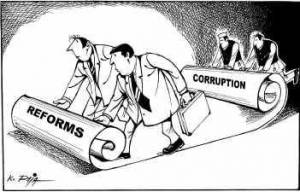 Mykola Khavronyuk, leading specialist in criminal law and member of the board of the Centre for Political and Legal Reform, has written a blistering critique of draft law No. 1990 on amendments to legislation regarding the planned National Anti-Corruption Bureau.  The bill was tabled in parliament by Yury Lutsenko on Dec. 27.  Concern over aspects of the bill has also been expressed by KHPG lawyer Gennady Tokarev.

In his article published in Ukrainska Pravda, Khavronyuk says that he is against an Anti-Corruption Bureau in the form set out in Lutsenko’s draft bill which he says has no place in a civilized country.

Despite what he sees as serious flaws, the bill was added to the Verkhovna Rada agenda a day after being registered.  This is in marked contrast to the bill drawn up by the anti-corruption group of the Reanimation Package of Reform which should, in his view, be adopted as a matter of urgency, but has effectively been shelved.

Both Khavronyuk and Tokarev are critical of the proposal to supplement the Criminal Code with Article 351-1: Failure to comply with demands from the National Anti-Corruption Bureau of Ukraine.

Tokarev points out that introducing a new ‘crime’ to the Criminal Code is illogical since the actions covered by this article have elements of an administrative offence (misdemeanour), not a criminal offence.  A number of administrative offences of a similar nature are included under Articles 188-188.45  and 185.3 of the Code of Administrative Offences [CAO].  He adds other articles of the CAO which are no less socially dangerous than not complying with the demands of the Anti-Corruption Bureau (166-9 infringements of the law on preventing and countering legalization or laundering of money obtained by criminal means, or financing terrorism and others).

He writes that in any case “such an increase in the status of the National Anti-Corruption Bureau [NAB] over all other pre-trial investigation bodies whose officials [investigators] are authorized to carry out pre-trial investigation and even over prosecutors with increased liability for not obeying the legitimate demands of only the NAB has no legal basis, and would only give it the status of some kind of ‘body over others’”.  If the legislators wish to bring in criminal liability for one, he adds, they should introduce it for all such bodies.

Khavronyuk takes a slightly different angle, but effectively criticizes the same point.  Failure to comply with demands from an authority, even if these be legitimate, cannot per se be considered ‘socially dangerous behaviour’ and according to Article 11 and other articles of the Criminal Code “a crime can be only a socially dangerous act”.

Khavronyuk has perhaps one positive thing to say about the new draft law, namely, that with regard to article 368-2 “Illegal enrichment”, it removes the direct link between liability for illegally enrichment with untruthful declarations.  Without this, application of the new norm would have been delayed for a full year and a half – until April 1, 2016 (officials’ declarations are submitted at the beginning of April each year).

The bad news is that the new draft bill goes against the standardized terminology of the new anti-corruption legislation, and introduces new terms “with undefined or content which is unclearly, incomprehensibly defined or contradictory”.  This, he notes, will have extremely negative consequences.  He mentions the terms ‘property’ as opposed to the present ‘unwarranted benefit’ which does not have to be in money or material form.  This, in addition, will lead to clashes with other parts of current legislation.

A formidable list of such terms at variance with other anti-corruption legislation is provided, as is a huge number of inevitable clashes with other norms.

Regarding amendments to the Criminal Procedure Code [CPC]

Amendments which would introduce the position of NAB ‘detective’ and given them powers both as investigators and as staff of operational divisions (in particular, amendments to articles 40 and 41 of the CPC)

Tokarev believes that a merging of the two functions will inevitably lead to a reduction in the quality of that role carried out by the ‘detective’ which is not his or her specialization.

Once again he points out the lack of grounds for giving such merged powers to only staff of the NAB.

Tokarev warns of danger in the proposal to give the head of an NAB operational division the power to freeze (albeit for 72 hours) property or accounts of individuals or legal entities in financial institutes. This power is the prerogative of the court (170 § 2 of the CPC) and the change would carry the risk of abuse of power.

There are no rational grounds, he adds, for deferring application to an investigative judge for seizure to up to 24 hours from when the head of an operational division carried out the arrest.  This should be changed to “immediately, but no later than the beginning of the next working day of the investigative judge”.

Tokarev writes that even if the proposed amendment remains, there must be an added requirement that if the investigative judge refuses to allow an application for the arrest of property, the prosecutor must ensure that urgent measures are taken to withdraw the arrest, including of money in the accounts of individuals or legal entities in financial institutions.

Regarding 208 § 1.3 of the CPC (this stating: “if there are well-founded grounds for believing that this person will evade the investigators”)

This added justification for extending a temporary preventive measures is, Tokarev says, in breach of Article 29 § 3 of the Constitution which permits such extensions only where there is an urgent need to prevent or stop a crime.

Giving an NAB official such power without a court ruling would enable them to decide at their own discretion whether there are such ‘well-founded grounds’ and “would therefore give them virtually unlimited powers to detain a person without a court order and would effectively negate Article 29 § 3 of the Constitution.

Tokarev points out that the current situation regarding such operations is regulated by Article 272 of the CPC and allowed only in the case of grave or especially grave crimes.  Creation of a criminal organization constitutes such a grave crime (as per Article 255 of the Criminal Code).  This means that per se the amendment proposed which gives the investigators the right to use such illicit operations to uncover criminal activity by an organized criminal group makes no sense.  The amendment, he warns, would simply serve to enable bodies fighting organized crime to improve their statistics by concentrating on less grave crimes rather than really fighting organized crime.

Other amendments proposed include to the articles regarding resolution in criminal cases via agreements.

Tokarev finds incomprehensible the proposal to extend the possibility of applying such agreements to especially grave corruption offences. If this is mercy, he says, to people who are destroying the foundations of Ukraine’s system and the principles of rule of law, then there must at least be a mandatory condition that they pay compensation for the damage caused.  He finds quite unacceptable the proposed amendment to Article 462 § 1 which would allow for compensation to be partially or totally waived as part of such an agreement.

The proposed addition of new articles 472-1 – 472-3 envisaging special types of agreements in criminal proceedings regarding corruption, are also criticized.  Tokarev writes that as well as indicating a tendency towards leniency with respect to such crimes, the articles are clearly out of sync with the existing system of law, in which imposition or waiving of punishment, withdrawal of a criminal record, etc. are regulated by Ukraine’s Criminal Code.

The new articles would entail additional rules for allocating punishment and new grounds for waiving basic and additional criminal punishment, withdrawal of criminal record, criminal liability, etc.  Such attempts to override the normal procedure and traditional regulation via the Criminal Code are, Tokarev says, absolutely unacceptable.

The possibility of using amicable agreements even where there is no admission of guilt “where the person has provided information about corruption offences already committed, unresolved or being planned” (Article 472-1) gives the prosecutor virtually unlimited discretion on applying this norm since any information provided by the person including information of no value for preventing or solving a crime can be grounds for reaching an amicable agreement.