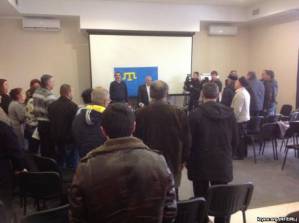 Overt attempts by paid thugs to cause a fight and give a pretext for stopping the conference were thwarted, and its participants able to adopt an appeal to the UN on grave violations of their rights under Russian occupation

On Jan 17 around 30 athletic louts or ‘titushki’ attempted to disrupt the Second All-Crimean Conference on Crimean Tatar Rights in Simferopol.  The almost certainly paid thugs – who included both Crimean Tatars and Russians – appeared in the hall, interrupting speakers, pushing people, shouting and throwing insults around.  A smaller group remained outside.

QHA reports that they also tried to provoke fights attacking the main organizers of the conference.  The latter, however, simply raised their arms up demonstrating that they would not succumb to provocation.  There were some police officers present, but they did nothing. There were also some people in plain clothes who are presumed to have been from the Russian FSB or security service. 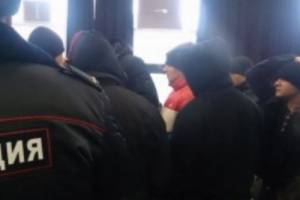 The organizers finally stopped the conference and called for a proper police unit to vacate the premises.  After that, it seems, the conference, organized by the Crimean Tatar Human Rights Committee, was able to continue.   There were 40 participants, including Nariman Dzhelyal, Deputy Head of the Mejlis or representative assembly of the Crimean Tatar people.  The Head of the Mejlis, Refat Chubarov, has been banned from the Crimea by the Russian occupation regime.

The head of the Committee, Eskender Bariev, who is also a member of the Mejlis, later told the Internet publication15 Minutes that he suspected (effectively self-proclaimed) members of the Crimean Council of Ministers to be behind the attempt to stop the conference. He said that he had earlier seen some of the young men together with an official from the Council of Ministers, but did not identify the official.  Bariev mentioned also that one of the participants in the conference had received injuries during the clashes, however they were not taking the matter further.  “Let it be on the conscience of those who organized all of this”, he said.

Radio Svoboda reports that the conference unanimously adopted both a resolution, and an appeal to the Secretary General of the United Nations, Ban Ki-Moon. In the latter they report infringements of the rights of the Crimean Tatars under Russian rule.

The text says that for over 230 years the Crimea was subjected to Russian occupation, first under Catherine the Great in 1783, then in February 2014.

“As a result of the latest seizure of the Crimea, the indigenous people – the Crimean Tatars have become an object of terror and physical violence. Young people, usually Crimean Tatars, have begun disappearing in broad daylight. They have later been found killed or have not been found at all, and are still missing”.

The latest crime against the Crimean Tatars, they say, is the use of intimidation, deceit and various manipulative measures to foist Russian citizenship on them.   This, in fact, is a major problem for all Crimeans who do not wish to take on Russian citizenship.

The participants also express concern at the attempts to register males for military service which they believe will specifically target young Crimean Tatars.

“Do not allow the Russian government to take our children away into their army”, the appeal reads.   Appeals are also planned to the Ukrainian and Turkish governments.

Repressive measures against the Crimean Tatars, and the Mejlis began soon after Russia annexed the Crimea.  The first death was of Reshat Ametov, who was taken away by paramilitary thugs while holding a solitary protest against Russian invasion.  His badly mutilated body was found on March 15.  Despite there being a video of the abduction, nobody has been arrested over his murder.

In April Mustafa Dzhemiliev, veteran Crimean Tatar leader, former head of the Mejlis of the Crimean Tatar people and Ukrainian MP, was banned from entering his native Crimea by the Russian authorities.  The 5-year-ban first reported, then denied by high-ranking Russian officials, became a reality on May 2 and 3.  The peaceful protests which took place at the Armyansk border crossing between mainland Ukraine and the Crimea on May 3 are still being used as a pretext for repression, accusations of ‘extremism’ and serious prosecutions with 4 men facing highly dubious charges which emerged only six months later.

As mentioned, there is a similar ban in force against the head of the Mejlis.

The Crimean Tatars were also prohibited from holding other events, including to mark Human Rights Day on Dec 10.

A major offensive has been launched against the Mejlis itself with the occupation regime clearly trying to crush a body which it has tried and failed to force into submission.

It seems clear that Moscow and its occupation regime in the Crimea are trying to silence dissent among Crimean Tatars or force them into exile.