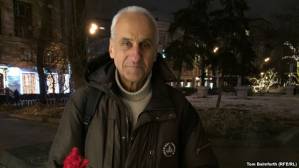 “I’m a simple, unpretentious man in the street. But this is my country. Someone has to speak up when the emperor has no clothes, " says 75-year-old Vladimir Ionov, who now faces five years in prison.

Vladimir Ionov has become something of a fixture at anti-Kremlin protests in Moscow. And now this could earn him up to five years in prison.

The 75-year-old pensioner and activist is the first to fall foul of tough new legislation providing for stiff jail terms for those who repeatedly attend unsanctioned demonstrations.

Those detained at unauthorized protests are usually briefly held by police, charged with a misdemeanor, fined, and released. But under legislation that came into force last summer -- just one example of how the Kremlin has toughened up laws targeting protesters in President Vladimir Putin’s third term -- those detained for such infractions four times within a six-month period now face criminal prosecution.

And Ionov, a member of the opposition Solidarity movement, has been detained four times since September. But he says he is not fazed by the prospect of a potential 1 million ruble fine ($15, 500) or up to five years in prison.

"I’m not a warrior, ” said Ionov, who suffers from high blood pressure and a heart condition. “I’m a simple, unpretentious man in the street. But this is my country. Someone has to speak up when the emperor has no clothes. I mean really, how much longer can this go on?"

Ionov was twice detained in September for holding anti-Putin placards at demonstrations.

On January 10, he was one of two pensioners arrested for holding up a “Je Suis Charlie” sign near the Kremlin walls. And on January 15, Ionov was among 15 protesters detained at an unsanctioned rally in support of opposition leader Aleksei Navalny.

He was informed that he faced the criminal charges for violating protest laws four times after his latest detention.

Ionov, who has already been fined 170, 000 rubles ($2, 600) for his January protests, said he is under no illusions that his advanced age will protect him from a prison sentence. He noted how he read in the opposition newspaper Novaya Gazeta about an ailing 85-year-old man who was sentenced.

"He was brought to court lying down for them to sentence him, " Ionov said. "I’m not surprised about anything that happens in this country."

Ionov, who is free for the time being but not allowed to leave Moscow, said he doesn’t intend to curtail his protest activity.

"I’ve lived here for many years. I have nowhere to run. I’m not content for it to go on like this.”