Sinister Remake: Blood and POW Humiliation for the Cameras 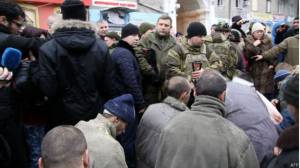 There were too many echoes in the bus shelling and humiliating parade of Ukrainian POWs in Donetsk on Jan 22.  Some were deliberate, such as the “13 passengers killed” which Kremlin-backed militants and Russian media kept shouting.  The number of dead was in fact 8, but 13 ensured associations with the tragedy near Volnovakha a week earlier.  The militants’ remake of their first shameful POW march on Ukraine’s Independence Day, this time staged on Ukrainian Unity Day, was not necessarily meant to hit people squarely in the eye.  The conclusions forced were all too sinister, not only given the death or capture of the ‘cyborgs’ who had so long defended Donetsk Airport from the militants, but also a suggested link between POWs forced to march through Donetsk and ‘apologize’ on their knees, and the scene-of-carnage after a bus was hit by mortar or artillery fire on Thursday morning. All this with Russian TV ready and waiting for ‘a story’ that got maximum coverage in the Russian media.

As on Independence Day back in August last year, around 20 Ukrainian prisoners, most captured at Donetsk Airport and showing obvious signs of having been beaten, were forced to march – as Russian TV Life News related “for educational purposes” to the place where the bus stop was hit.  They were abused and pelted with things along the way,  At the end, the leader of the self-proclaimed ‘Donetsk people’s republic’ Alexander Zakharchenko - looking remarkably spruce, for all the world as though he’d known he was going to be on television, forced the POWs on to their knees “to apologize”.

LifeNews, as usual, leaves nothing to chance and foists the necessary interpretation on its audience who are told:

“The column of prisoners was accompanied by both representatives of the Donetsk people’s republic army and residents of the city suffering from the constant shelling by the Ukrainian armed forces. The citizens could not react calmly to the ‘cyborgs’ and shouted their grievances at them.”

There have been reports in the Ukrainian media that the woman most vocal in haranguing the POWs is something of a ‘regular’, seen on many Russian media reports in altogether different places.  The journalist Christopher Miller, who is currently in Donetsk, appears to confirm such suspicions in a comment on Twitter:

“Observed woman shouting Ukrainian POWs at scene of shelling. As she walked away, rebel grabbed her, pulled her back, insisted keep shouting.”

The media spectacle laid on was by no means to everyone’s liking.  Dunja Mijatovic, OSCE Representative on Freedom of the Media denounced Life News’ “unethical and inadmissible reporting”.  “This is abuse of journalists’ rights and privileges”.

Ms Mijatovic was probably referring only to the fact that the POWs were shown being ill-treated and degraded.  The reporting on Life News (and other Russian channels) was, however, unacceptable for another reason.  It grossly misled the viewers both in what it said and what it chose to leave out.  Among the details it chose to ignore, but which are regularly reported by, among others, the OSCE Monitoring Mission, is the fact that the militants have been shelling the Ukrainian-held airport and Pisky from within the city.  OSCE has acknowledged the difficulty this poses to men whose lives were threatened – many lost – through constant missile fire.

Another omission concerns the main version presented by the militants who from the outset asserted that the blasts were from mortar strikes.

The OSCE’s monitoring mission was more cautious, stating in its spot report that “the weapon(s) used was most likely either a mortar or an artillery piece”.  Whichever that was, the direction was from the northwest.  If artillery fire, then the range is greater, though most media reports, regardless of country, appear to give more credence to the suggestion that this was a mortar strike.  Since the firing range for such strikes is much smaller than the nearest town (Pisky) from where the Ukrainian forces could have been firing, the mortar would have had to be fired from within Donetsk, all of which is under militant control.

The militants have an answer to this:  they claim, as the Guardian correspondent Shaun Walker reports, “it was an attack by a diversionary group from inside the city”.  By evening this had ceased to be just some ‘DNR’ [‘Donetsk people’s republic’] militants in the city, with Zakharchenko himself providing another Russian TV channel NTV with two possible versions.  On the one hand, he asserts that “judging by everything, Ukrainian artillerists for the first time in ages did manage to reach the Leninsky district which is on the far south of Donetsk”.   On the other “he confirmed information about how at the moment in the city there are a large number of diversionary groups called “roaming mortar firers”.  He said that these groups cut out holes in Gazelle vans or even cars used for taking rubbish away.  They swiftly fire then flee from the scene.

The problem once again is with echoes (and the lack of them).  This appears to be the first such claim by DNR leaders who are clearly suggesting that Ukrainians are engaged in such activities.  There are, however, plenty of such reports from Ukrainian military chronicler Dmytro Tymchuk.  Over the last two months his reports, translated by Voices of Ukraine, have repeatedly spoken of such groups of Russians and militants (he uses the term terrorist).  On Jan 8, 2015, for example, he writes that “the activity of at least three manoeuvrable enemy fire groups (that consist of armoured vehicles, including tanks and anti-aircraft guns and mortars mounted on vehicles) has been observed. These manoeuvrable groups periodically launch fire strikes at the positions of Ukrainian troops, and then change their positions.”

Not difficult to achieve in a city under DNR control.  While there are undoubtedly pro-Ukrainian partisans in Donetsk, it is considerably harder to imagine how, in a city teeming with heavily armed militants and Russian fighters, Ukrainian fighters could commandeer rubbish removal vans or the like, bore holes in them and use them for mortar strikes on civilians.

The above comments are not in any way aimed at expressing an opinion as to who is to blame for this latest horrific tragedy.  It is to be hoped that the militants, together with the Russian media, simply perceived an opportunity to gain maximum media coverage and demonstrated their customary lack of scruples.  As performances go, it was not just “unethical and unacceptable”, but also profoundly unconvincing.