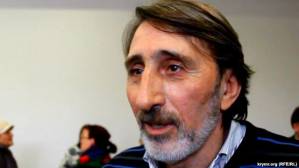 The Crimean authorities under Russian rule have ‘deported’ a Crimean Tatar activist with Ukrainian citizenship, Crimean registration, but with views and a concern over human rights violations that the occupation regime clearly finds inconvenient.  The message this sends any Crimean is chilling.

Under Stalin the entire Crimean Tatar people were deported from their homeland.  Later the Soviet Union deported those like Alexander Solzhenitsyn it could not imprison with impunity, or – like Petro Grigorenko - stripped them of their citizenship while abroad. The latter methods, with little or no pretence of legality, are now being used in Russian-occupied Crimea.

In the early hours of Jan 23 the three coordinators of the Crimean Tatar Rights Committee – Sinaver Kadyrov; Eksender Bariyev and Abmedzhyt Suleymanov – were stopped by Russian border guards at the Armyansk Crossing as they attempted to cross into mainland Ukraine.  They were due to fly to Istanbul from Kherson that afternoon.   Only Bariyev and Suleymanov, both members of the Crimean Tatar Mejlis or representative assembly, were able to make the flight.

All three were held for some time before being summoned one by one to FSB [Russian security service] officers who drew up protocols in which it was claimed that as ‘foreign nationals’, they had infringed the rules for being in Crimea which under Russian occupation is governed by Russian legislation.

All have Ukrainian passports and Crimean registration [‘propiska’] but are being treated as ‘foreign nationals’ because they have not assumed Russian citizenship.

According to Russian law, ‘foreign nationals’ may not stay on Russian territory [including Russian-occupied Crimea] for more than 90 days.  In practice that normally means without crossing the border to get the relevant arrival date in your passport.  Radio Svoboda’s Crimean Service points out that Friday’s detention and then deportation refute the assurances given that people retaining Ukrainian citizenship would not be stopped from living in Crimea.

All three men were, even under Russian law, legally in Crimea, yet only the two members of the Mejlis were finally allowed to proceed.  Sinaver Kadyrov had crossed into mainland Ukraine in November, meaning that he was well within the (Russian) law.

The fact that he was legally in Crimea was ignored first by the FSB, then by the court in Armyansk.  The latter also refused to even consider Kadyrov’s application for the hearing to be postponed as he was travelling to Istanbul for an examination following a heart operation.   A ruling was produced within 20 minutes, without a lawyer being present. The court imposed a two thousand rouble fine for supposedly having committed an ‘administrative offence’ and ordered his ‘administrative removal from the Russian Federation’.

Kadyrov’s wife Emine khanum told QHA that her husband had been given 10 days to pay the fine, but removed from Crimea immediately. Although her husband last left Crimea in November, the FSB and court claimed that the last time he’d crossed the border was Sept. 29.  She says that they have their own mathematics and do what they want regardless of the law.

She promises that they will appeal the deportation, but clearly does not expect a positive outcome.

It is difficult not to share her pessimism.  Three Crimean Tatar rights activists were stopped at the border crossing.  All were within the law, yet two were allowed through and one deported from his native Crimea.

The occupation regime has received deservedly bad press over its overt attempts to crush the Mejlis and 5-year-bans imposed on three people closely associated with it: veteran Crimean Tatar leader Mustafa Dzhemiliev; the head of the Mejlis, Refat Chubarov; and Ismet Yuksel, advisor to the Mejlis.   This is one possible reason why Kadyrov, the only non-member of the Mejlis was targeted.

Or it may be as banal as that one target only was required, and any of the three would do.  Not even a week had passed since participants in a conference organized by the Crimean Tatar Rights Committee sent an appeal to the UN Secretary General over grave violations of Crimean Tatar rights.  The conference went ahead despite major attempts by titushki or government-paid thugs to disrupt it.  There have been other attacks on the members of the Committee, including Kadyrov.  The deportation of all three would certainly have attracted too much adverse publicity.

The deportation from his native Crimea of one Ukrainian citizen and member of the Crimean Tatar national and human rights movement is also profoundly scandalous and warrants the widest attention. Kadyrov is doubtless right in calling this a “test run” and a threatening message about what people can expect if they don’t ‘behave themselves.’

Under Russian occupation, it seems, they can expect persecution, imprisonment or deportation.