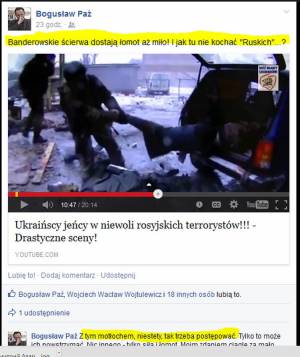 Those concerned that Bogusław Paź only shared the video and his view that more Ukrainians needed to be killed on Facebook should bear in mind that the videos themselves  are considered by human rights activists to be evidence of war crimes.

A Polish philosophy lecturer has been suspended and a report made to the Prosecutor’s office over comments regarding a shocking film in which Kremlin-backed militants are seen abusing Ukrainian POWs.  Those concerned that the approving comments were ‘only’ made on Professor Bogusław Paź’ Facebook page should bear in mind that the videos themselves, also mainly circulated on Youtube and social networks are considered by human rights activists to be evidence of war crimes.

Bogusław Paź from the Faculty of Modern Philosophy at Wrocław University has long been known for his extreme anti-Ukrainian views.  The Dean might well have continued turning a blind eye were it not for a civic initiative called Russian V Column in Poland which monitors the writings and activities of journalists, academics and others who are actively pushing pro-Russian, anti-Ukrainian views and supporting the Kremlin’s proxies fighting in eastern Ukraine.

On Jan 29 damning material published by the initiative was noted by the Polish media and with good cause. Paź had posted on his Facebook page a video clip (see link and explanation below) in which pro-Russian (or Russian) militants are seen beating, tormenting and humiliating Ukrainian captives, with reporters from Russia’s Life News and other channels present.  There are also scenes where militants pull bodies out of their van and fling them on the ground. 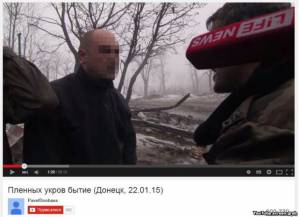 This is one of three videos which Oleksandra Matviychuk, head of the Centre for Civil Liberties and other human rights activists are collecting as proof of war crimes and flagrant violations of the Geneva Conventions.

Paź, unfortunately, had different motives for sharing the video.  His caption at the top reads: “Bandera-supporting scum get it in the neck, what a delight! How can you not love the “Russians”….?”

Underneath he makes the following comment: “With this rabble, unfortunately, that’s how you have to behave. Only that can restrain them. Nothing else – only force and smashing them. In my opinion, there are still too few of these Bandera-supporting dregs in the mud there.  The more of them there are, the greater the chances for normality”.

With this kind of attitude, it is best not to think about what precisely Paź means by ‘normality’.  What is of immense concern is how such a person could be in daily contact with young people, shaping their awareness.   It would be interesting to know how many readers sent letters of concern to the Dean of Wrocław University, Marek Bojarski, although in fact one should have been sufficient.

Fortunately it was and the Russian V Column Initiative proved right – “in any civilized country such publications are professional and public suicide”.

Paź has been suspended, but not silenced.  At present he and his supporters are claiming that he has been defamed, is the victim of a witch hunt, etc.  He makes a great point of the fact that the comments in question were only accessible to ‘friends’.  The concept of friends on Facebook is very loose and the utterances in question could very easily be circulated widely.

Does anybody have the right to circulate such comments and a video containing material in breach of all ethical norms, not to mention international law?   It remains to be seen whether the Polish Prosecutor concludes that Paź should be prosecuted  under Articles 256 and 257 of the Polish Criminal Code (incitement to enmity, or public insults on the basis of race, colour, ethnic origin, etc.).

What is, however, clear is that such utterances, such total contempt for human life and dignity have no place in an academic institution, or elsewhere.  The Polish Rosyjska V kolumna w Polsce is doing an excellent job in highlighting such cases – Ukraine and other countries would do well to follow their example.

NB  There can be no hope of pursuing those guilty of war crimes without making these videos available.  The video here https://youtube.com/watch?v=D-gJ46pVLMo is  EXTREMELY disturbing and a grave crime against the soldiers – both those whose bodies were treated with such disrespect, and those who were abused and threatened. The militants’ aim in posting such material is doubtless to intimidate others and to dehumanize those who were killed defending their country.  Our aim is to expose those guilty of producing such heinous footage or of sharing it and gloating, and most importantly to ensure that the perpetrators answer for grave war crimes. If you do decide to watch it please be aware of the above, and in particular of the need to ensure that children do not see it.