Ukrainian blogger to remain in detention on dubious ‘treason’ charges 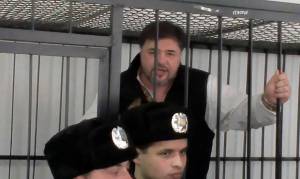 The Ivano-Frankivsk regional court of appeal on Feb 14 upheld a ruling which has provoked serious criticism from human rights organizations, including Amnesty International.  It confirmed the two-month detention order on Ruslan Kotsaba, an Ivano-Frankivsk blogger who is accused of state treason and obstructing the work of the Ukrainian armed forces.

According to the web publication Firtka, Kotsaba’s lawyer had argued that there were no grounds in thinking that his client would leave for the self-proclaimed ‘Donetsk or Luhansk people’s republics’, and that the investigation had been carried out superficially.  An independent assessment should be made, he asserted, of material on various Russian government-controlled media, as well as the Ukrainian TV 112, which the lawyer says do not contain calls which would back the charges against Kotsaba.

As reported, Kotsaba was detained by the SBU [Ukrainian Security Service] on Feb 7.  He is suspected of crimes falling under Article 111 § 1 (state treason) and Article 114-1 § 1 (obstructing the lawful activities of the Armed Forces and other military formations).

The latter assertions are at odds with evidence from Ukraine, Russia, US and NATO satellite images and reports, and much more.   Very many Ukrainians find Kotsaba’s views and the effective help he is providing the Russian propaganda machine morally objectionable.  This does not make him guilty of treason.

One sad irony about this case is that a video against mobilization which had probably been watched by a very small number of people has now been watched by nearly 387 thousand viewers on YouTube.

The arrest has given one blogger with views many find objectionable major publicity and brought the Ukrainian authorities in for considerable criticism.

Amnesty International in Ukraine went so far as to call Kotsaba a prisoner of conscience in a text entitled “Prosecution for a civic position on the conflict in Ukraine is unacceptable”.  This appears to have been a statement issued only by the Ukrainian chapter of AI.

Many Ukrainian human rights activists and journalists, such as Volodymyr Yavorsky, and the Independent Media Union have also criticised the move.

This is also not the only such questionable arrest and detention.  Ukrainian national Andriy Zakharchuk who works in Russia for the St Petersburg news agency Nevskiye Novosti and also the Russian Federal News Agency was arrested on Feb 12 on treason charges.  There is nothing in Ukraine’s Constitution or legislation prohibiting a journalist from working for a foreign news agency and there is no evidence at all of Zakharchuk having engaged in anything that could, in a democratic country, be termed ‘treason’ (more details: Ukraine follows Russia in dubious ‘State treason’ arrests).