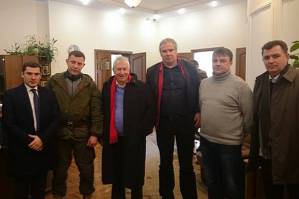 Two deputies from Germany’s Bundestag have illegally crossed the border from Russia into militant-controlled Ukraine, providing the latter with an opportunity for propaganda, and supposedly 6 tonnes of medicines for hospitals in the self-proclaimed ‘Donetsk and Luhansk people’s republics’ [‘DNR’, ‘LNR’].

Wolfgang Gehrcke and Andrej Hunko, both from Germany’s De Linke [The Left] party were presumably funded and / or helped in this enterprise by something called  Zemlyachestvo Donbasa [Fund of the Donbas Fraternity], an NGO with a Moscow address and bank details.  This fund which claims to have been “created to provide humanitarian aid to residents of the South-East of Ukraine” works closely with the ‘Committee for Public Support for the Residents of the South-East of Ukraine’.  The Committee, in turn, is a body under Russia’s upper house of parliament [the Federation Council] and supported by the Federation Council Chairperson, Valentina Matviyenko, Russia’s highest-ranking woman politician known for her absolute loyalty to Russian President Vladimir Putin.

The deputy head of the rather more obscure Donbas Fraternity Fund, Yakov Samushiya called the visit by the two Bundestag deputies “the first humanitarian mission with representatives of the European Union”.

Quite a trophy for the militants and it is not surprising that the event was marked by photographs with militant ‘DNR’ leader Alexander Zakharchenko and ‘health minister’ Viktor Kuchkovoy.

Anton Shekhovtsov has suggested that the German politicians entered Ukraine illegally through a border controlled by militants and the Ukrainian authorities should investigate immediately.

So too should the German authorities.  The members of Germany’s parliament are entitled to their opinion regarding events in Ukraine.  After doubtless having been treated with hospitality from Moscow and its militant proxies, they may well plan “to pass on to our compatriots all that truth which we found during the entire period of our stay in the republic.”

They have however passed illegally through a border which Russia is using to transport military equipment and ammunition as well as soldiers and mercenaries for its undeclared war against Ukraine.

There is ample evidence that the so-called ‘humanitarian convoys’ which Russia itself has been transporting into Ukraine have been bringing weapons, fuel and supplies needed for the military offensive, or for enticing local residents to pseudo-elections condemned by the EU and OSCE.  It is also believed that the trucks are being used to take the bodies of fighters killed back into Russia.

Even before the sharp escalation in fighting left many hospitals devastated, there were constant reports that local residents had no chance of getting hospital care, with only militants treated for free.  Even if the two Bundestag deputies were not deceived and really have brought medicine into Ukraine, it is extremely unlikely that it will be for the benefit of a population which is undoubtedly facing a horrific humanitarian crisis.

Adequate response from Germany and the EU to the destruction and suffering being caused by Russia and its proxies is urgently needed.  Swift clarification of the propaganda stunt pulled by these two Bundestag deputies would also be appropriate.