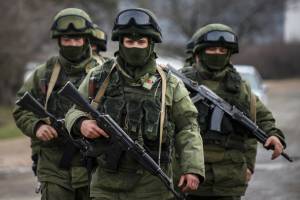 It is exactly one year since Russian forces seized control of government buildings and airports in Crimea and organized the events leading swiftly to Russia’s annexation of Crimea. It was a year that saw murder and disappearances, Soviet-style bans and deportation, as well as persecution of all who oppose Russia’s occupation.

These are just some of the victims of an increasingly lawless and cynical regime.

Reshat Ametov’s mutilated body was found on March 15.  He had been abducted from outside the parliament building in Simferopol by men in camouflage gear on March 3 while holding a one-man silent protest against the invasion.  The Crimean Human Rights Field Mission reports that the murder investigation has been suspended, with no reason given.

There is also no news about the disappearances / abduction of nine people.  Three civic activists known to oppose Russian occupation disappeared last summer.  Three young Crimean Tatar men have not been seen since two men - 19-year-old Islyam Dzheparov and his 23-year-old cousin Dzhevdet Islyamov – were abducted, and 23-year-old Eskender Apselyamov disappeared around the end of September.  Even the registration number of the vehicle in which the two young men were abducted was known yet the authorities were supposedly unable to find them.

These disappearances came shortly after a major offensive was launched against the Crimean Tatars and their representative assembly, the Mejlis, and were widely interpreted as deliberate measures to create an atmosphere of fear and intimidation.

It would probably not be correct to say that Crimean Tatars were deliberately targeted as members of that indigenous people. At the very beginning, there were verbal attempts to gain the support of the Mejlis, and a handful of Crimean Tatars who have opted to collaborate with the opposition regime hold reasonably high posts.

The Mejlis, and Crimean Tatars in general, were strongly against Russian occupation and have faced mounting repression.  This has been reported in detail here, so please see the hyperlinks for more information.

Veteran Crimean Tatar leader Mustafa Dzhemiliev was the first to be banned in April 2014 from his native Crimea (and Russia.).  The ban was upheld by a Moscow court in Feb 2015, after a migration service official asserted that the 71-year-old former Soviet political prisoner and Ukrainian MP had been banned for 5 years “to ensure the state’s defence capacity and security, and to safeguard public order.” Similar bans have now been imposed on Refat Chubarov, Head of the Mejlis and Ismet Yuksel, director of the QHA News Agency and adviser to the Mejlis.

One Crimean Tatar rights activist – Sinaver Kadyrov – was ‘deported’ from his native Crimea in January 2015.

A full (and armed) offensive against the Mejlis was launched in September just days after pseudo elections in Crimea which the Mejlis had called on Crimean Tatars and all concerned about the mounting repression against them to boycott.

There have been truly Soviet attempts over the last month to create a puppet Mejlis and Qurultay national congress by organizing and rigging fake elections to these bodies in order to install the regime’s people.

5 Crimean Tatars are now facing absurd charges, laid over 6 months after the peaceful protests on May 3 when thousands of Crimean Tatars met Mustafa Dzhemiliev at the Armyansk border crossing between mainland Ukraine and Crimea the day after Russia first imposed its ban on him.   There are all grounds for seeing this as a Crimean version of the Bolotnaya Square trials in Moscow against opponents of Vladimir Putin’s presidency. It is significant that the family of Edem Osmanov, the fifth person arrested, has also been subjected to searches and other repressive measures.  This is almost certainly linked with Edem’s father Mustafa Osmanov’s active support – and provision of hot pilaf! – for the EuroMaidan protesters in Kyiv.

The supposed investigation into the events on May 3 has been used as an excuse for numerous armed searches of Crimean Tatar homes over the last 8 months, as well as some truly grotesque excesses like the summoning for questioning of 80-year-old veteran of the Crimean Tatar national movement Vedzhie Kashka.

Armed searches have also been carried out of mosques and religious schools in a mounting witch hunt for supposed ‘extremists’.  Abuse of Russia’s excessively broad anti-extremism legislation has been used from the outset as a major weapon, particularly against Crimean Tatars, and this unfortunately is likely to escalate following a recent action plan adopted.

Having banished the Head of the Mejlis, the occupation regime has arrested the Deputy Head Akhmet Chyyhoz on surreal charges.  He and (thus far) one other Crimean Tatar are accused, under Russian law, of organizing a mass demonstration which took place under Ukrainian legislation and Ukrainian rule on Feb 26, 2014.  Planned peaceful protests against his arrest have been banned.

It would be difficult to imagine greater cynicism, although the arrest and detention of Alexander Kostenko is certainly competing.  In Jan 2015, this 28-year-old EuroMaidan activist was remanded in custody by a Crimean court on charges linked with the EuroMaidan protests in Kyiv last February before Russia’s invasion of Crimea.  His is the first such arrest, but judging by the Russian-installed ‘prosecutor’s’ website, unlikely to be the last.

Crimean film director Oleg Sentsov, civic activist Oleksander Kolchenko and two other opponents of Russian occupation were arrested last May and accused of a ‘Right Sector terrorist plot’.  The only ‘evidence’ in this highly questionable case comes from one of the defendants Gennady Afanasyev who ‘confessed’ while under police control without access to lawyers and who appears to have made a deal with the prosecution.  He was recently sentenced to 7 years in a closed trial which the other defendants’ lawyers knew nothing about.  Since his testimony could be used to sentence Sentsov, Oleksandr Kolchenko and Oleksy Chirny to 20 years imprisonment, it was clearly crucial that the defence had the opportunity to be at Afanasyev’s trial and cross-examine him.  More details here: Russian secret trial to convict opponents of Crimean annexation.

The list of victims can be extended.  All faiths except the Orthodox Church under the Moscow Patriarchate have faced repression, and many, from March 1, may be stopped from functioning in Crimea.  Independent and / or Ukrainian media have been axed, and civil liberties, such as the right to peaceful assembly, have been seriously curtailed.

One of the banners protesting against annexation back in the Spring of 2014 called on Crimeans to understand that “under Putin you won’t SPEAK in Russian, you will be SILENT in Russian.

Or in prison, exiled or disappeared.