“We don’t need a second Yanukovych!”Forget judicial overhaul: for court presidents it’s business as usualCrucial law on judicial overhaul passedMaidan activists stop questionable congress of judgesCreating a trustworthy judiciaryJudicial reform by most other namesUkraine: When Reform Isn’tConstitutional Court headed by judge closely linked to YanukovychConstitution to OrderOPORA expresses concern over Constitutional Court’s postponement of Kyiv electionsConsitutional Court once again obligesDodgy „parliament”, dodgy lawsAn Anti-Corruption Programme for the recordThey’re stalling anti-corruption reforms in UkraineNothing to say about Ukraine’s National Anti-Corruption CommitteeUkraine continues its slide in corruption ratingsYet another threat to public procurement procedureNo funding for anti-corruption measures – or any sign of themUkraine has worst corruption rate in EuropeEuropean Commission concerned by new law on public procurement
• Topics / The right to a fair trial 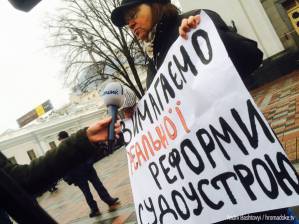 A new law on judicial reform just signed into force has been praised for significant improvements over the disastrous law of July 2010, but slammed for retaining the options for political pressure on the courts and judges which enabled ex-President Viktor Yanukovych to usurp power.

Political pressure on Ukraine’s judiciary is unfortunately nothing new.  In October 2008, for example, President Viktor Yushchenko’s attempt to dissolve parliament was thwarted by Judge Volodymyr Keleberda from the District Administrative Court in Kyiv who suspended the decree.  Response to this politically coloured and legally questionable act was swift.  Within a week or so, Yushchenko had dismissed Keleberda by revoking an 18-month-old decree appointing him to office, and had dissolved the court itself.

This was – aggrieved - child’s play in comparison to the hatchet job on the judiciary carried out by Viktor Yanukovych within months of his assumption of the presidency in Feb 2010.   The laws introduced from May to July 2010 seriously eroded judges’ already fragile independence.

By the beginning of EuroMaidan in 2013, the courts had reached a dangerous level of degradation.  Judges in Kyiv  the courts had obligingly sentenced Yulia Tymoshenko and other former high-ranking government officials from the opposition to terms of imprisonment on politically motivated charges.  A large number of judges had been transferred from Yanukovych’s native Donbas to Kyiv and top posts were held by people close to him or his family.  Disciplinary bodies – the High Council of Justice and High Qualification Commission of Judges – were under the control of those wielding political power and there were numerous cases where judges had faced disciplinary measures or dismissals for issuing rulings which the prosecutor did not agree with.  This was one of the main reasons for the disastrously low level of acquittals which fell to 0.2% in 2012.

It was thus no accident that ‘lustration’ of judges implicated in politically motivated rulings, as well as general judicial reform, were seen as priority tasks following the change in government.

The Law on Ensuring the Right to a Fair Trial , signed by President Petro Poroshenko on Feb 15 has received some praise from the reform initiative Reanimation Package of Reforms [RPR] and individual members of the initiative.

They are approving, for example, of the system of competitive selection of judges for all posts and regular assessment by civic organizations and others carrying out monitoring of court cases.  Direct appeal is permitted to the Supreme Court against higher court rulings and the system of judges’ self-government much simplified.  The law also stipulates that anybody can video or tape court hearings without getting special permission from the court and that all rulings, and even dissenting opinions should be added to the Register of Court Rulings.

RPR, however is strongly critical of other aspects of the law and says that it “retains dependence of each step in the development of a judge’s career on political bodies”.  This is despite the fact that the parliamentary coalition clearly stated their commitment to remove such influence.

The dangerous provisions include:

Retention of presidential powers not foreseen by the Constitution:  the President can dissolve courts; take judges’ oath; sign their certificates; and move a judge from one court to another. The parliamentary committee is also given powers not set out in the Constitution is they can consider questions regarding transfer of judges, as well as the issue of whether a judge receives indefinite tenure.

Inclusion of new presidential powers, with him authorized to sign the documents for the presidents of courts and their deputies, although the President has no role in their election.

RPR also notes that the law does not stipulate the grounds for refusing to grant indefinite tenure or transfer and contains very loose formulations which can be applied too broadly for breach of oath. All of this, the reform initiative warns, can lead to judges being kept in line and pressured into showing political loyalty.

Given the scope for developments that undermine judicial independence, RPR says that it will be following implementation of the new law very carefully. It will also be lobbying bills aimed at encouraging MPs to carry out their commitments with regard to judicial reform as part of the coalition agreement.

As reported earlier, there was concern earlier after two bills tabled in parliament, one drawn up with the help of RPR experts, both ostensibly offered judicial reform but in ways that seemed irreconcilable.  RPR and other analysts asserted that the bill proposed by the President’s Administration would give Ukraine’s president even more power than Yanukovych had.

The Verkhovna Rada possibly heeded the protests by passing both bills – the RPR-supported  Bill No. 1497 and the President’s Draft law No.1656 -  as a base, with the idea being that the two bills would be merged into one, taking the positive aspects of each.

It is disturbing that the negative features are precisely those ones giving the President and authorities undue influence over the judiciary.