It is exactly a year since Crimean Tatar Reshat Ametov, 39-year-old father of three young children, was abducted by pro-Russian paramilitaries.  His badly mutilated body was found almost two weeks later. Despite video footage showing his abduction from outside the parliament buildings in Simferopol where he was holding a lone protest against Russian occupation, no arrests have been made.  It now appears, in fact, that the ‘investigation’ – if such there ever was – has been terminated.

Ametov’s wife, Zarina says that her husband left early in the morning of March 3, apparently for the military recruitment office where he was planning to volunteer for the Ukrainian Army  He was last seen, however, standing in solitary protest outside the parliament building in Simferopol that afternoon.  TV ATR video footage shows him standing alone, without a placard, outside the government building for around an hour and a half.  Witnesses say that he was then taken away by three men from the so-called ‘self-defence’ paramilitaries, two in military gear.  They can be seen in the video here holding him and then forcing him into a car. 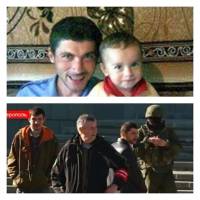 Ametov’s body was found on March 15 with signs of torture.  There were handcuffs near his body and tape over his head.

Sergei Aksyonov who claimed to have been elected prime minister at a ‘parliamentary session’ called by the Russian soldiers with Kalashnikovs who seized control on Feb 27 has consistently denied that the paramilitaries had anything to do with Ametov’s abduction and murder.

His arguments are eerily like those of pro-Kremlin officials and media in talking about last Friday’s gunning down of Boris Nemtsov, the opposition leader and critic of Russian President Vladimir Putin.  In both cases the claim is that you look for those who had something to gain, and that is – supposedly - not the paramilitaries in Ametov’s case, or the Kremlin in Nemtsov’s.

Probably because of the outcry beyond Crimea over Ametov’s murder, the Crimean Investigative Committee (part of the Russian body) initiated a murder investigation in April.  However relatives have told Radio Svoboda’s Crimean Service that the investigators on the case kept changing, and they in general do not expect anybody to be brought to justice.

Refat Ametov, Reshat’s brother is convinced that the Russian police know who carried out the abduction but have not arrested or charged there.  He himself has not been given victim status in the case.

If there is a case.  As reported here, in their report for January 2015, the Crimean Human Rights Field Mission reports that the murder investigation has been suspended, with no reason given.

No justice, and the killings, disappearances and repression continue  (more details here)