Ukrainian Flag on Shevchenko Anniversary is now ‘extremist’ in Crimea? 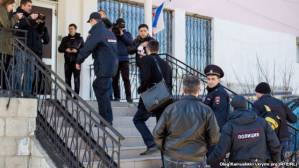 It couldn’t have been more Soviet.  The organizer and two participants of a meeting in Simferopol to mark the 201st anniversary of Ukrainian poet Taras Shevchenko were detained by Russian police and taken to a local police station.

Radio Svoboda’s Crimean Service reports that the gathering took place in Gagarin Park in Simferopol and was attended by around 50 people.  They read Shevchenko’s poems, and also chanted “Glory to Ukraine! Glory to the Heroes!” [the chant which, whatever its antecedents, has become widespread since EuroMaidan].  One Crimean Tatar flag was unfurled, and two Ukrainian flags, one with the words: “Crimea is Ukraine”.

The police did not interrupt the entirely peaceful meeting, but as people were leaving, took the organizer – Leonid Kuzmin and two participants to the police station.  They said that this was because of the Ukrainian symbols used at the gathering.

Around 15 members of the remembrance gathering followed the police car and are currently outside the police station.

The organizers had wanted to hold the gathering near the monument to Taras Shevchenko, but the authorities refused permission, agreeing only to the meeting taking place in Gagarin Park.

What was meant by ‘Ukrainian symbols’ is not quite clear.  The police may have been referring to ribbons in blue and yellow (the colours of the Ukrainian flag) and the flag itself.  It seems likely, however, that the words ‘Crimea is Ukraine’ provoked the excessive reaction from the police.

Since May 2015 ‘calls to separatism’ have become a criminal offence in Russia (and Russian-occupied Crimea), with this effectively including questioning Russia’s annexation of the Crimea.   According to Dmitry Makarov from the Crimean Human Rights Field Mission, it remains unclear whether writing on Facebook that Crimea is Ukrainian could be deemed to fall within the scope of the law.  A placard in a park is even more public, but can hardly be called a public call to overturn the regime.  The law is, however, an ominously clear signal that it is dangerous to question Russia’s annexation of Crimea and the latter’s status.  It is probably only a question of time before the Russian authorities organize a demonstrative prosecution to prove this.

A year after Russia annexed Crimea, there is a particular poignancy to this new demonstration of intolerance for freedom of expression and gathering.  During the later Soviet years monuments to Taras Shevchenko were a traditional place in Ukraine for unsanctioned demonstrations, especially on March 9 (marking his birth on March 9, 1814), his death in Russian exile on March 10, 1861, and on May 22, marking the anniversary of the day in 1861 when Taras Shevchenko’s ashes were brought from St. Petersburg and carried by students up a steep hill in Kaniv in accordance with the poet’s ‘Zapovit’ [Testament].

Ukrainians were regularly detained then as well.