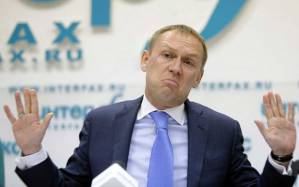 Russian President Vladimir Putin has honoured Andrei Lugovoi, the man whom Britain wants to try for the 2006 murder of Alexander Litvinenko.  If this is a message, it is a scary one.  The award is bestowed at a time when the Litvinenko Inquiry is underway in London, with new details emerging every day about the degree of evidence against Lugovoi, including the trail of radioactive polonium he is believed to have left.   Putin’s award is to Lugovoi, described only as the deputy head of the State Duma Committee on Security and Countering Corruption.  It is, however, “for courage and daring demonstrated in carrying out work duties in conditions linked with risk to life”.

Lugovoi’s current duties as State Duma deputy can hardly fall under such a description.  Lugovoi’s career was first in the KGB, from where he moved on to Russia’s FSB.  He officially left the FSB in 1996 and in 2006, when former FSB agent and vocal Kremlin critic, Alexander Litvinenko was murdered, Lugovoi owned his own security firm.

Scotland Yard announced early into their investigation that they wanted to question Lugovoi after Litvinenko was discovered to have died of polonium poisoning.  Britain’s request for his extradition was rejected, and in September 2007, Lugovoi became an MP in Vladimir Zhirinovsky’s LDPR Party.

It is unfortunately also significant that the Litvinenko Inquiry is only taking place now.  Despite the enormous weight of evidence against Lugovoi and Russia’s unwillingness to cooperate with the British investigators, Britain long avoided the damaging effect, particularly to its economic interests, of giving the case too much publicity.

The Guardian’s Luke Harding, who has been following the Inquiry, writes that Andrei Lugovoi and Dmitry Kovtun met Litvinenko on Nov 1, 2006 and allegedly put polonium in his tea during their meeting at the Millennium Hotel. CCTV footage from hotel cameras caught Lugovoi and Kovtun visiting the gents’ toilets just before the meeting.  “Tests later revealed extraordinary quantities of radiation coming from one cubicle. Super-high readings were also found on and immediately beneath the bathroom hand-dryer. The two killers, it appears, were mixing or preparing the poison behind a heavy oak cubicle door”.

Lugovoi claimed that he got to the hotel later, however this can be checked against the CCTV cameras, and he was not telling the truth.

Scotland Yard followed the trail of radioactive polonium 210 left in all the places the two men visited, with Harding writing that “the case against Lugovoi and Kovtun looks unassailable”.

In the light of Putin’s award, it is worth noting that the police report that the “highest readings of the entire investigation” came from Room 848 of the Sheraton Park Lane hotel where Lugovoi stayed on the second of three trips to London on Oct 26, 2006.  The police believe that during this trip he made a first, unsuccessful, attempt to murder Litvinenko, and then returned a week later.  Harding reports that the “two scientists who examined it had to be “stood down” because the room was so dangerous.”

Litvinenko is best known for the investigation he carried out and resulting book about the 1999 apartment bombings in Moscow and Volgodonsk which he claimed were organized by Putin with the help of the FSB.

It has generally been acknowledged in this case that the use of polonium 210 made it next to impossible that the murderer could have obtained the poison through private channels.  The degree to which the trail appears to lead directly to the FSB and those giving it orders was almost certainly the reason why there was near silence over the case for some years.

The inquiry is now underway and its findings are damning.  The fact that Putin has now decided to honour Lugovoi for “carrying out work duties in conditions linked with risk to life” seems no less so.