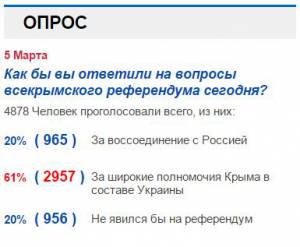 If the survey that appeared on the pro-Russian Krymskaya Pravda website was real, then were a referendum to now be held on the status of Crimea,  61% of the respondents would vote for greater autonomy within Ukraine, and only 19% would vote to join Russia.  It is a big ‘if’, with Krymskaya Pravda now claiming that the survey was the “latest provocation by enemies of Crimea”.

Since Krymskaya Pravda was notorious for its pro-Russian position and hate speech against Crimean Tatars long before Russia’s invasion, it is possible that they are telling the truth, however novel this may be for the particular publication.  On the other hand, there are important discrepancies in their version.  They claim that false results were posted immediately prior to the website being subjected to a DDoS attack (when the server is brought down through multiple requests), meaning that it could not be accessed.  In fact the answers above, and results of two previous, equally interesting, questions, had already been seen early and widely reposted on social networks from Sunday evening onwards.  The figures above are reported by Radio Svoboda’s Crimean Service as being from 8.00 on March 9, after  4, 510 people had responded.  At 12.40, Radio Svoboda reports, the site went down.

Krymskaya Pravda’s Chief Editor Mikhail Bakharev is reported as claiming that the results of the survey via email and a hot line showed “the contrary”.  Instead of elaborating, however, the publication “took the decision to cancel the results of the Internet service and asks colleagues to not quote it and not play into the hands of provocateurs.”

Surely giving the actual results, and providing screen shots of the voting before the alleged hacking would have been a much more effective remedy against ‘provocateurs’?

If the results were real, then they are damning.  As well as the question reported above, there were two earlier ones, with the voting closed, precluding influence from outside, or post-factum. 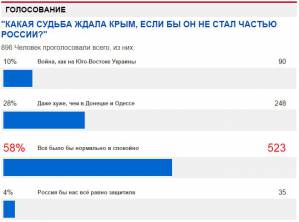 896 people answered the question: “What fate would have awaited Crimea if it had not become part of Russia?”

These results were visible for at least 12 hours before the site went down. Considering that Ukrainian media were removed as soon as the Russian-installed government took over, and the Russian media strongly pushes Russian President Vladimir Putin’s narrative about Russia intervening to save Crimea from a bloodbath, the percentage who believe all would have been well is telling. 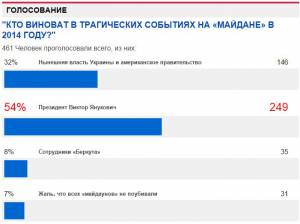 461 people answered an earlier question about who was responsible for “the tragic events on Maidan in 2014”.  32% (146) blamed the current Ukrainian government and the US government; 54% (249) blamed the then President Viktor Yanukovych;  8% (35) said that Berkut special unit officers were to blame; and 7% (31) said that it was a shame that all Maidan activists (an insulting term is used in the actual question) were not killed.

Since Russia’s invasion and annexation of Crimea, freedom of speech and assembly have been gravely curtailed.  It has also become dangerous to express pro-Ukrainian views.  These have led to abductions and disappearances, and at least one, but likely more, killings. Four opponents of Russian annexation, including renowned Ukrainian film director Oleg Sentsov were arrested and are now in custody in Moscow, facing possible 20-year sentences on fabricated charges.  Repressive measures against Crimean Tatars have become extremely frequent.  It is also quite simply against the law now in Russian and Russian-occupied Crimea to suggest that Russia’s annexation should end.

Under such circumstances, it is next to impossible to accurately assess public opinion regarding annexation and Crimea’s status.

In a report just published entitled Human Rights Abuses in Russian-Occupied Crimea,  Andriy Klymenko points out that residents of Crimea had “actually grown more “Ukrainian” in their outlook in recent years. According to a 2011 survey by the Razumkov Center, an independent policy institute in Kyiv, 71.3 percent of respondents said they considered Ukraine their homeland—up from 39.3 percent in a 2008 poll”.

Even Russia’s own Human Rights Council last year acknowledged that the official results of the March 16 so-called ‘referendum’ were incorrect.  It found that while the overwhelming majority of residents of Sevastopol had voted to join Russia (with a turnout of 50-80%), the turnout for all of Crimea had only been 30-50% (against the 83.1% claimed) and only 50-60% of those voted for joining Russia (against the alleged 96.77%).  That is an especially low figure given that the Crimean Tatars, and many Ukrainians boycotted an event that was internationally condemned and bore no resemblance to a proper referendum.  As reported, Russia invited members of European far-right and Stalinist parties to ‘observe’ the event, with their praise registered virtually before the so-called ‘vote’ had taken place.

The above-mentioned Krymskaya Pravda ‘survey’, even if not sabotaged, could not claim to be representative since it was based on people choosing to take part.

A ‘survey’ of no greater validity has unfortunately been widely used since late January to claim, as Leonid Bershidsky wrote, that “One year later, Crimeans prefer Russia”.

The startling thing is that Bershidsky himself graphically explains the likely reasons to doubt the results of a telephone survey of 800 people made “in today’s Crimea, which is rife with Russian FSB secret police agents and ruled by a local government intent on keeping dissent to a minimum”, yet still claims that “it was the most representative independent poll taken on the peninsula since its annexation”.

He reports that “eighty-two percent of those polled said they fully supported Crimea’s inclusion in Russia, and another 11 percent expressed partial support. Only 4 percent spoke out against it.”

His article continues describing how he thinks Crimeans view things despite a clear understanding that people would almost certainly have been nervous to express negative views to a stranger on the telephone.  It became an act of civic courage in Crimea to speak Ukrainian or to walk down the street holding a Ukrainian flag.  The first killing was of Crimean Tatar Reshat Ametov who was abducted and murdered by so-called self-defence paramilitaries while expressing silent protest outside parliament.  Since then Crimean Tatars have paid with being banned from their homeland, ‘deported’, abducted, arrested or generally harassed for their opposition to Russian rule.

Since that answer may well be influenced by report after report of Crimeans facing arrest, harassment, physical violence or effective banishment from their homeland, it should be those which determine action from both Ukraine and the international community, rather than questionable ‘surveys’.