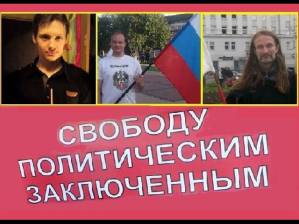 Dmitry Fonarev, Oleg Savvin, Mikhail Feldman The trial has begun in Kaliningrad of three men held in detention since last March for placing a German flag on the garage of the FSB building in Kaliningrad as a form of peaceful protest over Russia’s occupation and annexation of Crimea.  Despite quite bizarre charges, they face up to 7 year sentences.

On March 11, 2014, Mikhail Feldman and Oleg Savvin from a local group called the Public Defence Committee, and a friend  from Moscow Dmitry Fonarev placed a German flag in a glass on the roof of the garage of the regional office of the Russian Federal Security Service [FSB].  As reported, Feldman explained that they were simply pointing to the double standards whereby Russia officially approves of Russian flags being flown in another sovereign state, yet if a foreign flag is raised over Russian territory, this is seen as a crime.

Their act was certainly treated as a crime.  The flag was immediately removed and the three received 10-15 day prison sentences for petty hooliganism.  The prosecution, however, decided that this was not enough and initiated criminal proceedings under Article 213 § 2 of the Criminal Code (group conspiracy to commit hooliganism motivated by political hatred and enmity or hatred to a particular social group).

OVDinfo reports that the ‘indictment’ in this extraordinary case was read out at the preliminary court hearing on March 16.  Feldman and Savvin stated that they do not understand the point of the charge laid against them and don’t agree with it.  According to well-known Moscow lawyer Dmitry Dindze who is representing Feldman, Fonarev accepted partial guilt without giving any details.

The investigators initially claimed that the activists had raised the flag “as a symbol of Kaliningrad’s secession from Russia”, but later changed this to “insulting veterans of the Great Patriotic War” (WWII).  Maria Bontsler, who is representing Savvin and Fonarev, says that they do not have any war veterans in the case.  The only person with ‘victim’ status is the head of a Kaliningrad veterans’ organization who was born in 1949.  Dindze adds that the investigators are also claiming ‘hatred towards representatives of the authorities’.

The investigators also asserted at the outset that Feldman had shouted the Nazi  “Sieg Heil!” when the flag was being raised.  Dindze notes that after realizing that Feldman was Jewish, they clearly decided that this was stretching things too much and, as Dindze puts it, “gave the ‘Sieg Heil!’ to Fonarev.

In fact the charge against Fonarev may also have been because he once held far-right political views. There do not appear to be any independent witnesses with most of the 30 ‘witnesses’ FSB or police officers, but the investigators could still have tried for a bit more credibility.  Considering that the charge involves hooliganism as part of a conspiracy, this would mean that the other two, one of whom is Jewish, found no problem with a Nazi greeting.

The three men first built their own ladder, with all this being photographed and reported on by the FSB staff.

Feldman is also charged with possession of a small piece of the explosive hexogen (without any case, etc.).  He asserts that this was planted on him, and certainly the investigators’ claim that he kept it at home is not very plausible since no trace of it was found in his flat.  Nor have they explained why he would have taken the explosive substance to the flag raising in any case.

Fonarev acknowledges that he raised the flag, but the investigators are accusing all three men of this.  Feldman suffered from cerebral palsy as a child, and could not physically have carried out the ‘impugned offence’, however the investigators have concentrated on him because he was very active in the Public Self-Defence Committee.

The prosecution is due to be questioned at the next hearing on March 24.  Amnesty International has issued an urgent action over the detention of the three men, asking for their immediate and unconditional release and “expressing concern that Mikhail Feldman, Oleg Savvin and Dmitry Fonarev have been detained solely for peacefully exercising their right to freedom of expression”.

These three are not the only Russian nationals held in detention and facing long sentences over peaceful protest.  Russia has also responded with politically motivated arrests and detention against, for example, Kuban activists who tried to hold a peaceful demonstration in favour of greater autonomy.  This is in stark contrast to the Kremlin’s extremely active support for so-called ‘separatists’ in Donbas and other parts of Ukraine.

In the case of the three men in Kaliningrad, there were no secessionist sentiments nor even any demand for greater autonomy, with the protest effectively against Russia’s hypocrisy in annexing Crimea.

In that context, the charges of ‘insulting war veterans’ are offensively inappropriate. For very many Ukrainians who fought in the Soviet Army against the Nazi aggressor, it is not the three young men who insult the memory of their struggle and sacrifice. It is rather Moscow under Russian President Vladimir Putin which used the same arguments once presented by Adolf Hitler in trying to justify Russia’s aggression and annexation of Ukraine’s Crimea.