A Welcome First: Ukraine’s first university student with Down Syndrome 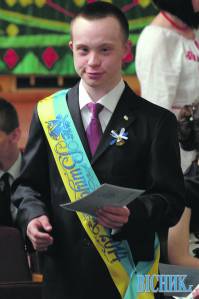 19-year-old Bohdan Kravchuk from Lutsk in Western Ukraine is a first year student in the history faculty of the Lesya Ukrainka East European National University.

Bohdan’s mother, Yevhenia Kinakh had long wanted a child and there was absolutely no question that she would not keep her baby who was born with Down Syndrome.  Bohdan’s name is in memory of Hetman Bohdan Khmelnytsky and was chosen by his grandfather, Vasyl Kravchuk, a well-known Ukrainian urologist. It was he who sparked Bohdan’s love of history.  Instead of fairy tales, he was brought up on true stories about the Cossacks, about Holodomor or the manmade Famine of 1932-1933.

When Bohdan was just over a year, Olena Hrechanina, a member of the Academy of Sciences from Kharkiv who has worked for decades with children with Down Syndrome examined Bohdan and concluded that not all cells were affected, and that if they worked with him, it would have a positive impact. “He’ll learn to speak later than he learns to read.”  At the time, Bohdan’s mother just laughed, yet that proved to be exactly the case.  “At 4 my son already knew all the world capital cities though he still can’t tie his shoelaces.”

His secondary education was in a rehabilitation educational centre.  He had great problems with the exact sciences, but he could talk about history for hours.  When Yevhenia Mykolyivna suggested that he take the external matriculation exam, she never expected him to pass it.  He chose the history faculty and needed help, but did get through.

This was not the end of the difficulties, with the relevant authorities refusing to issue the document confirming his work capability without which he wouldn’t be accepted in a university.

Thankfully, his former tutor, who is now a journalist, Olesya Bondaruk got involved and forced the doctors to review all the normative documentation and find the Cabinet of Ministers resolution which confirms that young people with Down Syndrome have the right to get a higher education.  Bohdan’s mother says that if it hadn’t been for Olesya, she would have given up.

Bohdan is studying as an external student and his mother says that his fellow students and the lecturers are absolutely fine in their attitude to her son. Of course, he’s not about to be a star pupil, but he’s getting quite good results.