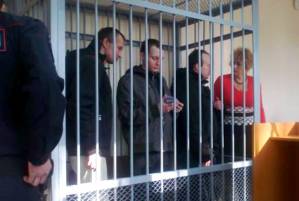 While 3 Russian nationals, facing 7-year-sentences for raising a flag, are charged with having offended veterans of the Second World War, Moscow is taking measures to ensure that elderly veterans who helped win that War will not be allowed near the parade on Red Square marking the seventieth anniversary of Victory Day.

The second hearing took place on March 24 in the trial of three men who have been in custody since last March after they placed a German flag on the garage of the FSB building in peaceful protest at Russia’s occupation of Crimea.  As reported. Mikhail Feldman, Oleg Savvin and a friend from Moscow Dmitry Fonarev were trying to point out Russia’s double standards in allowing Russian flags to be flown over a part of Ukraine, while treating the raising of a foreign flag over Russian territory as a crime.

According to the indictment, the men are accused of a “flagrant infringement of public order, demonstrating overt disrespect for society out of motives of political hatred and enmity and hatred for a social group”. They allegedly “insulted and denigrated the feelings and political orientation of Russian citizens, the feelings of veterans of the Great Patriotic War and the memory of those killed in the Great Patriotic War”.

The court questioned Fonarev who stated that he has an unquestionably positive attitude to veterans and considers them to be heroes.  He rejected all parts of the charges, saying that he was not in any radical organization, did not stir up hatred, had not committed any hooligan acts, and had not planned to insult anyone.

Dmitry Dinze, Feldman’s lawyer, pointed out that the prosecution did not present any expert assessments, and that it remains quite unclear what any of the three are accused of.  Feldman and Savvin are due to be questioned on March 30 and 31.  More details about the case here.

The trial of three young men peacefully expressing their views about Russia’s effective invasion of Crimea is taking place as the seventieth anniversary of the war against Nazi Germany approaches.  It was learned last week that only one veteran from each region, aside from Moscow, has been invited to take part in the events on Victory Day (May 9).

Should other elderly veterans who once defended the country think to arrive in Moscow uninvited,  they will be met at railway stations and sent, free of charge, to the Clinic for Respiratory Rehabilitation in Zvenigorod (Moscow region).

The city government has already received a fair number of letters from veterans asking for help to get to the parade.  They are, however, “outside the quota which each region receives”, and will not be permitted to attend.  There will be around 5 thousand guests altogether at the parade, but since only 400 invitations to veterans were issued last year, most of those present will not be veterans.  Nor will they will be foreign leaders, most of whom have decided not to attend the event in view of Russia’s aggression against Ukraine.

Kommersant was told by a spokesperson from one veterans’ association that most veterans do not even try to go to Moscow due to their advanced age and state of health.  Most, if not all, are 88 or older and the travelling would be exhausting, however it is very clear that many wish to be present and are being told that their presence is unwelcome.

This is in stark contrast to the ceremony marking the seventieth anniversary of the liberation of Auschwitz-Birkenau on January 27, 2015.   There it was the survivors who were heard, not politicians.  Around 300 former prisoners of the Nazi death camps outside Oświęcim in Poland attended and the entire occasion was focused on them.

It is likely that Russian President Vladimir Putin did not in any case wish to attend another event where he faced being snubbed by other European leaders.  However Moscow tried to push the line that “Putin had not been invited”, with many observers in other countries reacting angrily to the alleged ‘slight’.  There was none.  No politicians received named invitations with countries simply informed of the planned ceremony and asked who would be attending.  Political motivation cannot be denied, but it was of a very specific nature. The decision to avoid any political speeches was made by the directorate of the Auschwitz-Birkenau Museum in full agreement with the International Oświęcim Council shortly after the Malaysian airliner MH17 was downed by Kremlin-backed militants on July 17, 2014.  With Russia waging undeclared war on both the battlefield and the propaganda front, the need to prevent the anniversary being used for political ends was paramount.  This was a day when politicians should keep silent.

With the ceremony remembering the liberation of Auschwitz-Birkenau, the members of the Council were aware that this was likely to be the last round-date anniversary at which most of the survivors would be present.

The same applies to the Victory Day parade in Moscow.

The three men in Kaliningrad who raised a German flag did so in peaceful protest.  The charges that they insulted the memory of those who died and those who returned home after defending their country are absurd.  They seem monstrously cynical at a time when those who fought and risked their lives are treated with such profound disrespect.