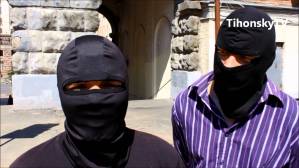 7-year sentence for 19-year-old ringleader of a group of supposed ‘paedophile’ persecutors who inflicted fatal injuries on one of their victims.  The vigilante group was analogous to the notorious “Okkupai-pedofilyai” gangs first organized by Russian neo-Nazi former skinhead Maxim Martsinkevich [‘Tesak’, or ‘Hatchet’] and spread in Ukraine.

On March 24, a court in Odessa sentenced the 19-year-old ringleader of Fashionable Sentence whose members, at his initiative, sought out people on acquaintance sites showing interest in underage girls. They asked a girl they knew to arrange a meeting with one man on Oct 22, 2014.  Instead of the expected date, the man was met by around 10 members of this gang.  They surrounded the man, forcing him to admit to being a paedophile and also forced him to carry out various humiliating acts.  The convicted man punched him in the chest with his fist in trying to force him to his knees, and then inflicted several blows to the head and face.  They then just left him.  He was taken to hospital but died four days later of his injuries.

It was, unfortunately, long clear how dangerous this supposed vigilante behaviour was, as were the grounds for concern over the failure of the authorities to react.  As reported, Russian Martsinkevych turned to hunting down those he called ‘paedophiles’ after a highly chequered career as a skinhead leader.  His first gang was responsible for some harrowing video clips including an “execution” in a Moscow region forest which may well have been based on the real killing of a migrant worker. Martsinkevich emerged after three years in a Russian prison for incitement to racially-motivated violence with his neo-Nazi ideology intact, but with a change in target.  His new organization “Okkupai-pedofilyai” was basically the prototype for the above-mentioned vigilante tactics in Odessa, although it was especially notorious for setting up and then ‘re-educating’ (with fists or worse) gay victims.  In 2013 the Gay Star News reported that a gay teenager in Russia had died after being kidnapped and tormented by Martsinkevich’s vigilantes.

By 2013 there were signs that the Russian enforcement bodies were finally beginning to crack down on “Okkupai-pedofilyai” at home*, but by then Martsinkevich and his people had spread out to Ukraine.  For around 2 years the police did nothing while similar groups emerged in Odessa; Mykolaiv; and the Crimean cities of Kerch and Yalta.

It was a major achievement in July 2013 when the Mykolaiv Head of Police, Oleh Shevchuk condemned the “lawless excesses” which the vigilantes get up and advised anybody considering such activities to instead contact the police on identifying a suspected “paedophile”.   In other cities, including Odessa, the police turned a blind eye to behaviour which involved using young people – boys or girls - as “bait” enticing men to make arrangements to meet for sex.  Instead of the expected boy or girl, the men (some very young themselves) would discover a group of burley body-builders who used their fists to “re-educate” them,  force them to drink their own urine, etc., with all of this filmed, then posted on the Internet.  There was a dangerous tendency for supposed ‘anti-paedophile’ groups to be a front for gay-bashing thugs.