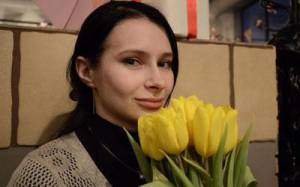 There are echoes of the lawlessness demonstrated with respect to Nadiya Savchenko in the plight of Maria Varfolomeyeva, a young Luhansk journalist and civic activist who was taken hostage by Kremlin-backed militants of the so-called ‘Luhansk people’s republic’ [‘LNR’] at the beginning of the year.  The militants are now claiming that she was helping the Ukrainian armed forces as a spotter and ‘spy’, and are threatening a ‘court trial’ and 15-year sentence.

Varfolomeyeva was captured on Jan 9, 2015, when there had not been any shelling in Luhansk for some months.  It would seem that either the militants themselves or Russia’s RIA Novosti news agency discovered this serious flaw in their accusations that she was helping direct Ukrainian shelling, and fiddled the dates.  The RIA Novosti report mentions that, according to ‘LNR minister of state security, Leonid Pasechnik, she faces up to 15 years imprisonment, then says that:

“On 27 January 2015 Luhansk was subjected to the latest shelling.  According to the investigators, Varfolomeyeva passed the coordinates for shelling to the Ukrainian military.”

The pro-Kremlin agency could assume that its readers would not understand that Varfolomeyeva would have had to pass on the said information from the basement in Luhansk where the militants had been holding her prisoner for 3 weeks already.  It is probably also aware that Nadiya Savchenko has a very similar and irrefutable alibi for virtually identical charges, with this not preventing court after court in Russia from extending or upholding her detention.

The Russian agency simply reports without comment the claim by the investigators that “Varfolomeyeva’s guilt has been fully proven, and the spotter now awaits trial”.

As ‘proof’ of Varfolomeyeva’s guilt, Pasechnik has produced a photograph of the journalist holding a Right Sector business card which they found on her social network account.

They also claim her camera to be evidence of ill-doing and have posted the video of her interrogation on the Internet.  In it, they grill her on why she was caught while trying to take photos of apartment blocks where militants are living.  Journalists do take photos, and in this case Varfolomeyeva says that she was taking photos for a journalist whom she names and who is now living in Kharkiv.

This is not the first such video that the militants have posted for their own dubious purposes.  It is distressing to watch the young woman tormented on tape, and forced to listen to a barrage of lies and propaganda.  There is no overt violence or brutality, but it is quite clear that the woman is imprisoned, and doubtless guarded by at least one man with an automatic rifle.  Underneath the title, claiming her to be a spotter and Right Sector spy, the words are written: “We are Russians, and God is with us”.

Varfolomeyeva’s situation is disturbingly similar to that of Nadiya Savchenko.  Both women were captured by LNR militants who then later came up with similar charges of being spotters.  Savchenko has a provable alibi for the specific charge against her, while Varfolomeyeva could not have been helping the Ukrainian soldiers target LNR objects at the time she was taken prisoner since there had been no shelling for months.

In Savchenko’s case, Russia has tried to conceal the most unsavoury aspects of the case, especially the fact that the former pilot was abducted to Russia after being captured by militants in the Luhansk oblast.  Manipulation and lies have been swallowed by judges who know what rulings are expected of them.  Back in Luhansk the militants have tried to change the date of Varfolomeyeva’s capture in order to make their accusations credible.  The real date can easily be proven, yet there are no grounds at all for believing that a so-called LNR ‘court’ would pay heed to such evidence, or that it would even be given the chance to hear it.

It is vital that Maria Varfolomeyeva is included on the list of prisoners to be exchanged.  She is very clearly an “unlawfully held person” making her release an obligation under the Minsk Protocol.  Like so many other commitments that Russia and its proxies in Donbas are  failing to fulfill.