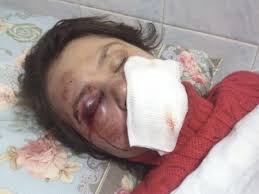 15 months after Tetyana Chornovol, then a EuroMaidan activist and well-known journalist, was savagely beaten and left for dead on the side of the road, two of the men arrested appear to have been convicted of the attack, but released from custody.

The only information about this disturbing development is from the People’s Front party which Chornovol now represents in parliament.  In a strongly-worded statement, the party condemns the ruling on April 6 issued by the Boryspil City-District Court, saying that it demonstrates the degradation of Ukraine’s judicial system.

According to this statement, the charges carried a sentence of up to 5 years imprisonment.  Serhiy Kotenko was sentenced to 1 year, 3 months and 10 days – the period he has spent in detention. Roman Zalyubovsky was released “under the amnesty law for 2014”.  The party says that the ruling will be appealed.

More details will hopefully emerge soon, but it is clear already that the court did not consider the fact that this was almost certainly a commissioned crime, committed against a prominent activist and journalist who had repeatedly exposed corrupt dealings by those in power.

Journalist Vitaly Portnikov is also scathing in his assessment of Ukraine’s justice system and points out that “while we don’t know the names of those who ordered high-profile crimes, we do not differ much from Russia”.

He adds that the attack on Chornovol marked the beginning of the mass beatings, intimidation and killing of EuroMaidan protesters, with the regime of Viktor Yanukovych no longer showing any restraint.

Those who ordered the killing of journalist Georgy Gongadze have also never answered for their crimes, but his murder was a long time ago, whereas the crimes against Chornovol, and Nebesna Sotnya [Heavenly Hundred – those killed during the EuroMaidan protests] are recent.

The case – and horrific images of the beaten journalist who would surely have died had her car not been noticed – caused international outcry, especially given Chornovol’s exposures of corrupt dealings and / or the sumptuous homes of Yanukovych, his Prosecutor General Viktor Pshonka, Interior Minister Vitaly Zakharchenko and others .  Ukrainska Pravda spelled out the suspicions very clearly in an article entitled: “Yanukovych, Azarov, Firtash, Zakharchenko – who Chornovol writes about, or People whom we suspect of ordering [the attack]”

Serhiy Kostenko claimed to have agreed to show the car which he said he was trying to sell to Roman Zalyubovsky, a 34-year-old security guard from Dniprodzerzhynsk and that he had been hijacked by Zalyubovsky and another man who used the car for the attack.  There were problems with his version of events, however Chornovol was reported to have only identified one of the men detained as her assailant.

By early February, the so-called investigation had turned into farce with the Prosecutor General’s Office claiming to have ‘solved’ the case, and found the attack to have been ‘hooliganism’, a case of road rage after Chornovol cut in front of another car.   It announced that another suspect, Andriy Zinchenko had been detained at Ukraine’s request in Moscow.

Chornovol responded immediately saying that it was Yanukovych that she had “cut in front of”, and promising that she would continue to do so.  She later stated clearly that she believed Yanukovych to be behind the attack on her.  She was convinced, furthermore, that the aim had been to kill her.

Some 6 months after Yanukovych fled, it was announced in Russia that Zinchenko had been granted asylum.  The Izvestia article concentrated more on defamatory remarks about Chornovol’s political leanings than about the serious charges against Zinchenko.

Given Russia’s undeclared war and virulent propaganda campaign against Ukraine, the Russian reaction to an extradition request was probably to be predicted.  In April 2015, the Boryspil court ruling and failure to address the issue of who was behind the attack were not.