Attack on Pro-Ukrainian Activist in Crimea 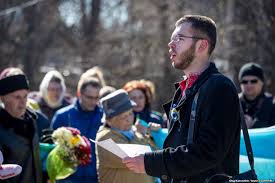 In just over a month Leonid Kuzmin has lost his job as a teacher, been sentenced to 40 hours community work and warned of ‘extremism’ for a Ukrainian flag. He has now faced an attack by young thugs which left him with concussion.

Kuzmin told the Crimean Human Rights Field Mission that he was stopped by a former student on Friday evening, April 17.  One of the ex-student’s mates recognized the activist and began insulting him as a Ukrainian and supposed nationalist.  Kuzmin says that he tried to turn away from them to avoid conflict, but was hit on the head with a bottle.  The assailants kicked him a few times before leaving the scene.  He was treated in an accident and emergency unit for concussion and is planning to report the incident to the police.

On March 9 Kuzmin organized a gathering to mark the 201st anniversary of the birth of Ukrainian poet Taras Shevchenko.  The event which can be watched here received the required ‘authorization and was totally peaceful, yet four people ended up detained and facing charges.

On March 12 Kuzmin, Veldar Shukurdzhiyev and Alexander Kravchenko were sentenced to 40 hours community work for what both the police and the court deemed use of ‘prohibited symbols’ – namely the Ukrainian flag and ribbons in the colours of the flag.  Over the following two days, each received warnings from the centre for countering extremism about alleged ‘extremism’.  At the end of March Crimean Tatar national movement activist Kurtseit Abdullayev was ‘convicted’ of the same alleged ‘offence’ for holding a Ukrainian flag with the words ‘Crimea is Ukraine’ on it at the same March 9 gathering.

While abuse of Russia’s loose anti-extremism legislation has been frequent ever since Russia annexed Crimea, this was the first case where a court imposed a sentence for a Ukrainian flag.