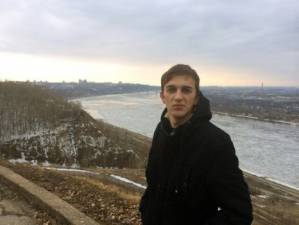 A Russian military court has sentenced a Belarusian IT specialist working in Nizhny Novgorod to two years imprisonment for what it deemed ‘public calls to terrorism’ (Article 205 § 2 of the Criminal Code). The material, including pictures, were on his social network page on VKontakte and certainly do not appear to warrant the charges.  If something especially incriminating was deleted, it is strange that this is nowhere reported.

According to Belarussian activist Pavel Yukhnevich, Kirill Silivonchik, a 22-year-old with 3rd level invalid status, was arrested at his workplace in Nizhny Novgorod on Dec 18.  Colleagues were also detained but later released.

The sentence passed on April 9, in October 2014 states that Silivonchik “posted photographs and posted comments in which he expressed his attitude to the events in Ukraine, called to “kill Moskali” [a fairly derogatory term for Russians - HC], “return Crimea to Ukraine”, etc. Among the photographs and pictures, for example, there was one where a Ukrainian solder is ripping up a Russian flag and stamping on the coat of arms”.

The VKontakte page has now been deleted, but the pictures and texts can be seen, for example, here.  Their artistic merit is more than questionable, but these are cited as justification for a 2-year term of imprisonment.  The only call to violence is in the alleged call to ‘kill moskali’.  If this was in fact there, it was much milder than the call made by the Russian fascist ideologue Alexander Dugin and discussed on pro-Kremlin television channels.  He stated that “Ukrainians must be killed, killed, killed, there can be no discussion on that subject”.  He has not faced any consequences from the authorities, let alone prosecution.

Yukhnevich says that Silivonchik chose to ‘admit guilt’ in order to receive a milder sentence and did not therefore appeal against the sentence.  Instead of the possible 5-7 years, he was sentenced to 2 years in the mildest regime prison colony.

He also accepted the services of a lawyer – Yulia Baronets – provided by the investigators which makes it difficult to ascertain the full details of this case.  She told the newspaper Nasha Niva, for example, that he hadn’t been sentenced for the pictures but for “public calls to terrorism”, but couldn’t remember any and could not find the supposedly open record of the court hearing.

Grani.ru reports that this same lawyer was taken on to defend Vladimir Golubyov, a Nizhny Novgorod physicist charged with state treason. Golubyov says that he finally got rid of her after she concentrated only on getting him to ‘confess’.

Worth noting that Svetlana Davydova, the mother of 7, including an infant she was still breastfeeding, also received the ‘services’ of a lawyer who encouraged her to ‘confess’ and who did not even mention to the court her family circumstances.  She was only released thanks to public outrage over that case.

Yukhnevich reports that Silovonchik’s relatives back in Belarus believe that it is best to remain silent and that publicity could hurt the young man.  They also, however, think that there is a chance that he could be released under the amnesty planned for Victory Day (May 9).  In this they are mistaken since the amnesty does not cover such charges (or indeed any of those who are serving politically motivated sentences in Russia.

Belarusian activists do not agree that silence is the safest option and have initiated a campaign in support of Kirill Silivonchik who certainly appears to have been convicted for expressing his views on a social network page.

Support and publicity beyond Belarus is also vital.  (Please use the hashtag: #FreeBelarusian) 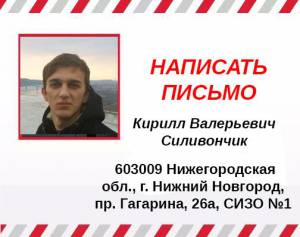 Letters can be sent to Kirill Silivonchik at this address:

Please bear in mind that any letters will be read by the prison authorities and should not make it any comments that could harm him.