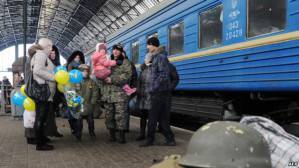 A Ukrainian group helping victims of domestic abuse says the conflict in eastern Ukraine has led to a dramatic upsurge in violence against women across the country.

RFE/RL: La Strada says the number of women calling its hotline for victims of domestic violence, human trafficking, and gender discrimination has spiked in recent months. How big is this increase?

Aliona Zubchenko: We took a total of 7, 000 calls in 2014, 80 percent of which related to domestic violence. This year, the figure has risen more than twofold. In the first three months of this year, we had more than 2, 600 calls.

RFE/RL: Your group blames mounting domestic violence on the armed conflict in eastern Ukraine. How are the two connected?

Zubchenko: Women call and tell us that they were married for 15 years, that they had a good family, and that their husbands were never violent, never hit or insulted them. Then they left for the war and returned completely changed. They are violent. They beat the children. They beat their wives and drink. These women don’t know what to do because they don’t recognize the husbands they had before the war in these men.

RFE/RL: How do La Strada’s psychologists explain this change of behavior in men who return from the fighting in eastern Ukraine? Can we talk about posttraumatic stress disorder?

Zubchenko: We are talking about posttraumatic stress disorder -- 100 percent. We are talking about psychological trauma, when people there resort to violence for several months because it’s the only way to survive, and then come back home. They have become used to violence and consider it normal, so they continue to display this behavior, this time with their families.

There are situations when men come back disabled after being held captive. We have cases where men were castrated. This is a massive blow for men. We have calls from parents whose 20-year-old sons committed suicide after being held captive and castrated, because they could no longer live with this. But there are other situations when men who have lost their sexuality try to compensate by being violent.

Very often, domestic violence is connected to the fact that men start abusing alcohol after returning. This is a big problem.

RFE/RL: Do soldiers and fighters seek psychological help, too, or are they reluctant to do so?

Zubchenko: There is a stereotype in Ukrainian society that real men do not consult psychologists, that the best psychologists are a friend and a bottle of vodka. Men think this will make them feel better, which is a huge mistake. When they are drunk, they can become violent.

Zubchenko: We get some calls from occupied territories, but not enough to understand whether we are dealing with isolated cases or with a widespread problem. In addition, neither we nor Ukrainian authorities have access to the occupied territories, so we can only guess what is happening there.

We have, however, received calls from women who were subjected to sexual violence in the occupied territories. They say separatists seize women, lock them up in basements, and sexually abuse them. Unfortunately, we can only listen to these calls. Our psychologists can offer counseling to these women, but we cannot turn to law-enforcement authorities because they don’t have access to these areas.

RFE/RL: Has your hotline received many such calls?

Zubchenko: About 15, but not everyone is able to get in touch with us. Our hotline is a nationwide Ukrainian hotline, but not all operators work in the Luhansk and the Donetsk regions. Out of Ukraine’s three main operators, two don’t work there. In Crimea, Ukrainian operators don’t work at all. So Crimean women cannot call to tell us what is happening there.

RFE/RL: Psychological help aside, are there enough shelters in Ukraine for women who flee severe domestic violence?

Zubchenko: We have a network of shelters for victims of domestic violence. There are shelters in every region, but on average they can each accommodate about 30 women and children. The problem is that there is usually only one shelter per region, and some regions have 10 million residents. So 30 beds, of course, are completely inadequate for a population of 10 million.

RFE/RL: What are your thoughts about the recent surge in domestic violence? In your opinion, is it a temporary byproduct of the conflict or will it have long-lasting effects on Ukrainian society?

We can assume that the number of suicides or murders will rise, because what begins as minor violence against women often grows into murder. The war in eastern Ukraine continues. The number of displaced people and soldiers who fought there will continue to grow. The consequences of what is now taking place in our country will be felt for decades.