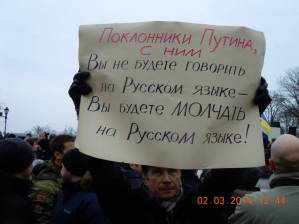 In its latest report Freedom of the Press 2015, Freedom House speaks openly of Russia’s invasion of Ukraine, and gives Crimea under Russian occupation a damning assessment on all rights, including freedom of expression.

Ukraine has been upgraded to Partly Free, after falling badly under the presidency of Viktor Yanukovych.  The report specifically relates the improvement to “decreases in political pressure on state media and hostility toward independent voices”.  Russia on the other hand “tightened its grip on the media, suppressing independent reporting and deploying state-controlled outlets to attack domestic dissent and perceived foreign adversaries.”

Crimea under Russian occupation for just over a year is assessed separately – and damningly as one of the ten “worst of the worst”.  It is rated at 94 on a scale to 100 (where 100 is the worst), against Russia at 83, and Syria and Iran at 90.  Ukraine this year is at 58.

The report focuses on other rights abuses in Crimea as well, pointing out,  for example, that in the September 14 ‘elections’, no pro-Ukraine parties were allowed to participate.  As reported at the time, the Mejlis or Crimean Tatar representative assembly called on Crimean Tatars and others concerned about grave rights violations to boycott the elections.  The major offensive on the Mejlis and Crimean Tatars generally followed swiftly.  See Armed Offensive against Crimean Tatar Mejlis and more detail about the current criminal prosecution clearly targeting Crimean Tatars here.

“The Russian occupation authorities use intimidation and harassment to eliminate any public opposition to the annexation of Crimea and to the current government. The Russian Federal Security Service (FSB), the local police, and “self-defense” units made up of pro-Russian residents enforce this political order. Approximately 20, 000 people who opposed Russian rule fled the territory by the end of the year. Ukrainian political parties are not able to operate, and the Crimean Tatars—the only group that has continued to openly oppose the Russian occupation—has faced considerable political persecution”.

The report notes that free speech is “severely limited in Crimea. In addition to other restrictive Russian laws, a December 2013 amendment to the Russian criminal code that took effect in May 2014 banned public calls for action aimed at violating Russia’s territorial integrity, meaning statements against the annexation, including in the media, could be punished with up to five years in prison.”

“Under Ukrainian rule, Crimea hosted a flawed but relatively pluralistic media environment. The occupation authorities have essentially cut the territory off from access to Ukrainian television, with armed men seizing the transmission centers and imposing Russian broadcasters. Only a few Ukrainian entertainment channels are left on some cable systems. Independent and pro-Ukrainian media no longer function in Crimea. A television station affiliated with the anti-Yanukovych Ukrainian political opposition, TV Chornomorska, was taken off the air in March, and bailiffs sealed its premises on August 1 under court order.

The report can be read in full here.

Since it appears to have gone to print before the latest silencing of all but one Crimean Tatar media, details can be found here Crimean Tatar TV silenced, searches and arrests continue

The image above is from a protest held back in March 2014.  It tells Crimeans that under Vladimir Putin, they won’t speak Russian, they will be SILENT in Russian.