Crimean “Patriots” called on to denounce opponents of annexation to FSB 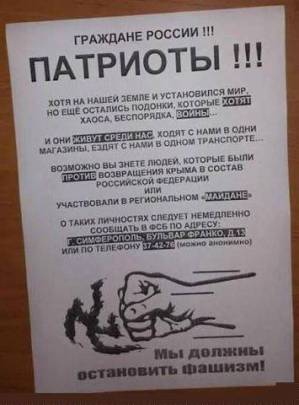 Leaflets have been circulated in Simferopol calling on “citizens of Russia” to report people who opposed annexation or who took part in the Crimean EuroMaidan to the FSB [Security Service].  Although probably unlikely that the initiative came from the FSB, the leaflets are quite in line with recent efforts to find ‘victims’ so as to prosecute opponents of annexation.

The leaflet, posted by the Crimean News Agency QHA is worth quoting in full:

“Citizens of Russia! Patriots! Although peace has been established in our land, there remain scum who want chaos, disorder, war…. And they are living among us, go to the same shops as up and travel in the same public transport …

Perhaps you know people who were against the return of Crimea to within the Russian Federation or who took part in the regional Maidan. You should immediately report such individuals to the FSB at: Simferopol, No. 13 Ivan Franko Boulevard or by phone: 32-42-67 (it can be anonymous).  We must stop fascism”.

There were leaflets both during EuroMaidan and after Russia’s invasion of Crimea which targeted specific civic activists, for example, Oleksandra Dvoretska.  Given the abduction, torture, disappearances and murder of opponents of annexation, most activists whose photos and addresses were posted on such vile leaflets saw no choice but to leave Crimea.

While there is nothing to indicate who the authors of this leaflet were, recent reports of FSB activities bear disturbing similarities.

Since January this year the occupation regime has been pursuing a criminal ‘case’ of quite unprecedented cynicism. The charges themselves have no foundation in truth but also relate to a demonstration on Feb 26, 2014, before Russia invaded and annexed Crimea, and are therefore entirely outside Russian jurisdiction.

The ‘case’ is very clearly targeting Crimean Tatars, and the five men detained include Akhtem Chiygoz, Deputy Head of the Mejlis, or Crimean Tatar representative assembly and Eskander Nebiyev, a photographer from the now silenced Crimean Tatar TV channel ATR who was there in his professional capacity.

There are ongoing summonses, searches and interrogations of members of the Mejlis and other Crimean Tatar bodies, as well as ordinary Crimean Tatars who were seen on photos of the demonstration.  Russia’s Novaya Gazeta reports that the investigators were so short of any material, that they invited Simferopol residents who had been subjected to force “even in the absence of bodily injuries” to come forward.

The same newspaper cites the witness account of its own correspondent, Pavel Kanygin, who was present at the Feb 26 demonstration.  His report confirms that even if such a criminal case had any legitimacy in law, it would have no basis in fact, since all representatives of the Mejlis actively sought to calm the crowd, and there are no grounds for treating the Crimean Tatars present as the ‘villains’, and the pro-Russian activists – ‘victims’.  (More details here)

This is not the only case where Russia and its puppet ‘prosecutor’ in Crimea, Natalya Poklonskaya are displaying such legal nihilism.  As reported here, the trial is also underway of Oleksandr Kolchenko, a EuroMaidan activist over alleged minor injuries caused to a Berkut riot police officer (and at the time fellow Ukrainian national) during EuroMaidan in Kyiv on Feb 18, 2014.  Kostenko was detained before the criminal case was launched raising serious doubts about the search for supposed ‘suspects’.  Poklonskaya is claiming to have 49 ‘victims’ injured during EuroMaidan and other arrests may follow.

With such forms of ‘law enforcement’, it would not be surprising if various individuals decided that wholesale denunciations were just what was needed.