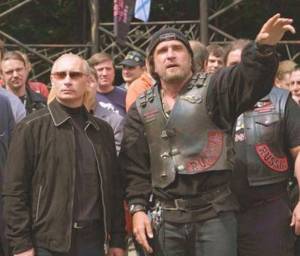 The Sevastopol authorities have issued a decree handing 266.5 hectares of land to the Night Wolves, the Russian ultra-nationalist and pro-Putin bikers who played a role in Russia’s annexation of Crimea in 2014.  While Vladimir Putin’s favourite bikers have gained most publicity in the west over their controversial journey to Berlin to mark the seventieth anniversary of the end of WWII, Russian opposition figure Alexei Navalny has pointed to other interesting information.  Over recent years, for example, the Night Wolves have received substantial amounts in State grants for events including ‘story-telling’ to children with a nationalist and often anti-western slant.

Now they have been awarded a substantial piece of land outside Sevastopol, for virtually no rent, since the decree states that as a non-commercial youth organization, they need pay only 1% of the land’s value.   The land is allocated for a “multi-functional sport and patriotic centre for extreme forms of sport.

Russia’s President Vladimir Putin has ridden with this bike club whose members are known for giving him active and vocal support, but hardly fit the description of a youth organization.  The Night Wolves are headed by 52-year-old Alexander Zaldostanov, a friend of Putin’s known as the Surgeon.

QHA reports that Zaldostanov is on both the US and Canadian sanctions list over his active role in helping the so-called ‘self-defence’ armed paramilitaries and Russian soldiers take control in Crimea from Feb 27, 2014.  The organization as a whole is on the US list.

In Crimea, however, and Moscow, they are given VIP treatment.  Tom Parfit reports the Night Wolves appearance at a rally on the first anniversary of the pseudo referendum on March 16, 2014, recognized by no democratic countries but used by the Kremlin to claim legitimacy for Russia’s annexation of Crimea.  Zaldostanov is quoted as saying that “by the will of God and through the hands of President Putin, the years of humiliation under Ukrainian rule are over.”

Officially it is by the will of the Sevastopol authorities that the Night Wolves, as an ‘autonomous youth organization’, have received such a generous amount of land

Among the activities funded by the taxpayer in Russia have been New Year events for children with loads of stunts, pyrotechnics and special effects and a very specific nationalist bent.

As Zaldostanov explained to RIA Novosti, during this last year’s performance in a “fairy tale manner accessible to children, they were told about events in 2014: Maidan, the reunification [sic] of Crimea with Russia and the disgruntlement over this from western countries.”  The characters in their performance included traditional New York figures, like Grandfather Frost, but also the Night Wolves themselves and NATO.  All this is aimed at providing “an alternative” to all the foreign cartoons, etc. and promoting moral and patriotic themes.  At its most “accessible”: evil forces from abroad are defeated and Russia wins out.

Navalny published his report on May 5, explaining that this or that grant awarded to Zaldostanov gets mentioned but that “virtually nobody realizes the scale with which the Night Wolves are fed from the state budget.”

On May 13 Navalny narrowly escaped having his latest suspended sentence on highly dubious charges turned into a real term of imprisonment. One day after the Night Wolves received a generous grant from Russian-occupied Sevastopol.