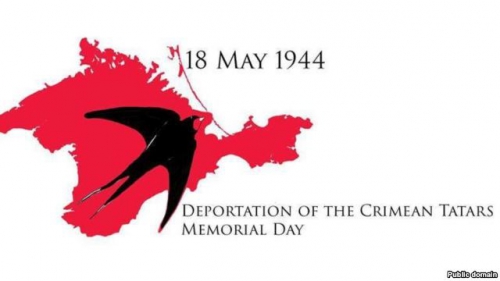 The swallow is a symbol of spring, of hope and renewal. And of return for those Crimean Tatars once again exiled from their homeland. Their Crimean home is now in red, as an SOS message to the entire civilized world, on behalf of those whose rights are being  violated

The 71st anniversary of the Deportation of the Crimean Tatar People is being marked in Russian-occupied Crimea by bans, interrogations and ‘warnings’ of Crimean Tatars, and some Ukrainian activists (see links below for details).

The symbol this year is one of great poignancy.  When the swallow leaves its nest.  Sevhyl Musaeva-Borovik, Chief Editor of Ukrainska Pravda is Crimean Tatar, though has lived in mainland Ukraine for the last 10 years.  She and her younger sister were trying to find a symbol for the 1944 Deportation, and decided on the swallow, as symbol of hope and renewal, “and because swallows always return to their own nest”.   She notes that in Ukrainian villages people anxiously await the swallows’ return.

“I think it’s very important now to give people such hope. There are displaced people from Crimea, there are people living there who are persecuted – for that reason we decided to colour Crimea red.  The peninsula is sending out an SOS message to the entire civilized world: this is territory where human rights are violated, where there is no freedom of speech, where people can end up in SIZO [detention] for their position.”

It is worth noting that Sergei Aksyonov, the leader installed after Russian soldiers seized control in Crimea in Feb 2014 called the Crimean Tatar TV channel ATR a hostile element in part because it gave, he said, Crimean Tatars the hope of returning to Ukrainian rule.

The occupation regime banned remembrance gatherings on May 18 last year, though the initial attempt to ban any gathering failed.  The reason was put most poignantly by Refat Chubarov, Head of the Mejlis or Crimean Tatar representative assembly :

“Can you imagine – there are 22 regions and in each region there are places where people come to honour the dead, places with memorial stones, and Crimean Tatars on May 17-18 don’t have the right to go there together to pay their respects, to honour those people! I don’t know what kind of person you have to be to not think of the consequences! I don’t know how to stop people so that they don’t go there. It’s like telling everybody “Don’t go to your holy places, don’t visit your dead” If they prohibited you, how would you act?  Force can stop everything, or not everything – it won’t stop the human spirit.”

Since then Refat Chubarov has been exiled from his homeland, as had earlier Mustafa Dzhemiliev, veteran Crimean Tatar leader and Ukrainian MP who was 6 months old in May 1944.   Others defending Crimean Tatar rights, such as Sinaver Kadyrov and Eskender Bariev have also been either deported or prevented from returning.

Please share the image here in memory of the Victims of the 1944 Deportation of the Crimean Tatar People, and as warning of the danger Crimean Tatars are facing now.

Please help also in circulating the information in the texts below.

There is an excellent video here: Crimea: Home of the Crimean Tatars   https://youtube.com/watch?v=cQAqBvvKJro&feature=youtu.be