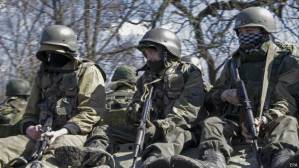 While the Kremlin continues to deny deployment of any Russian soldiers in Ukraine, including two spetsnaz soldiers just captured, the BBC Russian Service reports that a brief protest was held outside a military base in Tolyatii on the Volga with around 10 Russians demanding that Russia withdraw its forces from Ukraine.  The location was no coincidence.  One of the two soldiers whom Ukraine says were captured in Shchastya in the Luhansk oblast identifies himself on a video as being a sergeant from the Tolyatti third brigade.

The BBC quotes a local journalist Sergei Petrov for its information about the protest. He told them that the protest began at 10 a.m. and lasted no more than 20 minutes, before the protesters were driven off by police who did not, however, detain them.  It is not clear whether this was unusual tolerance by Russian police officers for an “unauthorized protest”, or because the details about the protest, during which the participants chanted anti-war slogans and tried to unfurl placards demanding that the soldiers supposedly not in Ukraine are withdrawn, would certainly not have looked good on any detention protocols.  The protesters refused to reveal their names to the journalist, but one said that they had come to the military base because of the news about the capture of two Russian spetsnaz [special force] soldiers in Ukraine.

Ukraine has released details about the capture on May 16 of two alleged Russian soldiers, one of whom is questioned from his hospital bed in the video (with English subtitles) here:  https://youtube.com/watch?v=TotTleGajV4   He identifies himself as Sergeant Alexander Alexandrov, and the other man captured as the commander of their unit – Captain Yefgeny Yerofeyev.  They are from the Tolyatti 3rd spetsnaz brigade, and have been in Ukraine, he says, since May 6, involved in military surveillance work.

They were injured and captured near Shchastya during a confrontation, which Ukraine says was between a military group from the SBU [Security Service] counter-intelligence department and up to 30 Russian spetsnaz soldiers.  One Ukrainian soldier was killed, and another injured.

The SBU has said that the men will not be part of any exchange of prisoners, and is planning to charge them with terrorism.

In a brief response reported by the official RIA Novosti agency, Dmitry Peskov, Press Secretary of the President’s Administration stated twice that there are no Russian soldiers in Ukraine.  He did, however, refuse to make any comment about checks on the information, saying that the question should be addressed to the Defence Ministry.

Radio Svoboda reports that it tried to do precisely that, but its request for information from the Defence Ministry was ignored.

Ten Russian paratroopers were captured at the end of August last year, and later exchanged for Ukrainian National Guard soldiers taken prisoner in their own country by Kremlin-backed militants and / or Russian soldiers.  Russia then acknowledged that they were Russian soldiers, but claimed that the men, captured some 30 kilometres inside Ukraine, had “strayed”.  This time, it seems likely that there were plans from the outset to deny that the men were Russian soldiers.  LB.ua reports that a head of the so-called ‘Luhansk people’s republic’ proved unusually forthcoming, stating that two of its soldiers had been captured, with this swiftly reported by Russia’s RIA Novosti.  The official line by Monday evening had veered even further away from credibility to that these two men from the same brigade were in fact former spetsnaz soldiers

The end of August 2014 saw the first reports in Russia of Russian soldiers being killed in Ukraine.  At that time Vedomosti.ru publicly asked: If Russia is not at war, then who is in those freshly-dug graves?   Pskov journalist and politician Lev Schlosberg provided the answer about some of the graves, reporting that virtually the whole of a Pskov paratrooper regiment had been killed in Ukraine (more details about the regiment, and about the brutal attack on Schlosberg just days later here).  Other civic activists and NGOs reporting deaths of soldiers, including conscripts in Ukraine, have faced punitive measures, including the prosecution on questionable charges of 73-year-old Ludmila Bogatenkova and the inclusion of the St. Petersburg branch of Soldiers’ Mothers on the list of ‘foreign agents’ just days after their report at the end of August 2014.  Pressure on the relatives of those killed was also reported very early on.

Russian pro-Kremlin media finally reported the first deaths of Russian soldiers but claimed them to be ‘volunteers’ who had taken leave to fight in Ukraine.

This argument is slammed in the report Putin. War completed by the associates of slain Russian politician Boris Nemtsov and published on May 12.  They point out that “soldiers on contract service with the Russian Federation armed services are expressed prohibited from taking part in military action during leave”.

Their report provides a damning expose of Russia’s lies regarding its aggression against Ukraine.  It should be stressed, however, that none of the information regarding the number of Russian soldiers in Ukraine, etc. was new.  There had been numerous reports before, not only from NATO, but from Amnesty International and in a comprehensive study by Igor Sutyagin from the Royal United Services Institute.

The lies were also consistently exposed by Boris Nemtsov who was gunned down near the Kremlin on Feb 27, this year.  He and Leonid Martynyuk produced a film back in 2014 entitled ‘The Warmonger’ [Разжигатель войны] https://youtube.com/watch?v=vfFhnqw0sE8  (press icon at the bottom for English subtitles).

The response to the bleating denials from the Kremlin is Boris Nemtsov’s, from his final interview just two hours before he was murdered.  There was one simple question to be put to Russian President Vladimir Putin, he said:

“Why are Russian soldiers dying and you, as Chief Commander, Mr Putin, deny them, lie and claim that they’re not fighting?  We see the graves of these soldiers – we see them in Kostroma, in Pskov, in Nizhny Novgorod…."