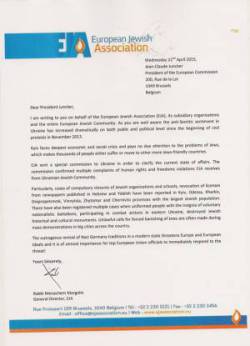 The Kremlin had two options when Russian President Vladimir Putin’s claims of a “rampage of reactionary forces, nationalist and anti-Semitic forces” in Ukraine were so roundly debunked by Ukraine’s Jewish leaders, authoritative experts on anti-Semitism and by subsequent developments in Ukraine.  Instead of laying its “Ukrainian anti-Semitism card” to rest, it opted to spin out more brazen lies and distortion.  Its fakes keep being exposed and yet it comes back for more.

In his annihilating exposé of the latest propaganda offensive, leading expert on xenophobia and anti-Semitism in Ukraine Vyacheslav Likhachev suggests that the Kremlin’s propaganda campaigns come in waves.    The last was back in October 2014 when Izvestia published an article with a truly alarming title: “Right Sector” has declared war on Jews in Odesa”   It claimed, among other things, that the ultra-nationalist Right Sector had savagely beaten at least 20 Jewish people and robbed and attacked many others.  The story was immediately taken up by Russia’s LifeNews and other pro-Kremlin channels.  And just as promptly, and most embarrassingly, debunked in an official response from Berl Kapulkin, Press Secretary of the Odessa Jewish Community (see Russian ‘Right Sector’ War against Odesa Jews Debunked).

With spring in the air, the Kremlin could have sought a new beginning, but didn’t.  Aside from one ominous new development in Russian-occupied Crimea, both the methods and the lies are drearily familiar.

On May 18, a number of media in different languages produced material on anti-Semitism in Ukraine, with the pretext being a letter purportedly written by Rabbi Menachem Margolin, Head of the European Jewish Association [EJA] to Jean-Claude Juncker, President of the European Commission.

Likhachev has been told by Margolin with this confirmed in a written statement from the EJA, that no such letter was ever written.  This fake, written in very clumsy English, can be seen here under an article in German claiming that the new Ukrainian authorities “have never made any secret of their plans to cleanse the country of non-Ukrainians. Right Sector fighters are systematically cleansing Ukraine of foreigners, with Jews of course the first on their blacklist”.

If the sites abroad which have so far published this crude fake are fairly marginal, the same cannot be said of its coverage for Russian-speakers. Likhachev points especially to a feature on the 23.00 Vesti or news programme on the widely viewed Rossiya 24 TV channel (most easily viewed here).

The story was announced at the beginning of the news programme as follows: “New exodus of Jews from Ukraine: Jewish organizations accuse Brussels of hushing up the problem of neo-Nazism in Ukraine”.

The presenter speaks of a “second exodus” which “for some reason” is not given attention, and cites numbers of Jews who have left Ukraine.

“The statistics are frightening, but a people who have on more than one occasion been placed on the edge of survival and who for that reason are more acutely aware of the approaching danger have grounds to fear.” The presenter mentions “the glorification of UPA” [the Ukrainian Insurgent Army], asserting that UPA fighters (during WWII) had the blood of Jews on their hands, anti-Semitic slogans which are claimed to be heard more and more at supposedly peaceful demonstrations, and “systematic closure of Jewish organizations and schools”.

The text then goes on to claim that the letter demanding swift response was sent on April 22, but was only published on the site of CNN now.  The following excerpt from this supposed Rabbis’s letter is then read out in Russian translation:

“Particularly, cases of compulsory closures of Jewish organizations and schools, revocation of licenses from newspapers published in Hebrew and Yiddish have been reported in Kyiv, Odessa, Kharkiv, Onipropetrovsk, Vinnytsia, Zhytomyr and Chernivtsi provinces with the largest Jewish population. There have also been registered multiple cases when uniformed people with the insignia of voluntary nationalistic battalions, participating in combat actions in eastern Ukraine, destroyed Jewish historical and cultural monuments. Unlawful calls for forced banishing of Jews are often made during mass demonstrations in big cities across the country.

The outrageous revival of Nazi Germany traditions in a modern state threatens Europe and European ideals and it is of utmost importance for top European Union officials to immediately respond to the threat!”

Likhachev confirms that there has been an increase in the number of Jews leaving for Israel.  He points out, however, that Jews are in a hurry in the first instance “to leave the military zone and territory seized by Russia and its proxies”,   He adds that effectively everybody who can is leaving, it’s just that Jews have somewhere to go, since Israel is willing to take them. The numbers leaving are also influenced by “the difficult economic situation caused by Russian aggression”.

What he has not come upon in talking to Ukrainian repatriants in Israel and Israeli officials is any mention of “Ukrainian neo-Nazism” as a reason for emigrating.

He points out also that in percentage terms there has been a similar rise in the number of Jews leaving Russia with those figures not explainable by military conflict.

Likhachev calls the claims about compulsory closure “flagrant lies”, and those about revocation of licences simply absurd, since anybody familiar with the situation in Ukraine would know that there are no publications in Hebrew and only one or two Ukrainian newspapers who occasionally publish a page in Yiddish.

He is not aware of even one of these allegedly “multiple cases” of volunteer battalion soldiers destroying Jewish monuments. There were anti-Semitic slogans at anti-government demonstrations in Vinnytsa and Ternopil, but they focused – as do a considerable number of statements from Kremlin –backed militants - on the alleged Jewish origins of the country’s leaders.  Claims that there were calls to forcibly resettle Jews are also false.

Since the presenter then interviews two ‘experts’ with a lot to say on the subject, the list of lies could be extended, but it may suffice to mention Likhachev’s identification of the two men.   One is Avigdor Eskin, a radical publicist who justified apartheid in South Africa and who has served time in Israel for right-wing extremism.  The other – Yevgeny Satanovsky – is known at the very least for his threats to hang those Ukrainian Jewish leaders like Josef Zisels who opposed Russia’s invasion and annexation of Crimea.

The video footage is manipulative and misleading with horror stories about supposed grounds for Jewish fears accompanied by, for example, images of clashes during Euromaidan and photographs of a synagogue window broken by football hooligans more than 10 years ago, with the culprits having been prosecuted at the time.  There are photos of Hassidic Jews presumably intended to back up the words about an exodus, yet in fact representing some of the many thousand Hassidic Jews who come on pilgrimage to Uman in Ukraine each year (to the grave of Rebbe Nachman of Breslau).

There are also images of the Ner Tamid Synagogue in Simferopol which had foul graffiti daubed over it within 24 hours of Russian soldiers seizing control on Feb 27, 2014.  At the time many Jewish figures suggested that this was a deliberate provocation and pointed out that there had been no trouble at all before.  It is significant that one of those who expressed such views was Rabbi Misha Kapustin who was soon forced to flee with his family to Kyiv.  He was in danger because of his opposition to Russian occupation, yet at least one Russian propaganda feature showed pictures of him and his family with suitcases and claimed they were fleeing the ‘junta’ in Ukraine.  There are now ominous signs that the occupation regime in Crimea may be planning to pin the Synagogue attack on a young man held incommunicado for over a month and possibly being used for a show trial targeting the Ukrainian nationalist Azov volunteer battalion.

The Kremlin’s propaganda machine has been caught out lying over and over again, with claims of Ukrainian anti-Semitism one of its particular favourites.  The lies often seem grotesquely absurd.  This, however, is also the case with respect to the downing by Kremlin-backed militants of the Malaysian MH17 passenger plane in July 2014, yet Russia continues coming up with one or other far-fetched ‘version’.  The ploy is cynical and clever, and at very least creates the impression that there can be multiple ‘versions’ that are all somehow valid.

There is no validity in those ‘versions’, nor in the various attempts to yet again play the Ukrainian ‘anti-Semitism card”.  Jewish organizations, religious and political figures have been united in calling on the international community to take their information from them, not from Moscow.  It would be helpful too if Jewish organizations in other countries recognized the need to stand firm against cynical attempts to use or arouse anti-Semitism for political gain and publicly condemned this latest primitive fake.