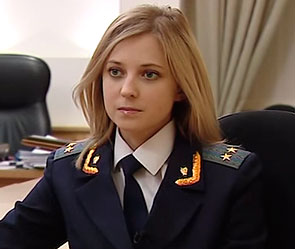 Natalya Poklonskaya, prosecutor in Russian-occupied Crimea, has initiated yet more criminal proceedings over pre-annexation events, once again targeting Euromaidan activists.  The message is clear:  all Crimeans who supported Euromaidan should leave the peninsula, or face prison sentences on legally absurd charges.

The precedent was set early in 2015 with the arrests of Crimean Tatar leader Akhtem Chiygoz over a demonstration the day before Russia invaded Crimea and of Oleksandr Kostenko, who took part in Euromaidan demonstrations in February 2014.  Even had the charges against Kostenko been proved (or even provable), the prosecution would have been absurd given that a Crimean court under Russian occupation could not have any jurisdiction.  This did not stop a judge on May 14 from following Poklonskaya’s demand and sentencing Kostenko to 4 years and 2 months imprisonment.

With this level of lawlessness, the assessment given by Kostenko’s lawyer Dmitry Sotnikov is doubtless correct.  “Better to refrain from visits to Crimea at present… If a person was on Maidan, then he or she should definitely not go to Crimea”.  He adds that in Russia they have video recordings taken by Ukraine’s Security Service which they will use to prosecute people for pre-annexation demonstrations.

Poklonskaya asserts that the investigators have established “the names of all commanders who gathered supporters of the so-called Euromaidan in Crimea” and coordinated all demonstrators’ actions.  In her report on May 30, she claimed that there was considerable proof but that she would not reveal names in the interests of the investigation. They would, however, she asserted, soon be on trial.

She has since announced that she is initiating criminal prosecution over an alleged attempt on the life of Crimean police officers on Feb 19, 2014 near the village of Podibna in the Cherkasy oblast [mainland Ukraine].  Typically, the report on the prosecutor’s website speaks of a group of unidentified individuals yet claims that they were “supporters of the Ukrainian right-wing radical movements Tryzub, Right Sector and VO Svoboda.  They are alleged to have been armed with chains, batons and Molotov cocktails, and to have attacked a coach carrying police officers being sent  to protect public order to Kyiv, inflicting injuries, some serious, on 17 officers.

Radio Svoboda’s Crimean Service reports that it has documents indicating plans to prosecute around 50 people.  The list includes well-known human rights and civic activists, as well as other members of the public.  It also contains the names of people who have faced threats or punitive measures already under Russian occupation.  These include:

Refat Chubarov, Head of the Mejlis or Crimean Tatar representative assembly who was banned from his homeland (and Russia) in July 2014.  More details about another criminal investigation brought by the occupation regime against him for calling Russia’s invasion and annexation of Crimea just that, and demanding that its occupation ends here;

Akhtem Chiygoz, Deputy Head of the Mejlis, in detention in Crimea since Jan 29 on preposterous charges pertaining to a pre-annexation demonstration in Simferopol (more details here);

Oleksandr Kostenko, whose conviction is currently under appeal;

Zair Smedlyaev, Head of the Central Election Commission of the Qurultay, or Crimean Tatar congress ;

Andriy Shchekun, coordinator of the Crimean Euromaidan and Ukrainian civic activist; he was forced to move to mainland Ukraine with his family after his own abduction and torture shortly after Russia’s invasion, and then the abduction of other civic activists who have not been seen since and are assumed dead;

According to Shchekun at least 50 people have been summoned for interrogation.  According to their information, the people were shown a list of names on which the first were the Euromaidan coordinators.  They were also presented with photos and dossiers on those coordinators.

Shchekun points out that none of the Crimean Maidan leaders ever concealed their names or activities, and suggests that Poklonskaya should come to Kyiv together with her law enforcement officers.  “Then we’ll see who arrests whom”.

The trial and conviction of Oleksandr Kostenko and ongoing detention of Akhtem Chiygoz, journalist Eskender Nebiyev and at least four other Crimean Tatars have demonstrated the occupation regime’s contempt for the most fundamental principles of law.  They make it quite clear that under Russian occupation a fair trial cannot be expected in Crimea.

Poklonskaya was open recently in warning Ukrainian “nationalists and radicals” to “draw the correct conclusions” and not come to Crimea, promising that room would be found in Crimean SIZO or remand prisons for all who do come.

There have been equally open threats over the last week about prosecution for alleged offences during Euromaidan, suggesting that one of the aims is to drive all those opposing Russian occupation from Crimea.   Euromaidan, however, doubtless angered the Kremlin and it unfortunately seems likely that the trials of Oleksandr Kostenko in Crimea and imminent trials in Russia of Crimean film director Oleg Sentsov and civic activist Oleksandr Kolchenko will not be the last acts of reprisal against former Euromaidan activists.