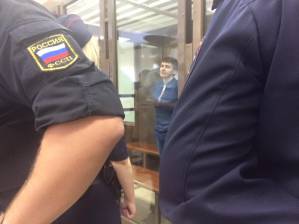 Nadiya Savchenko’s detention has been extended to Sept. 30, 15 months since her official remand in Russian custody.  Any extension for so long needed to be and was not confirmed by the head of the Investigative Committee, Alexander Bastrykin, but this was only one of the infringements which the judge chose to ignore

Judge Pavel Melekhin also paid no heed to the fact, as pointed out by Savchenko’s lawyer Ilya Novikov, that Nadiya Savchenko enjoys international immunity as a member of the Parliamentary Assembly of the Council of Europe [PACE] and her prosecution in Russia is therefore illegal.

It is totally unlawful for other reasons including the fact that she was taken prisoner by Kremlin-backed militants in Ukraine almost exactly a year ago, and taken to Russia against her will.

The investigator’s argument for her extended detention was that Savchenko and her lawyers need time to read the material.  In fact, this is supposed to be concluded next week, and Savchenko has already gone through 27 of the 38 volumes of the ‘case’ brought against her by Russia. While agreeing with her mother that she could just scribble “lies!” on each page of the material, the imprisoned former military pilot and Ukrainian MP told human rights activist Zoya Svetova that she must study it.

Not that there’s anything to study, she adds, saying that thus far she has found no testimony from the Kremlin-backed militants who took her prisoner on June 17, 2014.  There is also nothing from any witnesses of her on a television tower from which she is supposed to have been following the movements of the two journalists killed on June 17 in mortar fire.

The investigators have come up instead with “nonsensical” testimony from a priest who claims that she wanted to “hand over prisoners for their body organs” as well as with witnesses who saw her in captivity.

It is significant, though unsurprising, that there is no testimony from the militants who captured her, since they would then have to explain why they supposedly released her.  The final version of the indictment, after all, claims that:  “Immediately after the military encounter Savchenko was captured by insurgents of the self-proclaimed Luhansk people’s republic, after which she was released and between 15.30 and 17.00 on 23.06.2014, in violation of the established procedure for entry to the Russian Federation, she illegally crossed the State border of the Russian Federation”.

That she would have needed to sprint some 75 kilometres to do this is only one of the problems with this absurd claim.  As reported earlier, the charge of crossing the border illegally was first threatened back in October 2014, but only formally laid during the 24 hours given in a Parliamentary Assembly of the Council of Europe resolution on Jan 28, 2015 which demanded that Russia release the Ukrainian MP and PACE member.

Savchenko has insisted from the outset that she was taken to Russia by force, in handcuffs and with a bag over her head.  She told Svetova that when she was taken to a hotel in Voronezh, a Russian investigator began interrogating her, purportedly as a witness.  He told her to write a request to the Federal Migration Service [FMS] for a document confirming her identity which she did.  The file now contains the testimony of an FMS official who claims that she appeared in person asking for the document. “I couldn’t come anywhere: I was forcibly taken to Russia from Ukrainian territory, and I could hardly have left the hotel since I was held there under guard”.

No trial by jury

A change in Russian law means that Savchenko will not have the right to trial by jury.  The change was back in 2013 and linked with the abolition of life sentences for convicted women murderers making Svetova’s suggestion that planned changes to the law on juries would be to prevent trial by jury in Savchenko’s case implausible.  When asked by Svetova why she thought Moscow wouldn’t want her tried by jury, Savchenko answered that nobody believes in her guilt, and that she suspects a jury would acquit her.

The possibility that a jury would provide the justice so overtly lacking in this case was effectively confirmed by the jury verdict last week in the illegal trial of Crimean Tatar leader Mustafa Dzhemiliev’s son Khaiser.  As reported, the jury found – as had a legal Ukrainian court – that Khaiser Dzhemiliev was not guilty, as the Russian prosecutor had claimed, of murder, but of manslaughter.  It is telling that the prosecutor then went on to demand a sentence over twice the length envisaged by Russian law for the charge of manslaughter.

In a recent interview, Ilya Novikov, one of Savchenko’s lawyers, told Novaya Gazeta that the investigators have significantly accelerated the proceedings. He believes that the Russian authorities want a court sentence as soon as possible in order to then begin negotiations for her release.  Mere conviction is “enough” for internal consumption, he explains, while pressure from the West for her release can only increase as long as she remains imprisoned.

He says that the sentence could easily be 13-16 years, but stresses that this need have no impact on when Savchenko gets back to Ukraine.  When she is released depends on decisions made in the Kremlin, not in the court, and the defence therefore does not plan to concentrate on getting a reduction in any sentence imposed.  They aim simply to demonstrate to the entire world that “the court was biased, the defence’s evidence more confidence and that the prosecution had no proof”.  Or, as Novikov puts it most succinctly: “Our task is to turn the underwear inside out with the shit exposed”.

Novikov explains that the ‘case’ against Savchenko emerged out of a much more grandiose undertaking, one linked directly with Russia’s undeclared war against Ukraine.  A special unit within the Russian Investigative Committee was set up as the military conflict began in Donbas.  This was supposedly to investigate crimes linked with use of prohibited means and methods of war, but has effectively served as a propaganda weapon for claiming that Ukraine is carrying out ‘punitive operations’ against the population and committing ‘war crimes’.

Until April 24, the prosecution of Savchenko was part of that global case in which militants, refugees, prisoners, etc. are interrogated.  This explains the extraordinary assertion that 108 thousand people were questioned in the Savchenko case.

The Savchenko case was separated from this general ‘investigation’ on April 24, which appears to have coincided with the sharp acceleration into the case.  As well as the charge of illegally crossing the border, she is accused of abetting in the killing of two people “out of political hatred”, and of attempting, as part of a group, to kill two or more people out of the same political hatred.

There is not, and never was, any evidence that the journalists who died on June 17 – Igor Kornelyuk and Anton Voloshin – were deliberately killed, however Russia’s Foreign Ministry and pro-Kremlin media began pushing the line that the journalists had been targeted as journalists “telling the truth” about the conflict in Donbas that very same evening.   The investigators’ only concession to common sense has been their decision to quietly shelve this nonsense.

The investigators do, however, assert that on the morning of June 17, Savchenko climbed a telephone tower, and from 150 metres up, at a distance of 3.5 kilometres used binoculars which were not found to follow the movement of civilians at the checkpoint near Metalist.  Then with some also unidentified equipment she is accused of having informed comrades of the whereabouts of the journalists and others with them.  Novikov earlier called this “deranged nonsense” and pointed out that the defence has already fully established what Savchenko was doing that morning.

The courts have thus far ignored the most compelling evidence that Savchenko had already been captured by the militants when the men were killed; that she could not have obtained the relevant information and that the detention and trial of a person captured in Ukraine and taken by force to Russia are flagrant breaches of domestic and international law.

It is tragically clear that they are willing to ignore anything except the orders coming from the Kremlin.  In the meanwhile Nadiya Savchenko remains imprisoned in Moscow, longing for this “damned trial” to begin.

One of the ways she spends her time is in making origami figures.  Among the huge number of letters she receives was one from some Russians planning to rescue a child with cerebral palsy from a children’s home.  Her Pinocchio story figures are for that young child, though she doesn’t know if she’ll be able to get them out.