BORN in the Kremlin? Russian ultranationalist trial and links with Ukraine 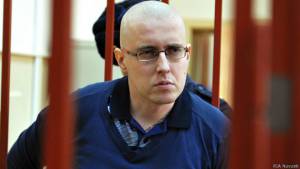 Allegations have once again been made of strong links between the Kremlin and the neo-Nazi organization BORN [Militant Organization of Russian Nationalists], responsible for at least 10 killings, including that of human rights lawyer Stanislav Markelov.  The accusations made by members of BORN are, of course, denied by President Vladimir Putin’s press secretary Dmitry Peskov, but then, what has Peskov not categorically denied since Feb 2014?   Whether or not the specific allegations regarding one person now on trial are true, they are certainly highlighting longstanding links between Russian ultranationalists, the war in Donbas and the Kremlin.

In Moscow the trial is underway of Ilya Goryachev who is accused of forming and running a criminal gang (BORN); masterminding, though not directly taking part, in at least 5 murders and other crimes for which he faces a life sentence if convicted.  Goryachev denies the charges.

Goryachev gave testimony against BORN leader Nikita Tikhonov and his partner Yevgenia Khasis in 2011, later saying that this was under FSB pressure.  Tikhonov is now serving a life sentence, Khasis – 18 years, for the murder of Stanislav Markelov and Novaya Gazeta journalist Anastasia Baburova.  Since the story that Tikhonov and Khasis have now repeated at least twice incriminates Goryachev, as well as the Kremlin, a revenge motive has been claimed by Goryachev’s defence. Tikhonov denies this, saying that he had previously shielded Goryachev, but became “disillusioned” after the latter twice failed him and in the light of information suggesting that some of the people they were encouraged to kill, including Stanislav Markelov, were innocent victims.

Tikhonov dates the origins of BORN to 2007 when he turned to Goryachev for help while hiding in Ukraine from prosecution on charges of killing a member of the anti-fa (anti-fascist) movement in 2005.  Goryachev told him that he had contacts in the President’s administration.  In testimony first given in 2012,   Tikhonov said that he had asked Goryachev whether these contacts could be paid.  Goryachev allegedly answered that the officials were interested in political services, not money.

Goryachev was then the leader of the far-right organization Russian Image [Russky Obraz], and according to Tikhonov, suggested that the latter head a militant wing of Russian Image which would be overseen by the Kremlin.

He claims that he agreed, believing it to be the only way he could return safely.  On his arrival in Moscow, he alleges that Goryachev gave him a list of specific leaders of the anti-fa movement together with their addresses.  Words like hit-list were never spoken between them, but this, Tikhonov claims, was the beginning of BORN which was the illegal wing of Russian Image, much like the Irish Republican Army and its legal face - Sinn Fein.  BORN was responsible for at least 10 murders, which included members of the anti-fa movement, Markelov and Baburova and Judge Edward Chuvasov who had jailed a number of neo-Nazi skinheads for hate killings.

A list would seem to have been found since Goryachev has given another version of why it was drawn up.  He claims that in 2007 Alexei Mitryushin, former functionary of the pro-Putin movements ‘Nashi’ and later ‘Mestniye’ [analogous to Nashi, but for the Moscow region], commissioned a lecture on the activities of left-wing radicals in Russia.  Goryachev says that he carried out the work for payment, and that it was for this that he gathered information about Markelov and Anti-fa leaders (all later murdered).  It is not clear how he explains the need for the left-wing individuals’ addresses. 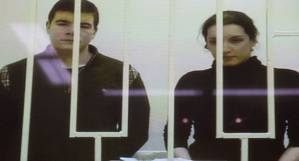 Both Tikhonov and Khasis mention Leonid Simulin as the person whom Goryachev called a person from the President’s Administration answering for contacts and help for Russian Image.

During the hearing on June 9, Tikhonov also mentioned other people – Nikita Ivanov, answering for work with pro-Kremlin youth movements and Pavel Karpov, who seems to have worked with the Administration on nationalist movements. Both Simulin and Karpov have since held posts in the so-called Luhansk people’s republic.   Tikhonov asserts that Goryachev most often spoke of Simulin and the above-mentioned Alexei Mitryushin, but that in general Tikhonov treated such contacts as Goryachev’s business, while he concentrated on the violent actions.

It was after the highly-publicised murder of Stanislav Markelov – who was also representing the family of the young Chechen woman raped and murdered by army colonel Yury Budanov – that the police began following neo-Nazi links and planted bugs in Tikhonov and Khasis’ home.

As well as denying any connection with the President’s Administration, Peskov also claims that it is for the prosecutor and court to decide whether Surkov should be summoned for questioning.  The presiding judge in the Goryachev trial – Pavel Melekhin – took time out on June 10 to extend Nadiya Savchenko’s detension to 15 months –  a ruling, involving flagrant infringement of procedure and international law, that few would believe he passed without orders from above.

Tikhonov’s interrogation is due to continue on Monday, June 15.  Mark Feygin, who is representing Goryachev, says that they will demand that all those whom Tikhonov names be summoned for questioning.

Ilya Goryachev himself writes that he developed his movement Russian Image in Ukraine, with it being officially registered in Makiyivka.  Anna Hrytsenko has followed many of the Ukrainian leads among the above-mentioned players, including a couple of Russian nationalists now linked with the controversial Ukrainian volunteer battalion Azov.

The “community of patriots” Goryachev mentions appears to be the organization ‘Donetsk Republic’ which was supported by many of those pro-Russian far-right activists who later played a role in the seizure of control in Donetsk oblast cities and the self-proclaimed ‘Donetsk people’s republic’ [‘DPR’].

In a poignantly prescient article back in April 2013 entitled “The Police and Russian fascism: who’s serving whom?”, the (then) Donetsk-based Ostro described an attack on the Isolation Cultural Centre from ‘Donetsk Republic’ members including Andrei Purgin and Oleg Frolov, who are now prominent in ‘DPR’, Alexei Matyushkin and other members of Russian Image which Ostro calls a fascist organization.  The cultural centre was seized after Kremlin-backed militants took control of Donetsk.

Ostro notes that the same people involved in ‘Donetsk Republic’ were previously active in the Eurasian Youth Union, founded by the Russian fascist ideologue with contacts in high places Alexander Dugin.  Members of the ‘Donetsk Republic’  - including Purgin and Frolov - were taken to training and indoctrination camps in Russia which leading far-right research Anton Shekhovtsov says were formed at the initiative of both Dugin and Vladislav Surkov, then deputy head of Putin’s Administration, using Administration money.

Hrytsenko writes that after Tikhonov and Khasin’s trial Simulin disappeared for some time.  He emerged shortly after Goryachev’s arrest in May 2013 -  on TV, no less, in an interview taken by Alexander Borodai, in which he denied any allegations of illicit contacts, influence, etc.

It is noticeable how any account of Russian far-right / neo-Nazi nationalist activities proves suitable for a ‘who’s who’ on the militants in Donbas.  Borodai within a year was serving as ‘DPR prime minister’, while Simulin also held a top post in the so-called ‘Luhansk people’s republic’.

The ideologues, as well as some prominent members of the neo-Nazi Russian National Unity party headed by Alexander Barkashov, Dugin’s Eurasia Party and Eurasian Youth Movement; Edward Limonov’s National Bolshevik party and Black Hundred have either themselves been actively involved in the fighting in Donbas or enlisted others to take part.  Pavel Gubarev, one of the leaders of the Donetsk militants from the outset is known for his roots in the Russian National Unity party.  His aide,  Alexander Proselkov, shot and killed on July 31 by the militants’ own security guards, was a Russian national and member of  the neo-fascist International Eurasia Movement and Eurasian Youth Union, both closely linked to Dugin.

Gubarev was arrested this week, one of a number of moves which followed soon after two reported visits to Donbas by Vladislav Surkov, now presidential aide.

Simulin has never been questioned about his contacts with Goryachev and Tikhonov, and it is by no means clear that a Russian court will agree to have him, or others implicated in this case summoned for questioning. 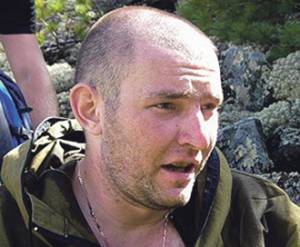 Even if the allegations made by Tikhonov and Khasis are exaggerated or false and there was no direct cooperation between Russian Picture and BORN, the description given by Novaya Gazeta is damning enough.  It writes that “Ilya Goryachev and his Russian Picture were long considered a virtually “Kremlin project”, started as part of the “managed nationalism” programme.

Like its ‘managed democracy’, the Kremlin’s flirtation with neo-Nazi and fascist nationalist ideologues and organizations has been at very least irresponsible, with the primitive violence and destruction unleashed seen most tragically in eastern Ukraine.