Poet labelled ‘terrorist’, flung off Wikipedia for verse in support of Ukraine 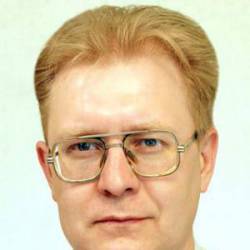 Alexander Byvshev, the Russian poet dismissed from his teaching job and on trial for a poem against Russia’s annexation of Crimea, has now been added to Russia’s List of Terrorists and Extremists.  Russian Wikipedia has also demonstrated the same contempt for the presumption of innocence and deleted their entry on the poet.

In reporting his inclusion in Russia’s ever-expanding register of people claimed to be ‘terrorists’ or ‘extremists’, Byvshev comments that in that way his poems “in their destructive force” have at official level been likened to a Kalashnikov rifle or explosive.

Anybody believing that this form of attention is better than not being read at all should think again.  The consequences of being placed (no. 830) on the Federal Financial Monitoring Service’s List of Terrorists and Extremists are severe, especially for a person whose poems have already cost him his job as a secondary school German teacher in Kromy, a town in the Oryol oblast.  All Byvshev’s accounts have been frozen, without any warning, including the one from which he received a small State benefit because Kromy is within the contamination area from the Chornobyl Nuclear Power Station Disaster.

The criminal charges against Byvshev are over the poem – “To Ukrainian patriots” [recent reports mention another poem as well “Ukrainian insurgents”, with this possibly added later).  The poem addressed to Ukrainian patriots was posted on Byvshev’s social network VKontakte page soon after Russia’s invasion and annexation of Crimea.  The poem, which is widely blocked in Russia, expresses vehement opposition to Russia’s invasion and suggests Ukrainians should ensure that not one inch of Crimea is handed “to Putin’s chekists”.

In May criminal proceedings were brought against him for allegedly “stirring up hatred or enmity, as well as denigrating human dignity” (Article 282 § 1 of the Criminal Code).  If convicted, he could face a four-year term of imprisonment.  At the time the Sova Centre reported that shortly after the poem was posted, Byvshev became the target of a hate campaign.  An article published in a local paper under the title “There is no place for such patriots in Russia” was totally in the style of the Stalinist fight against cosmopolitanism, the Sova Centre notes. 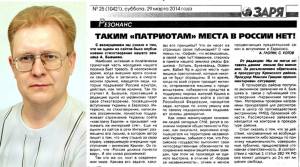 As reported earlier, a Novaya gazeta journalist was at one of the first hearings and wrote that it was the head of Byvshev’s school, Ludmila Agoshkova who ‘reported’ the poet to the prosecutor’s office.  In court she explained that “a Crimean patriot” had sent her the above-mentioned poem asking how such a person could be working in a school.  The prosecutor’s office was informed and the deputy prosecutor present at a teachers’ meeting which pulled the poem to pieces.  Agoshkova claims that all the teachers criticized the poem, with none supporting its author.

Neither Agoshkova nor any of the 43 witnesses, mainly teachers, who had at the beginning of April 2015 could remember anything of the poem that they were all so indignant about (another echo from Soviet days).  Agoshkova’s opinion, which she claimed to be shared by her staff, was that “this poem is anti-Russian”.

The case was ‘backed’ by a linguistic assessment carried out at the initiative of the Russian Centre for Countering Extremism. Ludmila Vlasova from the Oryol State University concluded that “the hostile nature of the statements related to Russians in the poem is expressed in expressions regarding Russian state bodies and President Putin (“not one inch of Crimea to Putin’s chekists”).”  She asserted that they contain direct and covert calls to Ukrainian patriots to carry out physical and other actions in relation to the enemy – Russians:  to meet the enemies like their ancestors did; to prepare and hold weapons in readiness, etc.  This, she claimed, meant that the poem “To Ukrainian Patriots” contains statements which denigrate Russians.

The Sova Centre, which monitors and analyses hate speech, disagreed.  It pointed out that the hostile attitude in the poem was not to Russians as an ethnic group, but to a form of activity.

A recent assessment from the Kyiv Institute of Linguistics was rather more blunt, explaining that the term “moskal” and the words “band of moskali” in Byvshev’s poem referred only to Russian soldiers on Crimean territory, and was not being used (as it can be) as a denigrating term for Russians generally.

Judge Margarita Gridina rejected the application by Byvshev’s lawyer to have the Kyiv assessment added to the case, claiming that the above-mentioned assessment by Vlasova was sufficient.  Vlasova was commissioned by Russia’s Investigative Committee and her conclusion that Byvshev’s poems arouse hatred and enmity towards Russians is that pushed by the prosecutor.

That decision by the judge, as well as the fact that Byvshev has now been declared a ‘terrorist or extremist’, are ominous signs in the prosecution of a poet who dared to express his strong opposition to Russia’s invasion and annexation of Ukrainian territory.