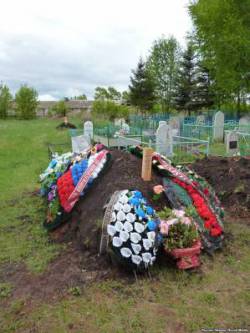 One of the graves of soldiers killed in Ukraine, found by Ruslan Leviev and Vadim Korovin

Nine Russian human rights activists and journalists have lodged an appeal with the Russian Supreme Court prompted by President Vladimir Putin’s decree classifying information about military losses in peacetime as ‘state secret’.  Putin’s May 28 decree is widely seen as linked with Russia’s military engagement in Ukraine and the applicants include Lev Schlosberg, one of the first people to reveal information about Russian paratroopers killed in Ukraine and others directly targeted by this decree.

Human rights lawyer Ivan Pavlov says that the link with the situation in Ukraine is obvious, as is the aim of the decree, that being to prevent any attempts to provide objective coverage of the conflict.

The decree is legally dubious since Putin has extended the amount of information to be deemed state secret via a presidential decree, whereas such information can only be classified as secret through a federal law.  Pavlov notes that, in fact, the problem predates this current decree.  20 years ago, at the beginning of the war in Chechnya, the then President Boris Yeltsin also used a decree to classify information about losses in wartime.  This was also unlawful, but the need to dispute it was less urgent since no war was declared during the period since then.

The situation is now different since Russia is denying involvement in Ukraine and there is no clarity as to what ‘special operations’ refer to.  The applicants are now forced to challenge both Yeltsin’s 1995 decree and Putin’s decree from May 28, 2015.

The application sets out two arguments.

A decree is not a law

Both presidents exceeded their powers in classifying information about losses, whether in war or peacetime.  Russia’s Constitution stipulates that citizens’ right to freely seek, receive and circulate information can only be restricted by federal law.

Article 5 of the Law on State Secrets gives a comprehensive list of the information which may be classified.  It includes some obviously sensitive military information, regarding military plans, deployment, etc.  There is no mention of military losses.  The Law on State Secrets does not give the President the power to extend the range of state secrets, and a decree is not a law.  Article 9 of the same Law stipulates only that the President should, on the basis of Article 5, approve a List of information deemed to be state secret, stipulating the bodies given the authority to ensure that the information is duly classified.

Article 7 of the Law on State Secrets clearly stipulates information which may not be classified. This is “information about emergencies [lit: exceptional events] and catastrophes, jeopardizing citizens’ safety and health, and their consequences”.

Pavlov points out that “military action and special operations which involve human losses must undoubtedly be considered exceptional events.  We think the relatives of servicemen will agree with us”.

As mentioned, Putin’s decree is vague, with no definition of special operations.  This means, Pavlov notes, that journalists working in areas of conflict have no way of knowing where the dividing line falls between freely available information and state secrets.  They could end up prosecuted for quite accidental divulgence of ‘state secrets’, as per somebody’s interpretation of the decree.

A number of the applicants are journalists now reporting for the few remaining Russian independent media, such as Novaya Gazeta (Kanygin) and TV Dozhd (Olevsky).   Leviev is a blogger who has recently exposed vital information about the death of three Russian soldiers in Ukraine.

Pasko, also a journalist, spent several years in Russian prison and was an Amnesty International prisoner of conscience for revealing information about  environmental problems in the Japanese Sea which Russia’s security service [FSB] claimed was ‘espionage’.

Svetlana Davydova from Vyazma, in the Smolensk oblast, was arrested on Jan 21, accused of ‘state treason’ over a phone call she made to the Ukrainian embassy warning of Russian soldiers from her area whom she believed were being sent to Ukraine.  The mother of 7, who was still breastfeeding her infant daughter, was taken alone to Moscow and remanded in custody.  She was released only after the case gained publicity and after Ivan Pavlov was taken on to defend her, replacing a ‘lawyer’ who saw his role as advising her to ‘confess’.  Asked later, Davydova said that even if she’d known what it would lead to, she would have still made the phone call.

Pavlov has been systematically prevented ever since from seeing another client, 73-year-old Ukrainian Yury Soloshenko who has been held in Russian detention since August last year on some kind of mysterious ‘spying’ charges.

Lev Schlosberg has also unwaveringly upheld Russians’ right to know about Russia’s deadly and undeclared war in Ukraine.  The Pskov journalist and politician who first revealed the deaths of probably most of a Pskov paratrooper regiment in Ukraine last August was brutally attacked shortly after that disclosure, and he has been the target of overt defamation on pro-Kremlin television channels.

Putin’s decree coincided with publication by the Open Society Foundation of the English version of the original report Putin. War.  The report was put together by associates of slain politician Boris Nemtsov who had been investigating Russian military deaths in Ukraine when he was gunned down near the Kremlin on Feb 27.  One of its authors Vladimir Kara-Murza was shortly afterwards taken ill and was in a critical condition for around weeks.  His father and friends are convinced that the journalist and politician was poisoned.

It takes great courage in Russia these days to reveal information the Kremlin wants concealed, and respect is due to the nine Russians who have dared to cry foul over Putin’s decree.