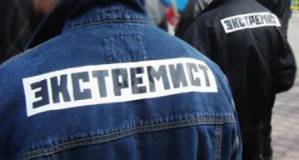 Yet another anonymous Crimean is facing criminal charges on unclear charges in Russian-occupied Crimea, this time a teenager.  The only information thus far available comes from the Investigative Committee’s Department for investigating especially important cases which reports that the 17-year-old is suspected of a crime under Article 282 § 1 (inciting hatred or enmity towards a social group with the use of the mass media).

“According to the investigators, from June 2014 to May 2015 the suspect placed text messages, photos and audio-visual recordings of an extremist nature on his page on one of the social networks.”

The only other information as such is that the criminal case is on the basis of material from the Centre for Countering Extremism.

Olha Skrypnyk, Deputy Head of the Crimean Human Rights Field Mission points out that the Crimean prosecutor and Russian Investigative Committee have published a number of such vague reports recently about unnamed individuals with these usually about alleged ‘terrorism’ or ‘extremism’.  She asks that anybody knowing more details, including whether a lawyer is needed, make contact.

At the beginning of May the arrest was reported of an alleged member of the Ukrainian ‘Azov’ volunteer Battalion.  A month later the person (seemingly a 21-year-old) remained entirely anonymous, but the list of the offences he was claimed to have committed already included attacks on both a synagogue and mosque, attempts to cause provocation around the anniversary of the Deportation of the Crimean Tatar People, and an attempted terrorist attack on the prosecutor’s office.  The said offences covered a period of over one year, and it was quite unclear how the young man was supposed to have committed them all while also finding time to fight in Donbas.  As reported, scepticism over attempts to pin an act of anti-Semitic vandalism carried out within 24 hours of Russian soldiers seizing control in Simferopol on this anonymous person was expressed by Vyacheslav Likhachev, long-term researcher and monitor of anti-Semitism in Ukraine.

The anonymity makes it impossible to ascertain whether the detainees’ rights are being observed.  In a number of cases involving Ukrainians in Russia and in Crimea, the only lawyers present have been provided by the investigators, and there are strong grounds for concern about the level of legal defence given the detainees.

The number of warnings issued and armed searches carried out over alleged ‘extremism’ since Russian annexed Crimea make it difficult to feel optimism about the grounds for any new anonymous criminal proceedings.