Rigged and Secretive Fight against Corruption?Government accused of rigging anti-corruption selection commissionHead of Traffic Police Dismissed after Scandalous Lifestyle ExposedIt’s Tax Time In Ukraine, And Financial Discrepancies Suggest Corruption EnduresBehind the declarations: how public officials lived – and live nowParliamentarians’ secrecy regarding income given judicial OKVerkhovna Rada and Constitutional Court least willing to divulge public informationCourt rejects Verkhovna Rada claim that staffing details are not for the publicOPORA takes secretive Verkhovna Rada Office to courtCHESNO: Office of the Verkhovna Rada flagrantly violating Public Information ActUkrainska Pravda takes parliament to court over concealed informationResidences of Azarov, Lytvyn and Yushchenko to cost the taxpayer 50 million UAHCourt has no problem with parliament not handing over MP’s declarationsVerkhovna Rada Office refuses to hand over Deputies’ declarationsPublic Information Law like a Bolt from the Blue for the AuthoritiesCVU: Ukrainian authorities not ready to be openFirst legal proceedings over alleged infringement of Public Information LawStop Censorship will force Deputies to make their income declarations publicThe Public are most interested in how public funding is spentLaw on Access to Public Information: comes into effect
• Topics / Access to information

Journalists under investigation for divulging judges’ rulings from foreign beaches 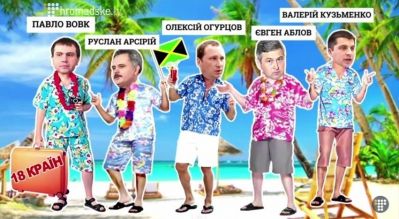 A recent report on holidays abroad taken by Kyiv judges and on rulings some of them appear to have ‘issued’ while far from Ukraine has provoked reaction from the Prosecutor General’s Office.  Not, however, the one you might expect with a criminal investigation launched over supposed “divulgence of information on special access”.

Investigative journalist and presenter of the programme Dmytro Hnap reported on June 17 that he had been summoned for questioning “for the moment as a witness”. He writes on his Facebook page that the judges whose holidays were discussed in the programme “took offence at the report and lodged a complaint with the Prosecutor General’s Office”.

There was undoubtedly a lot that the judges can’t have wanted revealed in the programme on Slidstvo.info [Investigation.info] entitled “Beach Control”.  Gnap begins by explaining that they have already looked into the “sumptuous lifestyle” of Ukrainian judges, which is quite out of the reach of most Ukrainians, and the judges’ numerous properties and bank accounts with millions.  They round off their investigation by looking at where the judges relax, with details about the considerable number of holidays abroad, including to beach resorts, that certain judges from the Kyiv District Administrative Court went on.  Pavlo Vovk, Head of the Court, was reported to have visited 18 countries in the past 4 years, some of them more than once.

The journalists discovered that “some judges like warm sea so much that they manage to issue their rulings literally on the beach”,

Ruslan Arsyriy was alleged to have ‘passed’ several rulings while outside the country.  The programme explains how Arsyriy, together with judges Oleksiy Ohurtsov and Ihor Pohribnichenko, issued a ruling preventing the state from reclaiming 20 gas fields received by the firm Golden Derrik during the presidency of Viktor Yanukovych.  The report asserts that Golden Derrik is controlled by two people close to Yanukovych – former energy minister Edward Stavitsky and ex-minister of agriculture Mykhailo Prysyazhnyuk.

Reaction to such revelations certainly seems warranted, only not this one.  According to Hnap, in response to a complaint from the judges, the Prosecutor General’s Office has launched a criminal investigation over “divulgence of information on special access. That is connected with the journal listing the trips by judges abroad. We received a copy of that journal since it turned out that during their trips the judges were issuing verdicts. And now, as old friends, seemingly, the PGO has launched an investigation for them so that we don’t poke our noses where we shouldn’t”.

Judges in Ukraine do not – officially – earn a lot, and a lifestyle involving frequent holidays in expensive resorts all over the world raises legitimate questions.  Such questions about any public officials, judges etc. were inevitably blocked by courts under Yanukovych, with information of clear public importance being deemed ‘confidential’ or ‘personal data’.

RFEL journalist Katya Gorchinskaya recently scrutinized some of the District Administrative Court judges’ declarations and found that the judges’ families appeared to be swimming in ‘windfalls’.  The family of the head of the Court, Pavlo Vovk declared 400 thousand UAH in “gifts, prizes and winnings” in 2014, double Vovk’s annual salary.  Vovk told RFEL that information about his family’s income was “confidential” and that his family did not agree to release it.

Stop there.  As Gorchinskaya points out, tax declarations of all public servants are public information.

It has been jealously guarded and concealed information, and never really subjected to formal checks.  This is due to change with the formation and running of a National Anti-Corruption Agency.  That is the theory, at least, since there has already been scandal with anti-corruption watchdogs accusing the Prime Minister Arseny Yatsenyuk and certain members of the government of using dodgy methods to appoint their people to the selection commission responsible for staffing the agency.

That may be one way of trying to temper the unpleasantness caused by the public wanting to know about glaring discrepancies between official earnings and actual income and jet-setter lifestyle.

Another, equally unacceptable, is initiating criminal investigations when journalists reveal what the public has every right to know.