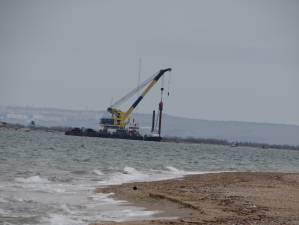 Russian legislators look set to pass a bill which effectively bypasses environmental impact analyses and public  hearings in order to fast-track construction of a bridge across the Kerch Strait linking Crimea with Russia.   Construction of the planned 19-kilometre bridge in an area of seismic activity will undoubtedly bring in vast wealth for Vladimir Putin’s oligarch friend, Arkady Rotenberg.  Whether it remains standing and what the environmental ramifications for the region are will be discovered later.

The bill was hastily tabled by deputies from the ruling United Russia party and passed by the profile committee in the last two weeks.  It was adopted in its first reading on June 17 and the same fast-track procedure is clearly planned for its final adoption.

Russian law is basically being rewritten in the same way that it was to accelerate construction for the Sochi Olympics, with the same disregard for safety and the likely consequences for the area.

Darya Gorstkina writes that the bill makes it possible for the bridge to be designed and built simultaneously.  A seemingly undefined amount of preparatory work on building infrastructure is to be allowed before permits have been issued.

In fact, such preparatory work began back in May, after the contract for building the bridge was awarded at the end of January 2015 to the SGM Group owned by Arkady Rotenberg, a friend of Russian President Vladimir Putin.  This is not the first time that Rotenberg has received highly lucrative contracts, with he and his brother reported to have increased their personal wealth by $2.5 billion over contracts for the Sochi Olympics and state-controlled Gazprom.  Dmitry Shevchenko, deputy coordinator for Environmental Watch on the North Caucuses, calls the contract a “consolation prize” to make up for Rotenberg’s having come under western sanctions and had property arrested in Italy.

All preparatory work already done will be legalized by the bill once it’s passed with this requiring only that the paperwork is later submitted.

The draft law states that permits should be issued within 15 days for building on land under environmental protection, however if it is not and no criticism has been received, the permits are understood as having been given.  The message to all regulatory bodies seems quite clear:  they should relax and just sign where needed, with it immaterial whether the signatures on ‘permits’ come before the construction, or post-fact.

Shevchenko calls the efforts by the State Duma to push through this law totally unacceptable.  He says that the bill effectively does away with environmental impact analyses for construction of a huge engineering project which could cause major damage to the environment and disrupt the water flow of the Black Sea and Azov Sea.

Environmental Watch sounded the alarm as soon as construction began in early May.  Shevchenko and his colleagues specially visited the area, together with a Novaya Gazeta journalist.  He writes that he expects this latest mega-project in Krasnodar region (one end of the planned bridge) to exactly repeat the Sochi Olympic scenario beginning with the dividing up of contracts between “our guys” and ending with the total contempt demonstrated by those same “guys” to Russian laws and Russian citizens.  He was, however, staggered in May when they got to the Temryuk district of Krasnodar to find “that they’ve totally brazenly, without any permits, environmental impact analyses or design subtleties begun burying in the ground 6 billion dollars that in conditions of Russia’s crumbling socio-economic sphere they apparently couldn’t find better use for”.

The expedition was met then by aggressive guards, and Shevchenko predicted that there would probably be men with machine guns waiting for them next time.  By mid-June the area had indeed been closed off and an armed guard posted.

Environmental Watch warns of major problems with construction of the bridge, linked, for example, with poor soil and heightened seismic activity in the region.  There are often earthquakes and mud slides in the area, heightening the need for additional measures to strengthen the bridge.   The environmentalists warn of irreversible consequences for the flora and fauna in the place where the Azov and Black Seas merge.

The environmental costs of the Sochi Olympics were ignored and all seems in place for a repetition here.  Rotenberg’s ‘consolation prize’ certainly looks set to be a winner in financial terms.  Shevchenko notes that the longest possible bridge involving the most complicated structure from the engineering point of view, thus clearly being the most expensive of all variants has been chosen, with the bridge running along the Tuzla Spit and then reaching Crimea around Kerch.

The Russian pro-Kremlin media can be relied on to present the accelerated project in the most positive light, with none of the details about the environmental and economic costs mentioned.  For the Kremlin there are obvious PR benefits in trying to prove that “Crimea is ours”   Efforts to present the plan to use only Russian material for the project is being presented in a patriotic light, although it is rather a matter of brutal necessity given the international sanctions in place since Russia’s invasion and annexation of Crimea.

One other money saver is worth mentioning.  No Russian insurer is in a position to take on the risk of this project, and no western insurer would be likely to take it on, given the international sanctions in place and the clear breach involved of Ukrainian law and Ukrainian waters.  Insurers would also have demanded that environmental impact documentation was in order.

The rampant damage to the environment and destruction of people’s lives wrought by the Sochi Olympics were largely ignored by the West.  This new act of environmental banditry has the widest implications and needs attention now.