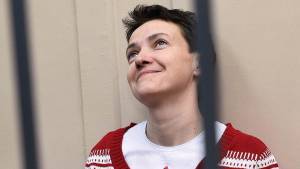 The defence has begun posting the case material against Nadiya Savchenko, captured by Kremlin-backed militants in eastern Ukraine and now on trial in Russia.  Appropriately enough they begin with the testimony of Igor Plotnytsky, now head of the so-called ‘Luhansk people’s republic’ and identified by Savchenko as one of the men who took her prisoner on June 17, 2014.  His testimony leaves critical questions unanswered, however none is picked up by the investigators who ask only two questions  – whether Russians are involved in the military conflict and whether the militants are receiving arms from Russia.  Unsurprisingly, Plotnytsky says no to both questions.

Russia is claiming that Savchenko acted as a spotter directing the shelling by Ukrainian soldiers in which two Russian journalists – Igor Kornelyuk and Anton Voloshin – died on June 17.  The key problem in the investigators’ case is Savchenko’s irrefutable alibi however there are also a number of other obvious flaws in their version which do not go away despite being assiduously ignored.

Ilya Novikov, one of Savchenko’s lawyers explains that the defence had long been intrigued as to why the prosecution’s new version has Savchenko observing the Metallist checkpoint (near which Kornelyuk and Voloshin were killed) from a satellite communications tower.  It turns out, he continues, to have been as a result of “scientific deduction”.  The investigators asked for an expert opinion as to where in that vicinity one could observe the checkpoint.  It was after they were told where that the investigators suddenly knew which tower to allege that Savchenko climbed.  Novikov points out that at the beginning, the investigators had a totally different version based on ‘evidence’ which was demonstrated to be invalid.

The investigators were so delighted to have found a tower with the correct visibility that they chose to disregard other inconvenient details such as the fact that the said tower was in the militants’ rear.  Not to mention why, in the middle of fierce fighting between militants and Ukrainian forces, the latter should have been interested in spotting and shelling civilians.  There was also an experiment carried out in the Moscow region, with a person who climbed up on the tower and looked out effectively unable to see anything (at a distance of 3 and a half kilometres!)

All in all, Novikov notes, the tower only increases the Russian investigators’ problems since it heightens time discrepancies.

The defence has telephone records and witness testimony confirming that Savchenko was captured around 10 a.m.  The shelling took place around 11.40, and she would have needed to climb down from the tower and make her way back on foot.

This, he says, is why the militants who were questioned, all obligingly claim to “not remember exactly” when Savchenko was captured, but say it was between 12-13.  From the defence’s point of view, that’s perfect since it’s so easy to disprove.

Considering the very large number of subjects on which Plotnytsky couldn’t ‘exactly remember’, he proved remarkably specific in describing the binoculars.  He claims they were black army B7 binoculars without a case but with a strap, and a serial number and model name on the left side. He also mentions a radio device (like a walkie-talkie) which was not listed the first time.  He mentioned it for the first time in May, asserting that it was in a black box with a display screen and a panel with keys to press.  “The said items were placed in the weapons room of the Zarya Battalion and later given to one of the fighters. I can’t explain who exactly the binoculars and walkie-talkie were given to, ”.  He doesn’t try to explain either why it required a second trip to Russia and questioning for him to ’remember’ the walkie-talkie at all.

It would take too long to list all the implausible elements in Plotnytsky’s testimony.  He claims, for example, that he learned of the journalists’ death after questioning Savchenko once, and decided to question her again.  There is no evidence of this interrogation, nor any explanation in that case why the battalion allegedly released her.  He claims that they had taken several people prisoner, but since the militants had obtained all the information they needed and had problems with food supplies, they decided to give these prisoners "the necessary medical assistance and release them”  For some reason he immediately gives another reason (the lack of a separate room for women prisoners) why they supposedly decided to release Savchenko.  Not only were the militants magnanimous enough to release Savchenko and the other prisoners, but they were even so concerned not to risk their life and health, that they decided to transport them to a safe place away from the fighting.  Plotnytsky asserts that he learned of her arrest in Russia from the media.

Savchenko is adamant that the militants took her by force to Russia where she was held several days and interrogated before being formally detained.

The day after the Parliamentary Assembly of the Council of Europe demanded that Russia release Savchenko who is now a Ukrainian MP and PACE delegate, the Russian investigators announced that she was now also charged with ‘illegally crossing the Russian border’.

Novikov mentions a new ‘witness’ who has emerged claiming that he drove Savchenko from the Ukrainian border to the Voronezh oblast, from another point on the border. He was supposedly taking humanitarian aid to Donetsk, and saw her hitchhiking.  Novikov says that this driver is alleged to have taken pity on her because she looked tired and to have also given her 15 thousand roubles for the journey.  Later he supposedly saw her on television and panicked that he had helped a criminal, but nonetheless decided to inform the authorities….  It makes you want to cry it’s so touching, he comments wryly.

Nadiya Savchenko was taken prisoner in Ukraine by militants whom Russia claims are acting on their own.  She has been in Russian detention since days after her capture and is facing a trial in Russia which becomes more grotesque by the day.