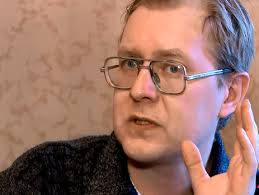 A Russian court has convicted poet and teacher Alexander Byvshev of ‘inciting enmity’ and sentenced him to 300 hours of community service, confiscated his computer and prohibited him from working as a school teacher for two years.  His ‘crime’ – the poem ‘To Ukrainian Patriots’ in which he expresses his opposition to Russia’s annexation of Crimea and suggests Ukrainians should ensure that not one inch of Crimea is handed “to Putin’s chekists”.

Judge Margarita Gridina from the Kromy District Court (Oryol oblast) thus met in full the demands made by the prosecutor.  A month ago Byvshev was also added to Russia’s ‘List of Terrorists and Extremists’, with this resulting in all accounts being frozen.  Over the last month Byvshev’s flat has also come under attack twice, with windows broken both on June 14 and during the early hours of July 12.

“I’m left with only my pen.  I can’t work, my accounts are blocked.  Of course it’s all difficult”, Byvshev said after the sentence.  His lawyer, Vladimir Suchkov, believes the ruling unlawful and plans to appeal against it.  He points out that the judge did not even consider the poem that led to the criminal prosecution during the hearings. Instead she heard the testimony of 40 ‘witnesses’, many of whom, it transpired, could not remember a single line of the poem which allegedly offended them.  Some of their statements are reported here.

Byvshev posted his poem ‘To Ukrainian patriots’ on his social network pages on March 1, 2014,   2 days after Russian soldiers without insignia seized control in Crimea.   The criminal proceedings against him were initiated in the middle of May.  He was charged with “stirring up hatred or enmity, as well as denigrating human dignity” (Article 282 § 1 of the Criminal Code).  The Sova Centre in Moscow which monitors both extremism and hate speech reported that it was Byvshev who had become the target of a hate campaign.  It pointed out that an article published in a local newspaper had been totally in the style of Stalin’s campaign against so-called ‘cosmopolitanism’.

The same Kromy court which has now convicted him first ruled on Oct 3 that the poem was ‘extremist material’.  According to Byvshev an original assessment from the Moscow-based Guild of Linguistic Experts which did not find any extremism was ignored and sent to the relevant department of the regional police.  There, of course, Byvshev says, they found all that was required – negative utterances about a social or ethnic group; incitement to inter-ethnic enmity, calls to unlawful actions, the works.

Another linguistic assessment was initiated by the Russian Centre for Countering Extremism. Ludmila Vlasova from the Oryol State University concluded that “the hostile nature of the statements related to Russians in the poem is expressed in expressions regarding Russian state bodies and President Putin (“not one inch of Crimea to Putin’s chekists”).”  She asserted that they contain direct and covert calls to Ukrainian patriots to carry out physical and other actions in relation to the enemy – Russians:  to meet the enemies like their ancestors did; to prepare and hold weapons in readiness, etc.  This, she claimed, meant that the poem “To Ukrainian Patriots” contains statements which denigrate Russians.

These poems and many others were previously available on the Internet and have now been removed. Most disturbing is the fact that Wikipedia has pandered to Russia’s offensive against free speech. It has removed the Russian entry on the poet altogether, and the English avoids any mention of this, while citing as sources texts which specifically mention Wikipedia.

Please see and circulate excerpts from Byvshev’s final address to the court here.  Byvshev is caring for elderly parents in ill health and has been prevented from working in his profession, or even accessing his own bank accounts.  This court trial and verdict are clearly aimed at sending a warning to other Russians to keep their heads low.  They are chillingly reminiscent of some of the worst methods used in Soviet times.