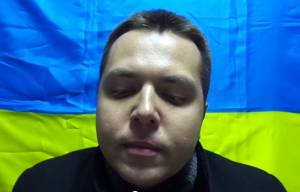 37-year-old Yury Ilchenko was arrested on July 2 and remains in detention, almost certainly over an article condemning Russia’s annexation of Crimea and calling for an end to Russia’s war against Ukraine. This, in Russian-occupied Crimea, can earn you criminal prosecution for so-called ‘extremism’.

The Crimean Human Rights Field Mission is still trying to establish details of the charges against Ilchenko, and a lot remains unclear.  Radio Svoboda’s Crimean Service spoke with his father a week after his son was arrested and taken from Sevastopol to the SIZO [pre-trial detention centre] in Simferopol.  The case against Ilchenko, who owns a private language school in Sevastopol, is being run by the Sevastopol department of Russia’s Investigative Committee.

It was officers from both the Investigative Committee and Russia’s FSB who turned up on July 2 and carried out a search of the home which Yury shares with his parents.  The search, which lasted around 4 hours, produced nothing.

Gennady Ilchenko clearly shares his son’s views on Russia’s annexation of Crimea and aggression in Ukraine.  They are accusing his son of ‘extremism’, but what do they call the war, he asks. It sounds as though at least Yury Ilchenko has been questioned by the FSB many times.  They grilled him, for example, on why he didn’t give up his Ukrainian citizenship, and take on Russian citizenship.

Judging by his father’s words, the events on July 2 did not come out of the blue.  Gennady Ilchenko says that his son had asked him to buy tickets for all of them to Lviv after he learned that a criminal case over ‘extremism’ had been initiated.  The tickets were bought and returned several times.  They didn’t sell the flat since they didn’t know how to get the money to mainland Ukraine.  They also hesitated as his mother is disabled and it was no small thing to up and move, when it wasn’t clear what they would be going to, particularly since Yury’s language school was doing well.

The family has found a lawyer – Yury Berdnikov – who has visited Ilchenko in SIZO, and said that his psychological state arouses concern.  This seems hardly surprising given charges of ‘extremism’ for expressing his views on recent events, and other hypotheses seem at the very least premature.

One disturbing detail is that the prosecution clearly hoped to charge Ilchenko with ‘terrorism’ as well.  His father says that a week before his arrest, a woman he didn’t know turned up suggesting that he take part in distributing leaflets in Sevastopol calling on people to resist the occupiers and set off bombs. Yury told her where to go, his father says.

The FSB has also told his father that they are considering charging him over supposedly improper behaviour with a 12-year-old girl he’s teaching.  It remains to be seen whether they do bring such charges.  Gennady Ilchenko says that his son is friendly with the girl’s mother and that he has even gone on trips with them.  Radio Svoboda points out that it has also become standard in the ‘political cases’ run by the FSB, that a purely criminal article is added.  Unfortunately, very often using planted evidence, as was seen with another Crimean Ukrainian Oleksandr Kostenko.

This is by no means the first time that Russia is using its loose legislation on ‘extremism’ – and ‘terrorism’ against people whom it clearly sees as ‘dissident’, with ethnic Ukrainians and Crimean Tatars especially targeted.  There are also some worrying anonymous cases over alleged ‘extremism’.