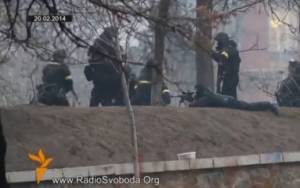 A key suspect, charged with crimes against Euromaidan activists, has failed to appear in court just over a week after he was released from custody.  If he has fled, this will be the second time that a high-profile suspect has vanished after a controversial court ruling.  In the meantime, the trial has finally begun of two former Berkut officers accused over the gunning down of 39 Maidan activists.  They are effectively the only two men so far facing trial for the killings on Maidan in Feb 2014.

On July 20,  the Court of Appeal in Kyiv was due to consider whether to uphold or revoke the decision to remand Oleh Yanishevsky in custody.  As reported here, Yanishevsky, who was working in the police until his arrest in June, was deputy commander of the Kyiv Berkut special force unit in Feb 2014.  He is suspected of having issued orders to kill and is the highest-ranking officer currently in detention.  The hearing was, for the second time, adjourned since the case file had not been sent from the Pechersky District Court.

Yanishevsky’s immediate superior Dmytro Sadovnyk was arrested in April 2014.  He was remanded in custody, but then on Sept 19 released by Judge Svetlana Volkova from the Pechersky District Court.  By Oct 1 it became clear that Sadovnyk had fled.

It now seems likely that Tavakul Ragimov has also gone into hiding after being released by Kateryna Sereda from the same Pechersky District Court.  Pavlo Dykan, one of the lawyers representing Maidan victims began his account of the ruling with the word ‘Déjà vu’.   He explains that the Ragimov case is one of the few which has been effectively solved, with the believed perpetrators arrested.  “Tomorrow the case is to be sent to the court and at this point the key suspect gets released from custody.”  He suggests that Judge Sereda is repeating the scenario first applied by Judge Volkova with respect to Sadovynk.

Dykan goes on to recount how a young Kyiv resident was suddenly attacked in the evening of Jan 21 2014 near the Petrivka Metro.  The investigators are convinced that his assailants were titushki, paid thugs from the Kharkiv organization Oplot.  They had been brought to Kyiv to organize and carry out various forms of provocation, intimidation, abduction, torture and other crimes against Maidan protesters.  The young man, who in fact had no connection with Maidan, was knocked to the ground and beaten up before being dragged into a bus and taken away.  The investigators are convinced that the person in charge in the bus was Ragimov, a police officer.  The young man was interrogated about alleged involvement in Euromaidan,   about the Maidan leaders, etc. He was threatened and beaten in the bus, then at a titushki camp on the outskirts of the city.  The beating and torture at the camp is believed to have been with the involvement of Yevhen Zhilin, head of Oplot.  The latter only released the young man after several hours, having finally ascertained that he wasn’t connected with Maidan.

Ragimov had been arrested in Spring 2015.  He is charged with group hooliganism using objects intended to cause injury; robbery linked with life-threatening violence; abduction by prior group conspiracy with the inflicting of physical suffering, as well as threats to commit murder.  The maximum sentence for these charges is 7 years imprisonment.

Instead Judge Sereda released him with the only stipulation being that he remained at home during the night. Dykan points out that Sereda was transferred to Kyiv from Zaporizhya on Feb 13, 2014 by a decree issued by the then President Viktor Yanukovych.

Ragimov was due in court on July 17, but did not appear, allegedly because of ill health.  This was the pretext given for Sadovynk’s failure to appear at the beginning of October 2014.  Late the same evening, Anton Herashchenko, advisor to the Interior Minister Arsen Avakov, admitted that Sadovnyk had gone into hiding.

Sadovnyk’s subordinates  -  Pavlo Abroskin and Serhiy Zinchenko –  were not released in September, and their trial began on July 15.  They are charged with carrying out orders to forcibly disperse and gun down 39 Euromaidan protesters in February 2014.  One of the charges against them is of being part of a criminal conspiracy which means that all members of the conspiracy would be guilty, regardless of their rank.  This is crucial since their superior would have also been carrying out orders which are believed to have come originally from Vitaly Zakharchenko, then the Interior Minister. They are also accused of carrying out an unlawful order from their superior which resulted in the death of 39 people; of  exceeding their powers, and of destroying the weapon of a crime.

The original order is believed to have been to disperse Maidan by force, even using firearms against demonstrators.  This, as we know, is what happened with at least 82 people killed between 18-21 Feb, mainly being gunned down by Berkut officers.

The Berkut unit was sent to Institutska St in the centre of Kyiv on Feb 18.  However, the prosecution asserts that the greatest number of deaths occurred after one Berkut officer was killed and another injured.  It contends that other Berkut officers did not especially care who had fired the shot, and simply wanted revenge. The investigators say that the men began aiming to hit people who were fairly far away from them, but not so far that it wasn’t easy to tell that they were firing at unarmed people who posed no danger to them.  39 people were killed, the prosecution asserts.  An additional charge has been added because the weapons used to carry out the killings were destroyed or hidden.

There have been three hearings so far, reported by Maria Lebedeva from LB.ua.   After the initial hearing read out all the charges, with each of the 39 victims separately named and their injuries described, the second hearing questioned the relatives of four people who were killed: Edward Hrynevych; Ihor Kostenko; Maxim Shymko and Serhiy Baidovsky.

Ihor Kostenko, who was 23, was together with Ustim Holodnyuk, who was just 20.  Both men died of gunshot wounds, but the shot which killed Ihor is known to have come from Institytska St where the Berkut unit was positioned, while Ustim was killed by a shot from the direction of the Ukraina Hotel.  His murder is in a separate case with no suspects as yet.

Both Abroskin and Zinchenko deny all the charges, with Zinchenko asserting that he never used any weapon.  Judging by the questioning, their defence lawyers appear to be concentrating on the lack of proof that specific fatal shots were fired by the defendants.