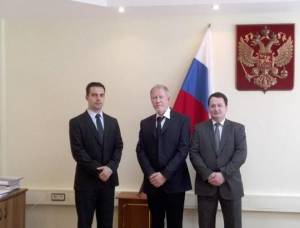 According to Márton Gyöngyösi, Hungarian MP from the far-right Jobbik party, members of his party have already received an invitation “from the Russian side” to visit Russian-occupied Crimea.  The visit, he says, will take place in the autumn with the exact date to be announced in the coming weeks.  He told Sputnik that members of the Jobbik party “considered to represent the party at the highest level” had been invited.

Gyöngyösi’s statement comes just a week after 10 French politicians, many known for their unwavering support for the current Moscow regime, visited Crimea and claimed, among other things, that the rights of the Crimean Tatars were fully respected (see : The High Price of French Collaboration).  The French trip flouted the official French position and breached both Ukrainian and international law. It is illegal to enter occupied Crimea except via Ukraine which the politicians did not do.  Ukraine has now initiated criminal proceedings and banned the 10 politicians from entering Ukraine.

Members of the Jobbik party have already demonstrated their loyalty to Moscow and willingness to breach international law.  Béla Kovács was one of the ‘observers’ whom Russia brought in on March 16, 2014 to praise its pseudo-referendum on Crimea.   Márton Gyöngyösi held a press conference shortly afterwards at which he announced that “Jobbik considered the Crimean vote as the triumph of a community’s self-determination.”

Radio Svoboda’s Crimean Service spoke with a member of the Sevastopol Jewish community about the announced visit.  He believed that the politicians could come as guests, but that the visit should not be politicized due to their “commitment to far-right anti-Semitic views”.

“We were all afraid that far-right politicians would come to power in Ukraine, we were against it. How are the Hungarian far-right better than the Ukrainian far-right?”, the unnamed Sevastopol resident asked.

Official denials from Jobbik about its anti-Semitic, anti-Roma and homophobic views are hardly worth mentioning in the age of the Internet.  Márton Gyöngyösi, for example, is reported to have proposed drawing up a list of people in the country "to see how many are of Jewish origin and present a certain national security risk to Hungary." He apparently later ‘apologized’.

Jobbik is certainly not the only party with anti-Semitic, racist, far-right or even neo-Nazi views who appear to have close relations with the Kremlin.  For ideas as to why, should they not come to mind, see Michael Orenstein’s study of “why Europe’s far-right is on the Kremlin’s side”.

Gyöngyösi claimed that members of his party were in contact with the Crimean authorities, members of the media and with Crimean Tatar activists.  The First Deputy Head of the Mejlis [representative assembly] of the Crimean Tatar People told Radio Svoboda that the Mejlis has had no contact with Hungarian politicians for the last 18 months.  This is no surprise.  Meetings were organized for the French politicians with those Crimean Tatars who have chosen to cooperate with the occupation regime and who could be relied on to say ‘the right things’.  They will doubtless be brought in to repeat their rejection of undeniable rights violations for the benefit of the far-right Jobbik politicians as well.