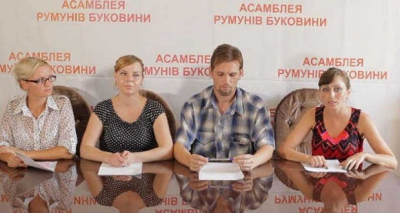 If you believe media reports, ethnic Romanians in Ukraine’s Bukovyna are now also demanding autonomy.  The road from a cheap fake to a feature in the International Business Times, quoting a “report’ was swift, effortless and dangerously effective.  It is not the first such attempt to fabricate secessionist demands in Ukraine*, and the media really should be more on their guard.

The first report of a founding conference of the so-called ‘Assembly of Romanians of Bukovyna’ was posted on July 27 by nr24.org, and from there by Korespondent.net, one of the media still owned by millionaire Serhiy Kurchenko.  The latter massively increased his fortune through close contact with ex-President Viktor Yanukovych and, like Yanukovych, is hiding out in Russia.  The initial report on nr24.org is no longer available, but then it’s hardly needed, having been uncritically reposted by numerous websites before the first more vigilant media sounded the alarm.

The conference announced that they were demanding only autonomy within Ukraine, because they needed to “safeguard the rights of Romanians living in a Romanian province, which is now part of Ukraine.”  After the events in Mukacheve earlier in July, they allegedly claimed,  the Romanians of Bukovyna can no longer feel safe.

By July 30, the first English report had emerged.  The Kremlin-funded Sputnik claimed to simply be passing on media reports.  It ended by mentioning, without any identifiable links, apparent demands from “many in Romania … to make use of the situation in neighbouring Ukraine to win back their “lost territories”.

Thomas Barrabi writing for the International Business Times presumably found this a good enough story to repeat immediately, with his own additions.  Sputnik’s pro-Kremlin line is well-known and Russia’s interest in fuelling, exaggerating or even inventing secessionist sentiments in Ukraine has also been widely noted and analysed.  This makes its use as a source for the IBTimes report at very least strange.  So too are other aspects, such as the caption under the photo.

“Members of the National Guard of Ukraine lined up after military tactical exercises at a training base near Kiev, Ukraine, July 22, 2015. The Assembly of Northern Bukovina Romanians seeks political freedom “to safeguard the rights of Romanians living in a Romanian province." Reuters. “

Reuters is the source only of the photo, and has nothing to do with the alleged claims of a fictitious Assembly. The first paragraph is alarming:

It is only midway through the third paragraph that we learn that the source of information is the “Russian agency Sputnik International News”.  The uninitiated reader would be unlikely to pay that much heed and can then promptly forget it as only one of the organizers of this alleged ‘founding conference’ is quoted as though heard directly by the author.  Barrabi then informs his reader that “a similar dispute was at the heart of Kiev’s clashes with pro-Russian separatist rebels in eastern Ukraine, which have killed more than 6, 400 people since the conflict began in early 2014. Various rebel groups have sought to form their own autonomous government within Ukraine”.

No mention of Russia’s highly active role in this ‘dispute’ which has been acknowledged and condemned by the EU, Parliamentary Assembly of the Council of Europe, NATO, to name but a few.

Instead, just in case anybody had failed to understand what a hotbed of separatist sentiments Ukraine is, Barrabi’s last sentence should clinch it:

Bukovyna journalists and representatives of the ethnic Romanian community have slammed the reports and the supposed founding conference as total lies.

Chernivtsi photographer Mykola Havka has demonstrated that the reports were a shoddy fake.  He explained to Molbuk.ua that he had been dubious as soon as the first report appeared on nr24.org.  Using the Jeffrey Exif Viewer, he discovered that the photograph of the people sitting in front of a banner with the words ‘Assembly of Romanians of Bukovyna’ had been produced on July 19, 2015, 8 days before the supposed conference.

It is unlikely, Molbuk.ua writes, that the photo was even taken in Chernivtsi   Arkady Opaits, Head of the League for the Defence of the Rights of National Minorities, believes that the Kremlin was behind the fake.  The idea, he told Molbuk.ua, was to throw a ‘cheap bone’ at the Internet and see which hungry dogs grab at it.   It is the Kremlin, he says, that is making every effort to destabilize the situation in Ukraine, including in its western oblasts.

It is certainly a primitive fake since neither Opaits, nor his colleagues who have connection with Romania have ever set eyes on any of the people in the photo.

The people in Bukovyna, he adds, have very good and friendly relations with Romanians.  He should know, as he headed the Society of Romanian Culture for 12 years.  He points out that Romania was one of the first countries when Euromaidan began to support Ukraine at international level and he therefore hopes that the media will not swallow such an obvious fake.

Whether or not the journalists who snapped up the news can fairly be called ‘hungry dogs’ is for the reader to decide.  Dogs normally sniff offerings to check whether they’re safe to eat.  It is practice the media would be well-advised to follow.

*  See also  ‘Separatism’ in Lviv – For Money and Russian Propaganda