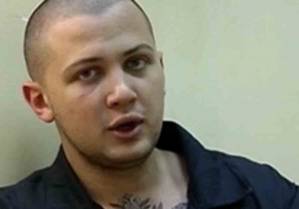 Gennady Afanasyev has told his lawyer of the torture he faced after being arrested in Crimea on May 9, 2014, about the pressure and threats immediately prior to his appearance in court last Friday, and that he has faced since he retracted the testimony he signed under torture.

Afanasyev is one of four opponents of Russia’s annexation of Crimea who were arrested in May 2014, held incommunicado for a couple of weeks then taken illegally to Moscow.  He and Oleksy Chirniy both ‘confessed’ and ‘cooperated’ with the investigators for a minimum 7-year sentence.  Their testimony is all that the prosecution has against renowned Ukrainian film director Oleg Sentsov and virtually all against antifascist activist Oleksandr Kolchenko.  The latter did assist in a  firebomb attack late in the night on the office of the United Russia party, however this does not constitute the act of terrorism he is charged with.

Afanasyev was brought to court on Friday, July 31, to testify against Sentsov and Kolchenko.  Instead he told the court that he was not only refusing to testify at the trial, but that he was retracting all previous testimony which had been given under pressure. His hand was trembling as he carried out an act which undoubtedly required great courage.

Lawyer Alexander Popkov told journalists what he had learned when he visited Afanasyev in prison on Monday. Afanasyev says that he was detained by masked men as he was heading for the Victory Day parade.  They began beating him and took him away, in handcuffs and with a bag over his head, in their car.  They demanded that he name certain people and give testimony against Sentsov, who seemingly even then was intended as the main ‘suspect’ in the FSB’s ‘terrorist plot’.

Afanasyev was made to lie on the floor during the search of his home.  All his photographic equipment simply disappeared, with no mention of it in the search protocol.

At the FSB offices in Simferopol he was interrogated by investigator Artem Burdin from Moscow who wanted him to confess to involvement in plans to blow up the Lenin monument and Eternal Flame.  When he said that he knew nothing about any such plans, they took him upstairs and began beating and torturing him.

“They beat him in front of Burdin and other operations officers, using gloves and hard, in the chest, the stomach and around the head. Then they put a gas mask on his head and began squeezing the hose part, then they sprayed something into it which made Afanasyev vomit straight into the mask. They tortured him with electric shocks, including by attaching wires to his genitals.  In the Moscow Lefortovo SIZO [remand prison], he was no longer beaten, he says, but the same officers as in Crimea were there.

Afanasyev told the lawyer that he had been brought to Rostov on the Don for his appearance as prosecution witness in the trial of Sentsov and Kolchenko on July 24. Three days later he was visited in the prison by an FSB officer who identified himself only as “Alexander from Moscow” and who Afanasyev recognized as having been present when he was being tortured in Crimea.  Afanasyev asserts that he was told to repeat his testimony in court and that if he refused, “you’ll go north, to the polar bears and your mother could end up in an accident”.

Afanasyev was in court already on July 30.  Before the court hearing, another FSB officer told him to refuse to answer questions, citing Article 51 of the Russian Constitution. In this way, he said, the defence wouldn’t be able to question him.  Popkov says that Afanasyev was told that the prosecution had reached agreement with the judge regarding this.  He says that Afanasyev was praised for once again, as at the beginning, rejecting the services of the state-provided lawyer.

On July 30, Oleksy Chirniy appeared in court, cited Article 51 and said that he confirmed his testimony given earlier.  This was then read out in full, without any opportunity to ask questions.

After Afanasyev’s appearance and retraction of all testimony, he was taken to a room in the SIZO where an FSB officer threatened him, demanding that he say that the defendants’ lawyers had put pressure on him.

There has been no physical pressure on him, Popkov said.  This is hardly surprising while the trial is still underway and questions could obviously be asked.

The above are, of course, the allegations of one man, however his account corresponds closely to those made from the outset by both Sentsov and Kolchenko.  Sentsov’s cousin Natalya Kaplin writes that “Oleg understands very well why Afanasyev caved in initially. There was a point when he too was prepared to give in. Especially when, after he’d been beaten, they began suffocating him with a bag. They do it very cleverly and not immediately. First they put the bag on and then they cut off the air a bit. When the person begins to lose consciousness, they let up a little by giving a bit of air, but then almost immediately tighten up again. Oleg remembers that he went through this execution three times.  Incidentally, it was not former Ukrainian Security Service traitors who tortured him, but a Moscow FSB group sent to Crimea to establish order.  The Crimean lot, Oleg says, were fairly mild in their treatment. “

Chirniy also told the Ukrainian consul that he had been subjected to torture in Crimea.  There are any number of other suspicious elements in this ‘case’ where the charges against Sentsov are totally dependent on Chirniy and Afanasyev’s evidence.  As reported, Chirniy’s evidence, as per ongoing interrogations throughout 2014 often seems scripted, and there are telling discrepancies.  The same applies with the earlier testimony which Afanasyev has now retracted.  The investigators, he says, dded new episodes at different interrogations, with alleged trips by Afanasyev and Sentsov with food for Ukrainian soldiers (who were effectively under siege following Russia’s invasion) turning into trips to buy weapons.

Popkov added that Afanasyev admits that he took part in the firebomb attacks which damaged the door of one office and a window of another.  He considers that the pro-Russian organizations were Nazi organizations and that activists and others were being beaten in the buildings.  More details about the very direct link with Russia’s occupation and the paramilitaries who helped can be found here.

Afanasyev denies that his participation in the two firebomb incidents constituted terrorism and how says he wants to seek a review of the case.

For almost 14 months the focus was on the two men - Oleg Sentsov and Oleksandr Kolchenko – who had stood firm and denied all guilt from the beginning.  This was always a difficult position to take since all four men were at the very least facing quite disproportionate charges.  It has now become quite untenable and all four men should surely be viewed as political prisoners and a retrial demanded at least for Afanasyev.